The FBI Infiltrated Gay Orgs During the Purple Scare of 1961

The FBI on Friday released nearly 750 pages of documents from the bureau’s file on controversial lawyer Roy Cohn, whose clients included President Donald Trump when Trump was a fledgling real estate mogul in New York City.

“Where’s my Roy Cohn?” Trump has been quoted lamenting when he was faced with political and legal pressures.

The FBI on Friday released nearly 750 pages of documents from the bureau’s file on the late Roy Cohn, the controversial, hyper-aggressive lawyer whose high-profile clients included President Donald Trump when Trump was a fledgling real estate mogul in New York City.

“Where’s my Roy Cohn?” Trump has been quoted lamenting when he was faced with political and legal pressures.

Cohn was famous — and infamous — for his work for Sen. Joseph McCarthy of Wisconsin in the 1950s investigating suspected infiltration by communists in U.S. government agencies, as well as his role prosecuting Soviet spies Julius and Ethel Rosenberg, who were executed for stealing American atomic secrets.

In the Rosenberg case, Cohn later admitted to conversations with the trial judge outside of the presence of the Rosenberg lawyers — a serious ethical breach by both Cohn and the judge.

Stone currently is under indictment for lying to Congress, witness tampering and obstructing justice, charges related to his alleged efforts to get WikiLeaks to release emails stolen from Democrats during the 2016 presidential campaign. He has pleaded not guilty in that case.

The release of the FBI’s Cohn files comes on the heels of a new documentary that uses Trump’s quote “Where’s my Roy Cohn?” as its title.

The vast majority of the FBI files include details of an investigation into Cohn for perjury, conspiracy and obstruction of justice in connection with a grand jury probe of an alleged $50,000 bribe Cohn paid the then-chief assistant U.S. attorney in Manhattan to keep several stock swindlers from being indicted in 1959.

Cohn was found not guilty after a trial in that case in 1964.

A number of the files were sent directly to J. Edgar Hoover, the FBI’s director at the time, and reflect the bureau’s painstaking efforts to acquire information about trips by Cohn to Las Vegas in 1959, and other evidence, in connection with the bribery case.

One memo that was sent in July 1962 to both Hoover and then-Attorney General Robert Kennedy details the claim by a source of the FBI’s Las Vegas office.

The source said that gamblers in that city, worried about “extreme pressure” being applied by the federal government on the Nevada gambling industry, had approached the Justice Department’s criminal division chief “to determine whether he would ‘trade Las Vegas’ for ‘Roy Cohn.’”

A small part of the files released Friday include a letter that Cohn sent Hoover in 1969 when Cohn was being prosecuted on other federal criminal charges, for which he ultimately was acquitted.

The Washington Post in 2016 described an early meeting between Trump and Cohn in 1971, at a hot spot called Le Club..

“Trump introduced himself to Cohn, who was sitting at a nearby table, and sought advice: How should he and his father respond to Justice Department allegations that their company had systematically discriminated against black people seeking housing?”″ The Post reported.

“My view tells them to go to hell,” Cohn said, according to the Post. “And fight the thing in court.”

Cohn died in 1986 from complications of AIDS, less than two months after being disbarred for professional ethics violations.

Despite years of using rumors about the homosexuality of his foes to smear them, Cohn himself was gay. He claimed until his death that he had liver disease, not AIDS.

Cohn’s closeted sexuality, ruthlessness against alleged communists and role as a bete noire of the left in the United States led to him being featured as a prominent character in Tony Kushner’s landmark play, “Angels in America.” Al Pacino portrayed Cohn in the HBO adaptation of that drama.

NBC archive footage shows Trump partying with Jeffrey Epstein in 1992
Cohn was one of two personal lawyers for Trump to be disbarred, in his case for a range of misconduct.

Trump denies having sex with Daniels or with another woman, Playboy model Karen McDougal, who received another hush money payout before the 2016 election that was facilitated by Cohen.

Earlier this week, a relative of Cohn’s wrote a column for Politico Magazine entitled “I’m Roy Cohn’s Cousin. He Would Have Detested Trump’s Russia Fawning.”

“Roy often told me the Kremlin blamed the U.S. for Russia’s failure to prosper, so Russian leaders were bent on destroying our democracy. If Roy had lived another 30 years, I’m sure he’d be pleased to learn that his protégé was elected president. But I am equally sure Roy would be appalled by Trump’s obsequious devotion to ex-KGB officer Vladimir Putin.”

Some Times There is a Story That Makes You Smile: Kidnapped Boy 5 Saved by FBI Agent, Now 22

SHANNON VAN SANT
NPR
Special Agent Troy Sowers wanted something simple for his retirement from the FBI. "I asked for coffee and doughnuts," he said.
Instead, he got a surprise: a visit from the baby boy he rescued from a kidnapper 22 years ago on one of his first assignments in the FBI.
In 1997, Sowers was new on the job at the FBI's Tacoma Resident Agency when a woman posing as a doctor kidnapped a newborn baby boy from St. Clare Hospital in Lakewood, Wash.
Sowers and his colleagues began an arduous, 19-hour search for the infant. After the kidnapper was apprehended by police, she led Sowers to the baby boy. Hours before her arrest, the kidnapper had left the infant in a cardboard box behind a convenience store.
Sowers is retiring from the FBI as special agent in charge of the bureau's field office in Knoxville, Tenn. At his retirement ceremony on Friday, his colleague, Knoxville Assistant Special Agent in Charge Sherri Onks, held up a photo of a Marine.
The FBI reports:

Rembert said it was a privilege to meet the man who saved his life. "I was just really ecstatic, that they would come to me 22 years later," Rembert said.
Rembert, now a corporal in the Marines based out of Camp Lejeune, said he didn't learn about the kidnapping until he was about 5 years old.
"I was happy to tell him that I'm living a good life, and I'm going to continue living a good life," Rembert told the FBI. "His efforts that day, and all of his efforts since, made a difference."
Sowers said meeting Rembert was a great surprise. "I'm proud of anybody that serves others above themselves," said Sowers. "The fact that he is now doing that makes that case even more special."
Over 5.6 Million Reads Adam Gonzalez at August 13, 2019 No comments:

Email ThisBlogThis!Share to TwitterShare to FacebookShare to Pinterest
Labels: FBI

Trump's statements appear to have backed off a bit from the defiant attack on Democrats for a "search and destroy strategy" against the nominee that he tweeted Thursday night.
Speaking to reporters at the White House before a meeting with Chile's President Sebastián Piñera, Trump said that undecided senators must do what makes them "comfortable" regarding his nomination, adding that he had "no message whatsoever" for the senators who now face a vote to confirm Kavanaugh as a Supreme Court Justice.
"They have to do what they think is right," he said. "There is no message whatsoever. They have to do what they think is right. They have to be comfortable with themselves and I’m sure that’s what they want."
The Senate Judiciary Committee on Friday voted to advance Kavanaugh's nomination, but only after Republican Sen. Jeff Flake called for a one-week delay on a final vote to allow the FBI to investigate the sexual misconduct allegations.

Flake said he would oppose moving forward with Kavanaugh's nomination in the full Senate if Republicans try to bring it up before then.
Asked about the delay, Trump said, "I’m going to let the Senate handle that."
"They’ll make their decisions," he added. "They’ve been doing a good job and very professional. I’m just hearing a little bit about it because I’ve been with the president of Chile and we're talking about some very important subjects. I’m sure it will all be very good."
"I guess the vote was a positive vote but there seems to be a delay. I’ll learn more about it as the day goes on. I just heard about it because we were together."
Look at Senator (R) Jeff Flake. His face shows all the turmoil he is going through and his disagreement at all the political wrangling. Getting an FBI investigation should be the least to ask about of an appointment of this magnitude when there is a credible testimony from a credible witness about Kavanaugh's behavior and maybe lying under oath.
Thanks to Se. Flake, there will be an FBI investigation and this locomotive will be delayed one more week or so until the FBI is done.
Over 5.6 Million Reads Adam Gonzalez at September 29, 2018 No comments:

ComeyTells The Nation What Most of Us Already Know, "Trump is a Serial Lier" 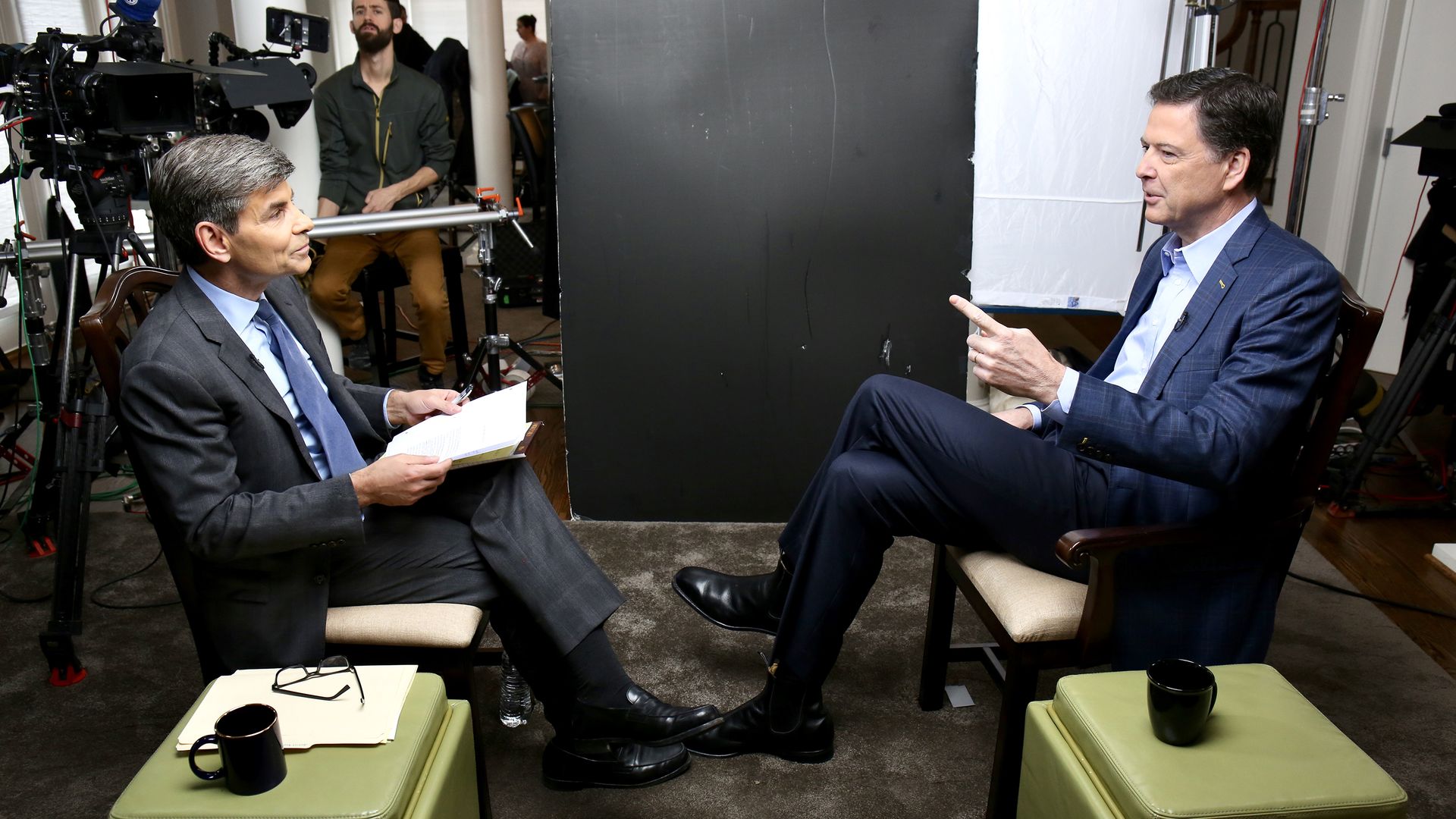 In an exclusive interview with ABC News Chief Anchor George Stephanopoulos on "20/20" tonight, former FBI director James Comey said that Trump is "morally unfit to be president" and that the American public was "duty bound" to vote him out of office in 2020.
His key line: “You cannot have, as president of the United States, someone who does not reflect the values that I believe Republicans treasure and Democrats treasure and independents treasure. That is the core of this country. That’s our foundation. And so impeachment, in a way, would short-circuit that.”
More hot quotes from Comey in the ABC interview, some first obtained by the NYT:
Over 5.6 Million Reads Adam Gonzalez at April 16, 2018 No comments: