BBC
Twitter has suspended hundreds of accounts for spreading claims about a Washington DC "blackout" which never happened.
Amid widespread civil unrest in the US, thousands to tweets using the #DCBlackout hashtag claimed that communications had been blocked in the capital to cripple protests.
But there was no evidence of this.
Twitter also said it had banned an account for inciting violence while impersonating a protest group.
The #DCBlackout hashtag trended on Twitter on Monday, with millions of tweets and retweets claiming that internet and phone communications were cut late in the night as the protests continued.
But reporters covering the protests had no such problems, and Twitter collated several of their tweets into a prominent link in Twitter's main website sidebar. An internet monitoring service also said there was no indication of any widespread disruption.
A Twitter spokesperson said the social media site had "suspended hundreds of spammy accounts" that used the #DCBlackout hashtag, citing the company's platform manipulation and spam policies. Straight from the disinformation playbook
By Shayan Sardarizadeh & Olga Robinson, BBC News
The DC blackout hoax is a classic example of an internet rumour spiralling out of control.
The hashtag first started going viral on Twitter in the early hours of Monday. Panicky messages about a blackout also spread on Facebook, Reddit and later on Instagram too.
Some of the most shared posts were sent by users who were not based in Washington DC or even in the US.
Despite the lack of evidence of a blackout, the hashtag garnered more than 500,000 tweets from 35,000 unique accounts in a matter of hours and became a global trend.
Skip Twitter post by @VictoriaSanchez
End of Twitter post by @VictoriaSanchez
Concerned residents in and around Washington DC then saw the trend on their social media feeds and began posting about it to find out what was going on.
So by the time Twitter removed it from its "trending topics" list, the claim may have been seen by millions worldwide.
This is a playbook we have seen over and over again.
When a major event is developing, rumours and claims about an emotional topic can go viral without any evidence to support them.
Twitter also suspended another account which claimed to represent the left-wing Antifa group, calling for violence.
But the antifa_us account turned out to be operated by a known white nationalist group operating under an assumed name, Twitter told US media.
Before it was suspended, it tweeted messages including: "Tonight ... we move into the residential areas ... the white hoods ... and we take what's ours".
"Antifa", a contraction of anti-fascist, refers to the loosely-organised far-left protest group that gained fresh prominence in the US after the controversial white supremacist rally in Charlottesville in 2017. Anti-fascists routinely organised counter-demonstrations at far-right events in the months afterwards - sometimes resulting in violent clashes.
The use of the label is controversial because, as the Anti-Defamation League writes, it is sometimes used "to include all counter-protesters, rather than limiting it to those who proactively seek physical confrontations with their perceived fascist adversaries".
Since the outbreak of violent civil unrest, President Trump has blamed Antifa for riots, and declared he would designate it a terrorist group - though it is not not clear he has the power to do so.
A Twitter spokesperson said the company noticed the account after it sent tweets inciting violence, and that it was eventually suspended for violating policies on fake accounts.
Prof Philip Howard from the Oxford Internet Institute said that while Twitter was taking action, conspiracy theories and polarising stories keep returning.
"It is difficult to know how much impact misinformation on any particular topic has. But people do still circulate it," he said.
"The platforms are doing more and more to keep fake news in check. But each platform is different, and a large number of junk news stories come back in new forms, with new links and on new channels, very soon after it gets taken down."
Over 5.6 Million Reads Adam Gonzalez at June 03, 2020 No comments:


Although Donald Trump has repeatedly appeared in Time Magazine in the last year, the company is asking that a framed image of Trump on its cover be taken down from several golf clubs.
That's because the cover hanging in several Trump Organization clubs is a phony, a Time spokesperson confirmed to NBC News.
March 1, 2009, the cover was first identified as fake by the Washington Post in a story published on Tuesday, and several markers give away that the cover isn’t genuine. Fake Trump Time Magazine cover hangs at Mar-a-Lago
The magazine's red border is thinner on the Trump cover than a real cover and is missing a thin, white border on the inside of the red. A barcode in the right-hand corner is the same as a design tutorial created by a Peruvian designer, according to the Post.
Headlines on a real cover appear across the top of the page. The fake cover’s headlines appear down the right side.
Another factor complicating the authenticity of the Trump cover — Time didn’t publish a March 1, 2009, cover, according to the Post. It published a cover featuring actress Kate Winslet the following day.
On the mocked-up cover, which is framed and hung in some of the Trump golf clubs, according to the Post, Trump appears with arms crossed beneath a banner that reads, “TRUMP IS HITTING ON ALL FRONTS … EVEN TV!”
In the lower left corner, beneath Trump’s name, a headline reads, “The ‘Apprentice’ is a television smash!"
Other headlines discuss real stories that appeared in the Kate Winslet issue, including a story about then-President Barack Obama’s plan for healthcare and another about global warming.
It’s unclear who mocked up the fake cover and why, and it’s also not known if Trump himself was ever aware of the fake cover.
The Trump Organization did not immediately respond to NBC News’ request for comment.
Washington Post reporter David Fahrenthold, who broke the story, said he had tallied seven locations where the cover was spotted as of Wednesday morning and was continuing to look for additional sightings.
Scott Keeler, a photojournalist for the Tampa Bay Times, posted a photo on Twitter of the framed Time cover hung on the wall of Trump’s Palm Beach resort Mar-a-Lago.  Despite the fake cover, Trump has appeared on the front of the magazine several times. First, before he got into politics, Trump appeared on a 1989 cover holding an ace of diamonds next to his face.
The teaser read, “This man may turn you green with envy — or just turn you off. Flaunting it is the game, and Trump is the name.”
After announcing his campaign to become president and his election, Trump has appeared on the cover of Time in both photos and illustrations more than a dozen times. 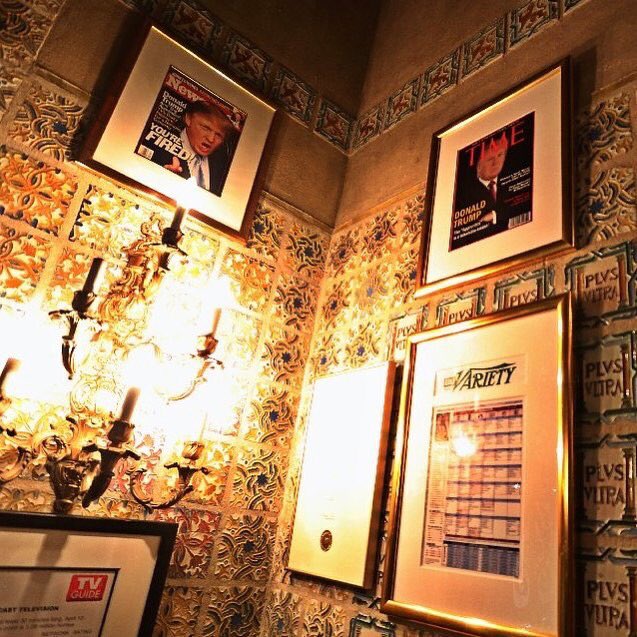