Police Declares Martial law in Ferguson and look at the weapons they got! 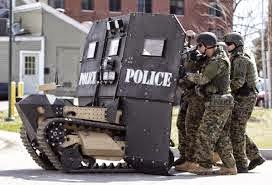 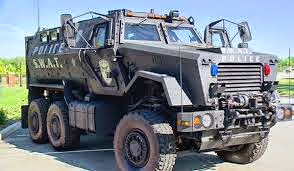 Never was the police on this nation supposed to take the place of the armed forces or even look like our armed forces. Explosives which is the main attack tool of most of our enemies do not get stopped by automatic weapons, tanks and armored personnel carriers.

This is a precisely what is happened with a new law passed after 9/11. The pentagon supplies for free or the equipment they feel they no longer needs. Ferguson is been one of the best beneficiaries asking  for even a tank and getting it. Makes no mistake with particularly the low level of sophistication on dealing with the public and demonstration these type of  police suffer on most of the southern states.

It will stay like that until the police one day makes a Kent State happen again. Then maybe this law can be taken off the books or amended simply because the police should never be a heavily fortified and armed force. 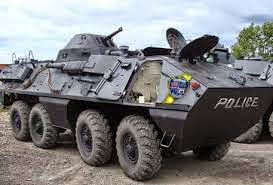 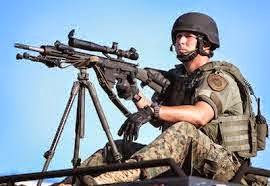 Armored personnel carriers and officers wearing body armor and carrying assault rifles greeted demonstrators. When the crowd ignored orders to disperse, officers unleashed tear gas and rubber bullets, witnesses said. Reporters and other men/women have been hit by tear gas canisters and other projectile weapons, including "rubber bullets". Name of the officer who shot Michael Brown still not being released. Police have closed down the city and implemented a curfew without any constitutional or other lawful authority.
St. Louis and Ferguson police are using the excuse that they have not had a chance to have a "drill" for martial law so they think that gives them the authority to use stun grenades, rubber bullets, tear gas, and other projectile weapons.﻿

Over 5Million Reads Adam Gonzalez at August 15, 2014 No comments: Links to this post