Olympic Gay Athlete Wants Putin to get to Know Him 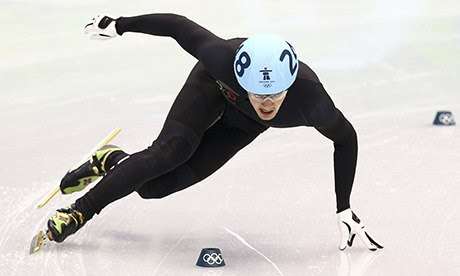 Blake Skjellerup came out as gay after competing at the 2010 Winter Olympics. Photograph: Alex Livesey/Getty Images
If, as he hopes, Blake Skjellerup becomes the first openly gay athlete to compete at the Winter Olympics in Sochi, he will travel to Russia on a twin mission: to strive, with every ounce of his being, to make the podium – and to do everything he can to throw the spotlight on what he calls Russia's "oppressive" anti-gay propaganda law.
Skjellerup, a 28-year-old speed skater from New Zealand who found the confidence to come out after competing in the 2010 Winter Olympics, expects to find out whether he has qualified for the 500m on Thursday. If he makes it, he intends to wear a pin with the rainbow colours of the gay rights movement – and to send a stark message to Vladimir Putin.
"I will be myself in Russia," he says. "And at the moment that is illegal. My goal is to inspire, encourage and offer support to LGBT [lesbian, gay, bisexual and transgender] people in Russia.
"I would love for Putin to get to know me. I would tell him how much I disagree with his oppressive anti-gay propaganda laws, and that he has a responsibility as the president of Russia to represent all the people of his country."
Last week, while competing in Kolomna in Russia, Skjellerup arranged a secret meeting with gay activists to find out how bad things are in the country. While reluctant to give too much information in case it identifies those people he spoke to, he admits the stories he heard "chilled him".
"It was emotional to hear what they were going through," he says. "They were afraid on so many levels. The law is very discriminative and oppressive and it's leading to greater violence against LGBT people. At the weekend two gunmen opened fire at a gay club in Moscow and such acts are not uncommon. For many the only choice is to go undergound."
Under Russia's anti-gay propaganda law, anyone promoting "non-traditional sexual relations" to minors face fines of up to 5,000 roubles (£100), while businesses and schools could get fines up to 500,000 roubles (£10,000). But Skjellerup, who was bullied in high school because he was different, says that if young gay people have no one to turn to, their feelings of isolation are likely to be exacerbated.
"In New Zealand, youth suicide among those who identify themselves at LGTB is much higher than those who do not," he says. "These kids feel so alone and isolated that they resort to suicide. I was bullied as a kid and without my dream of competing in the Olympics I don't know how I would have coped."
"School was never very fun," he adds. "I'm not a religious person but I would go home and pray that I would wake up and I would not be gay. Why would I do that? I wanted it to go away. But it wasn't going anywhere and it was never going anywhere. It's who I am. I didn't come out publicly until after Vancouver in 2010. And since then I have been the happiest I have ever been."
For now, Skjellerup must wait to see whether he has earned enough points in four qualifying events to qualify for Sochi. If he does, he plans to sell rainbow pins to raise money to help fund his training and support Russian gay groups.
But should the Olympics even be in Russia in the first place? "I have a conflicting opinion," he admits. "The IOC says the Olympics is not just about competition but also about education, diversity and friendship – and the anti-gay propaganda laws certainly do not ally with that. So personally I believe a country's human rights record should be considered before awarding it an Olympic Games.
"On the other hand, Sochi gives us an opportunity to highlight Russia's anti-gay propaganda laws and say: this is wrong. Don't underestimate how powerful that could be."
Skjellerup has met a few openly gay athletes, including the NBA player Jason Collins, who support his stance on Russia. And he hopes the image of him competing in Sochi will inspire future generations the way Jessie Owens inspired black Americans by winning the 100m to the displeasure of Nazi Germany in 1936.
But in the unlikely event of making the podium on Sochi, he says he would not consider the equivalent of a black power salute. "The image will be enough," he insists. "When people see me, everyone will know that I am Blake and I am gay. That I am here to advance the movement of gay people in sport – and to support gay people in Russia."
"The anti-racism movement has made great strides in recent decades, but the LGBT movement is a long way behind. There is a lot of hate. I want to change that.”
by Sean Ingle
The Guardian
Over 5Million Reads Adam Gonzalez at November 21, 2013 No comments: Links to this post