As Dash looses Territory it Gets strapped for Cash 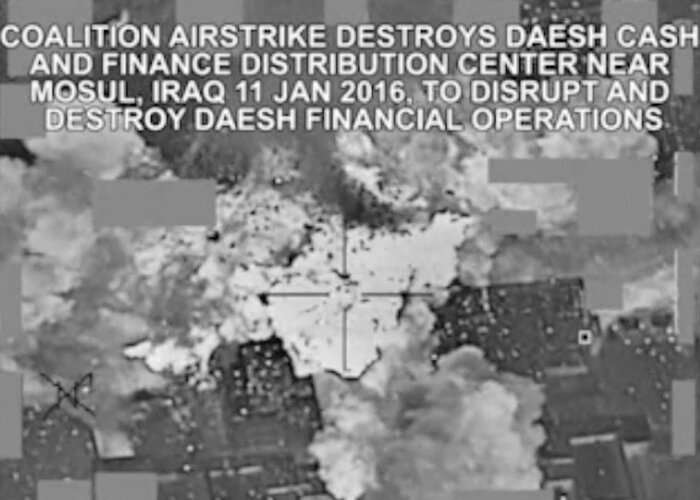 An airstrike targeting an Islamic State group cash and finance distribution center near Mosul, Iraq, as shown in a video released by the U.S. military.
AP
The so-called Islamic State's financial fortunes are bound to the amount of territory it controls.
And the group's dramatic loss of ground in its strongholds in Syria and Iraq is putting pressure on its finances, according to a new report from the International Centre for the Study of Radicalisation.
Though exact figures are murky, the researchers assessed information, including leaked documents, about ISIS finances. They found that the group took in $870 million last year, which is approximately 50 percent less income than in 2014.
That's because its most significant income sources — taxes and fees, oil, and looting — are linked to territory, as ICSR Director Peter Neumann tells All Things Considered.
"In fact what made them so rich in 2014, the fact that they were tied to territory, territory that they could exploit — that also explains why their income has declined so dramatically," he says. Neumann adds that losing control of key cities "means fewer businesses to tax, fewer people to tax, less oil fields to be exploited."
This stands in contrast to financing patterns of most terrorist groups, as the report explains, which tend to be reliant on "foreign donors, charities, or conducting its 'business' of the international banking system."

Iraqi forces, backed by U.S.-led coalition air support and advisers, are currently attempting to wrest Mosul from ISIS control. It's the group's last major population center in Iraq. The operation began in October and is now focused on the western part of the key city.
The apparent decline in the group's finances, the report states, is a product of the coalition's broader military campaign rather than efforts specifically aimed at their finances.
But as Neumann explains, a decline in territory and finances for ISIS "will not have an immediate effect on terrorist operations abroad." Here's why:

"We know that in Europe for example, terrorists have been told to self-finance their attacks, even the Paris attacks, which were fairly complex in November 2015. According to the French government, they cost less than 20,000 euros and that money was raised through petty criminality — people were taking out fake loans, they were selling consumer goods, they were even dealing with drugs.
"So this is quite independent of Syria, of ISIS the central organization as it exists in its core territory in Syria and Iraq. And as ISIS says itself, one of the responses of the declining territory in its core territory will be to increase, or to call for the increase, of terrorist operations abroad. So in the short term, I don't think it will have any effect. If anything, it may actually have a negative effect. It may mean actually more effort to carry out terrorist operations abroad."

At the same time, the extremist group does not appear to be finding new sources of revenue. Neumann says this may mean a shift in strategy: "They are going underground. They are becoming essentially a criminal network again that is involved in smuggling, in extortion, that is involved in common criminality."
The findings corroborate recent reports from the region that suggest financial strain.
"Having built up loyalty among militants with good salaries and honeymoon and baby bonuses," The Associated Press reports, "the group has stopped providing even the smaller perks: free energy drinks and Snickers bars."
The wire service adds that Mosul residents in ISIS-controlled areas are now being punished for dress code breaches with fines, rather than floggings, as they had done previously.
Over 5.6 Million Reads Adam Gonzalez at February 22, 2017 No comments: