Steven Nelson pulled his car up to the Idaho Walmart that night in April expecting to meet a male escort, a man he had contacted via an ad on the website Backpage. Nelson picked up the bearded, tattooed man named Kelly Schneider and, at his request, drove him to Gotts Point, on the shore of Lake Lowell.
Another man met them there. With him, Schneider pushed Nelson to the ground and kicked him at least 30 times with steel-toed boots while Nelson begged for his life, according to court documents. Nelson was choked and stripped of his clothes before they drove away in his car, taking Nelson’s wallet, credit cards and clothing with him.
Barefoot and naked, Nelson knocked on the doors of nearby homes, asking residents to call 911. Hours after being transported to a Boise, Idaho, hospital with broken ribs and a bleeding ear, he died of cardiac arrest.
In a state court Monday, Schneider pleaded guilty to first-degree murder, saying he intended to rob Nelson but not kill him, the Idaho Statesman reported. He admitted to kicking the man repeatedly and acknowledged that his actions caused Nelson’s death.
Afterward, Idaho U.S. attorney Wendy J. Olson announced that Schneider, 23, of Nampa, Idaho, had been indicted on federal hate crime charges by a grand jury for willfully assaulting Nelson because of his sexual orientation. The indictment alleges that Schneider’s actions resulted in the death of his victim. The charge is punishable by up to life in prison, supervised release of not more than five years and a $250,000 fine. He is scheduled to be arraigned Tuesday in U.S. District Court in Boise before Magistrate Ronald Bush. A trial date will be set at the same time.
The fatal beating of the openly gay man has been compared by some in the community to the murder of Matthew Shepard, the gay college student from Wyoming whose torture and subsequent death set off a nationwide debate about hate crimes and homophobia and led to the federal Matthew Shepard and James Byrd, Jr. Hate Crimes Prevention Act. “Folks are grieving the loss of a fellow colleague, as well as facing the reality that our community can be a hostile and sometimes very dangerous place for folks who identify as LGBTQIA,” said Adriane Bang, director of the Gender Equity Center at Boise State University.
Prosecutors dropped Schneider’s charges of felony robbery, theft and robbery conspiracy in exchange for his guilty plea on the murder charge. He faces up to life in prison when sentenced March 20. Prosecutors can recommend a fixed sentence as high as 28 years before parole eligibility, and the defense can ask for as little as 10 years.
Deputy Canyon County Prosecutor Chris Boyd said Schneider had lured and beaten other victims “many, many times before.” He called the beating of Nelson “particularly brutal,” the Idaho Statesman reported.

Mug shot of Kelly Schneider. Courtesy of Canyon County Sheriff’s Office
Jayson Woods, 28, of Nampa, is accused of helping Schneider as he beat and robbed Nelson of his car, wallet and other possessions. Kevin R. Tracy, 21, of Nampa, and Daniel Henkel, 23, of Wilder, are accused of hiding nearby in case Nelson put up a struggle.
Woods’s trial began in District Court on Monday, and Tracy and Henkel are scheduled as witnesses. Tracy is scheduled to go to trial Feb. 6 on first-degree murder, robbery and conspiracy charges. Henkel is set for trial March 6 on the same charges. They have both pleaded not guilty, the Idaho Statesman reported.
Investigators identified and arrested Schneider by comparing his tattoos to a photo in the Backpage ad. They found the others with the help of a woman who called the sheriff’s office to say her SUV had been used to drop Schneider off at the Walmart. According to court documents, the woman said Woods held her inside the SUV, drove her around and forced her to perform sex acts with random men for money.
In the wake of the news last spring, family and friends mourned Nelson’s death, recounting memories of his distinctive baritone voice, his talent for theater lighting and his love for baking croissants. He was in his late 40s when he finished his bachelor’s degree in public relations at the University of Idaho in 2011. He hoped to work as a development director, possibly one day managing fundraising for a political campaign, the Idaho Statesman reported.
Nelson was anything but shy, and gave presentations to university classes about his experiences as an openly gay man, according to University of Idaho Professor Becky Tallent.
“Somebody brought up Matthew Shepard in class one day,” she said. “Steven said something along the line of, ‘I hope to God we’ve gotten past that kind of violence.’”
According to KTVB, Tallent said her friend and former student had previously received homophobic slurs and even a punch, but frequently let cruel comments roll off his back.
“As he put it, people are just sometimes so bigoted that there’s nothing you can do to talk to them,” she said.
Tallent said she was horrified to hear of the brutal way in which her friend died.
“For one human being to do this to another is just beyond the pale, especially as someone as generous as Steven Nelson,” she said.
Samantha Schmidt
washingtonpost.com

Over 5Million Reads Adam Gonzalez at January 24, 2017 No comments: Links to this post 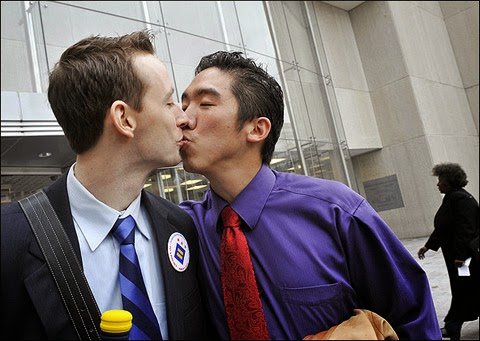 A federal magistrate judge ruled Tuesday that Idaho's ban on same-sex marriage is unconstitutional.
U.S. District Magistrate Judge Candy Dale wrote in the decision that Idaho's laws banning same-sex marriage unconstitutionally deny gay and lesbian citizens their fundamental right to marry.
Dale said marriage works a fundamental change on the lives of all who experience it, and it holds immense personal and spiritual significance.
Idaho's laws wrongly stigmatize gay and lesbian couples and relegate their families to second-class status without sufficient reason, she said.
Gov. C.L. "Butch" Otter already has said he intends to appeal the case.
"In 2006, the people of Idaho exercised their fundamental right, reaffirming that marriage is the union of a man and a woman," Otter said in a statement. "Today's decision, while disappointing, is a small setback in a long-term battle that will end at the U.S. Supreme Court. I am firmly committed to upholding the will of the people and defending our Constitution."
Idaho Attorney General Lawrence Wasden said he would consult with the governor on the state's appeal.
Four Idaho couples filed the lawsuit challenging the marriage ban in November, against the governor and Ada County Clerk Chris Rich. The couples are Sue Latta and Traci Ehlers; Lori and Sharene Watsen; Shelia Robertson and Andrea Altmayer; and Amber Beierle and Rachael Robertson.
Latta and Ehlers married in 2008 in California, and the Watsens married in 2011 in New York. Both couples have children and say Idaho wrongly treats Ehlers as a legal stranger to her grandchildren and requires Lori Watsen to obtain a new power of attorney every six months so she can have legal authority to consent to medical treatment for her son.
Their attorney, Deborah Ferguson, said the ruling recognized that the families are part of Idaho's community and that they deserved the same protections and respect as other Idaho families.
"The court's ruling is a victory not only for the courageous couples who brought this case, but for everyone who cares about freedom and fairness," Ferguson said in a statement.
Over 5Million Reads Adam Gonzalez at May 14, 2014 No comments: Links to this post