Would You Strangulate Your Testicle to Win a Paralympic Medal?

Would you break your own toe to win a Paralympic medal? Would you sit on a sharp object or strangulate your testicles? It's cheating, but a scientist who will be monitoring athletes at the Paralympic Games says a third of competitors with spinal injuries may be harming themselves to boost their performance.


The practice, called "boosting", is designed to increase blood pressure and enhance performance.
It's banned by the International Paralympics Committee (IPC), but some researchers say these are the desperate acts of athletes trying to compete on a level playing field.
"There have been times where I would specifically give my leg or my toe a couple of really good electric shocks" says Brad Zdanivsky, a 36-year-old Canadian quadriplegic climber who has experimented with boosting in the gym.
"That would make my blood pressure jump up and I could do more weights and cycle harder - it is effective."
One British journalist with years of experience covering the Paralympics says he has heard of athletes using small hammers to crack or break a toe.
The point of these activities is to raise the athlete's blood pressure and heart rate.
When able-bodied competitors engage in hard physical activities like running or swimming, blood pressure and heart rate increase automatically. Athletes with spinal injuries do not get that response. "Boosting" is a short cut to higher blood pressure and the improved performance that comes with it.
In medical terms it's defined as the deliberate induction of a dangerous condition common to quadriplegics called autonomic dysreflexia (AD). Many everyday activities that cause discomfort, even something as trivial as sunburn, can set off the condition naturally.
Zdanivsky turned to boosting when his spine was crushed in a car accident in 1994, because he didn't want the injury to curb his passion for mountain climbing.

"I tried several different ways of doing it. You can allow your bladder to fill, basically don't go to the bathroom for a few hours and let that pain from your bladder do it. Some people do that in sports by clipping off a catheter to let the bladder fill - that's the easiest and the most common - and you can quickly get rid of that pain stimulus by letting the urine drain out.
"I took it a notch further by using an electrical stimulus on my leg, my toe and even my testicles.”
But boosting comes at a price.
"You are getting a blood pressure spike that could quite easily blow a vessel behind your eye or cause a stroke in your brain," says Zdanivsky. 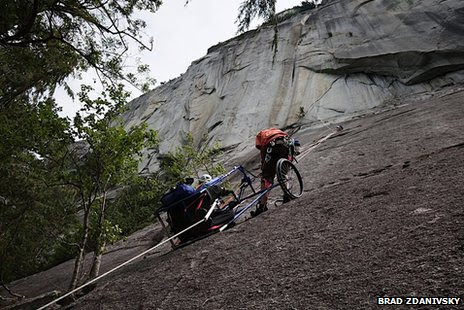 Brad Zdanivsky is a passionate mountain climber
"It can actually stop your heart. It's very unpleasant, but the results are hard to deny. The saying is that winners always want the ball, so it doesn't matter if it's unpleasant, it gets results.”
The IPC has been aware of the problem for many years. Boosting has has been banned since 1994.
But remarkably little scientific research has been done to assess how many athletes are willing to take these extreme measures to improve their performance. A survey carried out by the IPC during the Beijing Paralympics indicated that around 17% of those who responded had used boosting. Some experts believe the real figure could be higher.
Could it be as high as 30%, I asked Dr Andrei Krassioukov, an associate professor at the University of British Columbia and an experienced researcher into spinal injuries?
"Correct. It is possible," he replied.
"I will tell you right now as a physician people want to feel better, first of all - they feel better with their blood pressure higher. But a second thing driving it is the desire to win, to have a fair playing field with other paralympic athletes who have higher blood pressure."
While many athletes with spinal injuries will suffer from low blood pressure, there is considerable variation from one individual to the next.
"There is still a disadvantage between paralympians who have normal blood pressure and those who don't and this puts a significant number of athletes at a disadvantage," Krassioukov says.
"As a physician I totally understand why these Olympians are doing this, but as a scientist I am horrified with these events."
He believes that changes to the system of classification would help - for example by changing the points system that aims to ensure that teams with a roughly equal level of overall disability compete against one another in wheelchair rugby and basketball.
Currently, the system takes no account of blood pressure and heart rate.
IPC Chief Medical Officer Peter Vande Vliet says he has no data that would support or disprove Krassioukov's estimate that up to 30% of paralympians with spinal injuries engage in boosting. It's an unacceptable practice, he says, and the IPC has no sympathy with the idea that it levels the field of play.
The IPC has no plans to add physiological characteristics into their classification systems, he adds.
"Paralympic qualification for athletes with physical impairment is on the basis of a neuro-muscular-skeletal impairment rather than a physiological one," he says.