Same sex Dance as a sport is beginning to be accepted 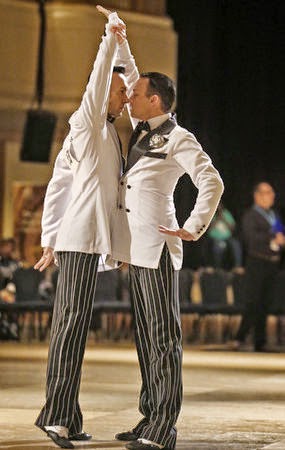 Right there in therulebook for USA DanceSport is the sport's definition for "couple" that Matt Eddy has come to loathe.
A "couple is comprised of one male and one female DanceSport Athlete." The man always leads. The woman always follows.

Which is why Eddy and his partner (both on and off the dance floor), Keith Manning, came to Gay Games 9, where they could dance openly, actually compete for medals, and not think one whit about all the politics of mainstream DanceSport.

"For me to be able to compete like this and not have to worry about the crap you have to worry about on the straight circuit is lovely," said Eddy, who lives in Washington, D.C.
Eddy and Manning participated in Country Western on Thursday at the Renaissance Cleveland Hotel ballroom, and reveled in the opportunity to compete for only the second time together — while also being able to embrace and smooch after they danced without a second look.

This world of sequins, fitted suits and heavy-handed makeup is one of the most popular events at the Gay Games, with fans cramming into every available seat.
They see the waltz and salsa, country western and Latin dancing. They see two women dancing in similar black, sparkly dresses. Or two men in pinstripe pants and white coats. Or one woman in a flowery dress, and her female partner wearing trousers and slicked-back hair that gives her a more masculine physique.
Or, in the case of Emily Coles, a San Francisco resident who competed in American-style Smooth, a dress and trousers.

"She's not interested in wearing heels at all," said Coles' dance partner, Kieren Jameson. "(And) the one thing about leading is it's harder to lead in a heel than it is in a flat shoe. It’s just harder to lead in heels because you've got not enough room to kind of push off of on the heels."

Typically, the pants -- or the cowboy hat in Country Western -- indicate who will be the leader while dancing. But in the world of same-sex DanceSport, it's not even necessary. Many pairs switch who leads throughout their routines.

"That's one of the things we can do in these competitions that you can't do in any other," Jameson said. "In the mainstream world, it's written into the rules that the man leads and the woman follows, and that's it. That's why we can't compete at mainstream comps, because they forbid it. Which I think is ridiculous."
This competition also is free from much of the cutthroat environment.
"It's so friendly and everyone has a good time," Jameson said.
Both Eddy and Manning have participated in mainstream competitions, but have been unable to dance with each other until the social dancing portion of the events in the evening.
And even then, they cringe.

"It's terrifying at times," Eddy said, citing conservative Southern cities as most intimidating. "There are places where when you go on the dance floor and you're dancing with another man, you're not sure what the reaction is going to be. There's always that moment right before you start dancing where you're like, 'All right. Does anybody have any bottles that they're going to throw?' But we've never had anything like that.
"Right before there's always this thought: Something could go wrong here, because it's very conservative. You feel that."
But not at Gay Games 9, where any kind of partnership – on or off the dance floor — is accepted.

By Jodie Valade, The Plain Dealer
Over 5.6 Million Reads Adam Gonzalez at August 15, 2014 No comments: Links to this post