Democratic presidential candidate Joe Biden made a comment about gay waiters at a fundraiser event in Seattle over the weekend that not only fell completely flat, but caused pushback from the wealthy donors in the crowd.

In trying to demonstrate how far public opinion in the U.S. has evolved on the treatment of the gay community, the former vice president claimed that just five years ago it would have been socially acceptable for a businessman to “make fun of a gay waiter."

“Not in Seattle,” some in the crowd shouted back.

Biden said if that happened today the person would not be welcome back.

“The American people are so far ahead of their leaders on this issue,” he said.

Some pointed out that the city had a gay mayor five years ago.

Email ThisBlogThis!Share to TwitterShare to FacebookShare to Pinterest
Labels: Biden 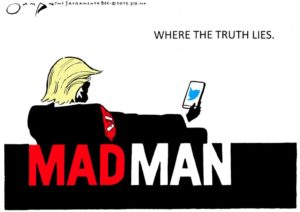 By ABBY VESOULIS, Time
During his 2016 presidential campaign, Donald Trump pledged to be an LGBT-friendly president, featured an openly gay speaker on stage at the Republican convention and tweeted that he would be better on gay rights issues than Hillary Clinton.
But when the nation’s leading LGBT civil rights group met Saturday night for an annual dinner, a running theme for the night was that they could not imagine a president more hostile to their concerns.
Speaker after speaker referred to Trump as a “bully and a bigot,” referencing his Administration’s policies on transgender individuals serving in the military, decreasing funding for HIV/AIDS prevention and removing a line about sexual orientation and gender identity from the 2020 Census.
“I don’t have to tell any of you that we are living through truly frightening times. Day after day, we’ve seen our most fundamental rights under attack by the highest levels of government, and the headlines couldn’t be any worse,” said President Chad Griffin.
The event came with just over 50 days to the midterm elections, the first Trump has faced as President.
President Obama’s Attorney General Eric Holder, “Crazy Rich Asians” star Awkwafina, Academy Award-winning actress Anne Hathaway and Olympic figure skating medalist Adam Rippon all held the microphone at some point in the night, but the speaker who was received most warmly was former Vice President Joe Biden, who became the highest-ranking official at that point to endorse same-sex marriage in an interview in 2012, which he referenced in his speech.
“I would not affirmatively make the case, but if I was asked, I would not remain silent,” he said of his decision to speak up before Obama did on the issue.
Biden, who is on most lists of potential presidential contenders in 2020, compared the cancer that led to the death of his son, Beau Biden, to the “disease of homophobia.”
“We can end it,” he said.
His wife, Jill, introduced him, telling the story of a bully who threw worms at her 9-year-old sister when they were growing up. “He was a serial offender, and I was tired of it,” she said. “So I punched him right in the face.”
“I hate bullies,” she said, vehemently.
Joe spoke of what he called a bully too. But he wasn’t referring to one from his childhood.
Instead of using the full might of the executive branch for security, dignity and safety for all, “the President uses the White House as a literal bully pulpit,” he said.
As he spoke, audience members were chanting, “Run Joe Run!”
Democratic Sens. Cory Booker and Kamala Harris, who are also on a short list of expected 2020 candidates, made appearances too.
Over 5.6 Million Reads Adam Gonzalez at September 17, 2018 No comments: Links to this post