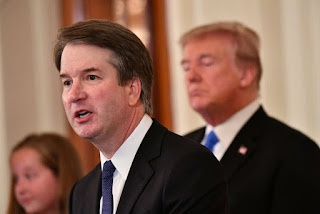 A growing number of Americans said they opposed President Donald Trump’s Supreme Court nominee, Brett Kavanaugh, as the candidate’s confirmation hearings took place and as he fended off a sexual assault claim, a Reuters/Ipsos poll showed.

The Sept. 11-17 poll found that 36 percent of adults surveyed did not want Kavanaugh in the Supreme Court, up 6 points from a similar poll conducted a month earlier.
Only 31 percent of U.S. adults polled said they were in favor of Kavanaugh’s appointment.
If support for his nomination remains this weak, Trump’s pick would rank among the lowest-supported Supreme Court nominees to later be confirmed, according to historical data from Gallup.
“Not after the sexual charges,” said Jeffrey Schmidt, 56, from Colorado, who opposes President Trump and his policies. “Before the allegations, I was not sure.”
Kavanaugh has denied the claim that he assaulted a woman while in high school in 1982, calling it “completely false.”
Support for Kavanaugh was higher among Republicans, but fewer than two out of three, or 64 percent, said they were in favor of his nomination.
Thirty-five-year-old Karis Reeves, a Republican-leaning professional from Arizona, said he supported Kavanaugh’s nomination, but added he wasn’t “informed enough” and that the timing of the sexual misconduct allegation was “conspicuous.”
More women — 33 percent — opposed Kavanaugh’s nomination in the latest Reuters/Ipsos poll, up seven percentage points from a month earlier.
“It was already a ‘no’ but now it’s a stronger ‘no,’” said Bonnie Mann, 29, when asked about whether her view of Kavanaugh’s nomination had changed since the allegation.
Christine Blasey Ford, a university professor in California whose sexual assault allegations have roiled a confirmation process that once seemed smooth for Kavanaugh, wants her claim to be investigated by the FBI before she appears at a Senate hearing, her lawyers said on Tuesday.
Trump has stepped up his defense of Kavanaugh and expressed sympathy toward his nominee, saying on Wednesday that it was hard for him “to imagine anything happened.”
The Reuters/Ipsos poll surveyed 2,196 adults online across the United States and has a credibility interval, a measure of precision, of 2 percentage points.
Over 5.6 Million Reads Adam Gonzalez at September 20, 2018 No comments: