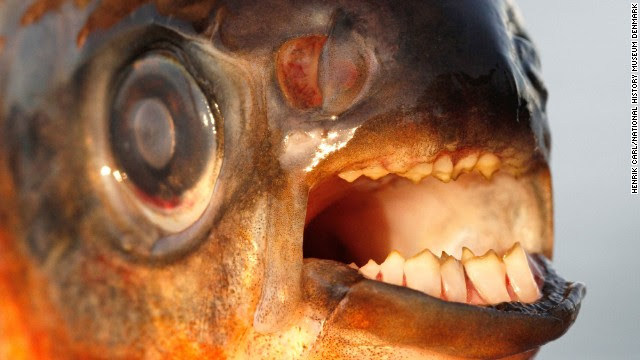 It is safe to go back into the water again -- at least in Scandinavia.

A warning over the weekend for male swimmers off the coast of Denmark and Sweden to protect their private parts because of a testicle-munching fish appears to have been a joke that got out of hand.
After a Danish fisherman caught a South American pacu among his eels and perch this month, a professor at the Copenhagen Museum of Natural History told men to be careful because the fish sometimes mistake male reproductive organs for tree nuts, one of their favorite foods.

"Anyone choosing to bathe in the Oresund these days had best keep their swimsuits well tied," Professor Peter Rask Moller said in a Saturday news release about the fish discovery in the strait separating Denmark and Sweden.
Wednesday, however, Moller said he was just joking and never meant for his warning to get so much publicity.

"We did say that we recommend men to keep their swimsuits tied up until we know if there are more pacus out there in our waters," Moller told CNN by e-mail. "Of course, this is half a joke since it is very unlikely that you would actually meet one here and that it would bite you. It's up to people themselves how careful they want to be. I'll keep my shorts on, though."
Finding a pacu, a close relative of the piranha normally found in South America, is unusual so far north. Moller said it was likely dumped in the strait by an amateur aquarium owner or fish farmer.
William Fink, a piranha researcher at the University of Michigan who is also curator of fishes at the school's Museum of Zoology, poured water on the pacu warning. For one thing, he said, pacus are vegetarian -- and there's no record of them attacking a human.
"They're fruit eaters. Those big crushing teeth they have is for crushing seeds," he said.
Pacus tend to swim under fruiting trees during high water, waiting for the trees to drop their fruit, seeds and nuts, Fink said. The fish then swim to the surface to eat the tasty morsels.
In fact, Fink said, that's how fishermen catch them: by putting a piece of fruit on the end of a line and letting it float in the water. Pacus swim up to grab it and then get caught.
"The nuts that they're eating, the fruits that they're eating, are splashing down from above, and humans don't act like that when they're swimming," Fisk said.
And unlike piranhas, which have rigid, razor-sharp interlocking teeth, pacus have teeth that resemble human molars and fit together in a similar bite, Fisk said. The pacus use those teeth to crush their food, not to rip it apart -- or off.

He speculated that the pacu found in Denmark was probably released shortly before it was found because pacu species can't survive in either saltwater or chilly temperatures.
"It's just too cold for pacus to be living there. They certainly wouldn't make it through the winter," or even past October, he said.

CNN was among numerous news outlets around the world that reported the Danish news release over the weekend, focusing on the special warning for male swimmers.
Moller said he only meant to publicize the surprise discovery of a pacu in the Baltic and to advise the public that the fish can be invasive and possibly dangerous.

"The story about the 'nuts' was never meant to be the headline. But it certainly got people's attention," Moller told CNN. "I'm sorry if it has caused you any trouble. It was a bit of a joke, but I still will keep my swimsuits tied up, and I will never swim in an aquarium with these fishes."
CNN's Bharati Naik contributed to this report.
By Melissa Gray, CNN
Over 5Million Reads Adam Gonzalez at August 16, 2013 No comments: Links to this post