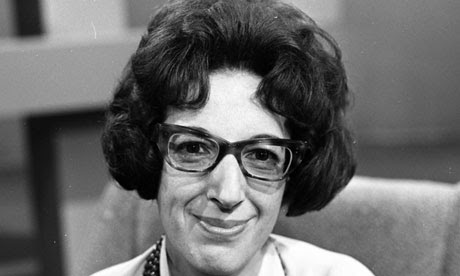 Marjorie Proops, agony aunt for the Daily Mirror in 1963, praised the Quaker book. Photograph: ITV/Rex Features
1963 book Towards a Quaker View of Sex said homosexual affection could not be morally worse than that of heterosexuals

It is a statement that would raise few mainstream eyebrows now. But this was 50 years ago: "An act which expresses true affection between two individuals and gives pleasure to them both, does not seem to us to be sinful by reason alone of the fact that it is homosexual."
The text comes from Towards a Quaker View of Sex, a pioneering and, at the time, hugely controversial book from the religious society, which provided perhaps the very first faith-based affirmation of gay equality and went on to be hugely influential, selling 500,000 copies.
While focusing most closely on homosexuality, which was then still three years away from being decriminalised, the publication also took decidedly liberal attitudes towards premarital sex and adultery, prompting praise from agony aunt Marjorie Proops in the Daily Mirror but predictable shock in the News of the World.
To mark the anniversary, the Quakers, officially known as the Religious Society of Friends, held a meeting in a hall in London on Friday to hear the sole surviving member of the group that produced the publication explain how it came about.
Keith Wedmore, now 81 and a retired barrister based in California, was among a group of 11 Quaker authors, also taking in psychiatrists, psychologists and teachers, gathered together by the Cambridge zoologist, Anna Bidder, in 1957 to consider issues surrounding homosexuality. Wedmore, then aged just 25, was himself bisexual and deeply aware of the pressures facing gay people after having discovered, several years earlier, the body of a fellow undergraduate who had gassed himself.
Wedmore told the Guardian the group spent seven years meeting once every two months in the comfortable surroundings of the University Women's Club in central London: "JK Rowling would have loved it. We would go into the library, and if you go to the right bookcase and touch it, it opens up and there's a room behind. You shut it again and no one would know you were there. So we could say anything we liked. We'd come out for this gorgeous lunch and then go back in again. We took the food and water out of Quaker expenses but we paid for our own wine.
"We examined each issue completely freely, and you don't often get a chance to do that."
The initial remit of homosexuality soon widened, he said: "We realised we couldn't do that in isolation. They, we, aren't some kind of strange breed where the rules apply to them alone. So we started thinking: what is a relationship, what is bad and what is good, and came to this famous conclusion."
The conclusion was virtually unprecedented for the era, and still significantly more definitive than most religious organisations can manage half a century later. The book argued: "Surely it is the nature and quality of a relationship that matters: one must not judge it by its outward appearance but by its inner worth. Homosexual affection can be as selfless as heterosexual affection, and therefore we cannot see that it is in some way morally worse."
The reaction on publication, understandably, was very mixed, not least from other Quakers – the group was affiliated but by no means an official body.
Wedmore said: "It was the Friends Temperance and Moral Union who started it all off. They were no doubt expecting an extremely severe reprimand for any hanky panky. The chairman of it asked for a copy a week before publication, by which time it was already in print. There was a tremendous silence. At a meeting later his wife called it 'poison'."
With time, however, the book's influence grew, and it arguably shaped decades of forward-thinking sexual policies for the Quakers, who formally adopted gay marriage as an aim in 2009.
"It was the greatest achievement of my life," Wedmore said. "I'm afraid I shan't have anything else like that. I've had a lot of people come and say it changed their life. Especially in San Francisco. It's very gratifying. I've had nobody come up to me and say: 'I read it, so I went out and screwed somebody and it ruined my life'> That's never happened.”
Over 5.6 Million Reads Adam Gonzalez at September 14, 2013 No comments: Links to this post