"Big Chicken" A Medical Mystery Traced Back to Slaughterhouse Workers 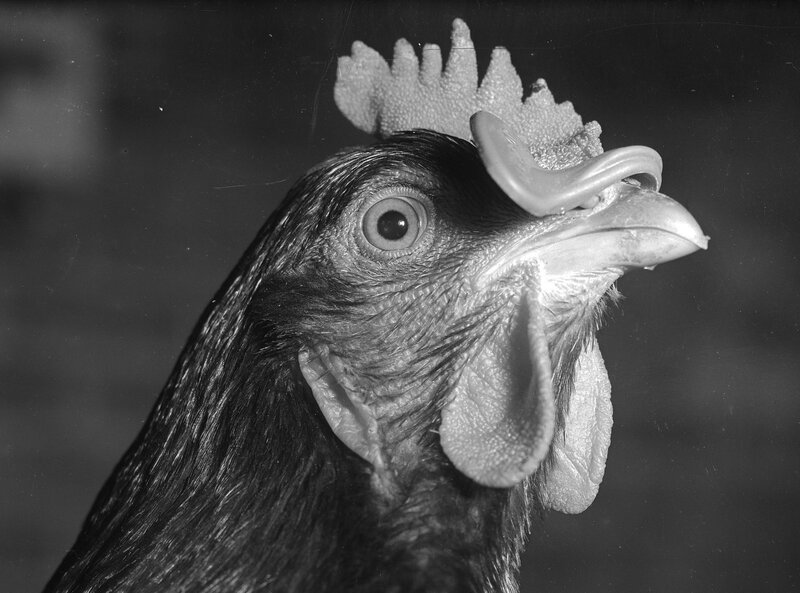 In the 1950s, the poultry industry began dunking birds in antibiotic baths. It was supposed to keep meat fresher and healthier. That's not what happened, as Maryn McKenna recounts in her
new book.
Express/Getty Images
Editor's note: In the 1950s, the U.S. poultry industry began adopting a new process: Acronization. Ads that ran in women's magazines pictured crisp-skinned whole chicken that tasted "fresh," "wholesome" and "country sweet" thanks to a "revolutionary process which helps maintain freshness in perishables" like chicken. In reality, Acronization referred to the use of antibiotics. Birds were doused in a diluted solution of antibiotics while they were being butchered. The goal was to keep the meat from spoiling, allowing birds to be sold not just days but weeks after slaughter.

[MARYN MCKENNA, NPR.org]
But as Acronization became widespread, so too did its misuse. Slaughterhouse workers didn't always get training on how to use the antibiotics properly, and even those that did sometimes used way more of the drugs in their solutions than the manufacturers called for. That meant some birds might be getting far more antibiotics than could be denatured by the heat of cooking.
As Maryn McKenna writes in her new book, Big Chicken: The Incredible Story of How Antibiotics Created Modern Agriculture and Changed the Way the World Eats, which examines the use of antibiotics in modern agriculture, "it was possible that housewives were unwittingly feeding their families tetracycline-laced fish and chicken. And doctors would soon discover that the people responsible for getting those proteins to dinner tables were being exposed to antibiotics in a manner that no one had accounted for."
Below is an excerpt from Chapter 4 of the book.
Reimert Ravenholt, a physician at the Seattle Department of Public Health, was puzzled. It was the winter of 1956, and for weeks now, local doctors had been calling him, describing blue-collar men coming into their offices with hot, red rashes and swollen boils running up their arms. The men were feverish and in so much pain they had to stay home from work, sometimes for weeks.

The puzzle was not what was afflicting them. That was easy to establish: It was Staphylococcus aureus, or staph, a common cause of skin infections. Ravenholt happened to have a lot of experience with staph. He was the health department's chief of communicable diseases, the person who recognized and tracked down outbreaks, and for the entire previous year, he had been dealing with a staph epidemic in Seattle's hospitals. The organism had infected 1,300 women immediately after they gave birth, and more than 4,000 newborn babies, killing 24 mothers and children. It was a dreadful episode.
The thing that was keeping Ravenholt up at night now was not the cause of this apparent new outbreak: It was the victims. Medicine already knew that staph could spread rapidly through a hospital, carried unknowingly by health care workers as they went from patient to patient. But outside of hospitals, it was equally taken for granted that staph infections occurred individually and by happenstance. Unless there was an explicit health care connection — a shared nurse or doctor, a crib in a nursery shared by many other newborns — there was no reason to suppose two staph cases were linked. The men coming down with the bug, several a month for five months in a row, were not linked to any hospital or doctor, yet they all had the same pattern of lesions in the same places on their arms and hands.

Widespread use of antibiotic feed supplements may induce the establishment of strains of organisms resistant to their action. The least harmful result would be the loss of efficiency of antibiotics as growth promoters. A more disastrous consequence might be the development of resistance in pathogens against which antibiotics are at present the only means of defense.

Coates was prescient. Just a few years later, a little more than a hundred miles away, a tragic outbreak would demonstrate that she was right to be afraid.
Excerpted from Big Chicken by Maryn McKenna; published by National Geographic Partners on Sept. 12.
Over 5Million Reads Adam Gonzalez at September 11, 2017 No comments: Links to this post