Abortion is punishable with a prison sentence in Argentina.

I just got this information on adamfoxie's mail box just now(tuesday late afternoon).The women in the United States have been close to getting (AGAIN) that kind of law sinced the Republicans suppored by the religious right have proposed for years now to have the law we have now allowing abortions to be overturned.  But also a chance these women will do what the Women in Argentina are doing and more!

As Trump filled the Supreme court with men that don't think as he does necessarily because he does not do much of that. But a High School jr. could proof that if they follow politics He follows not this conciense but a list of other factors. We could talk about that but I want to concentrate on the women right to control their bodies. And the necesity to have a a child born where he is wanted and can be supported instead of being born to be hungry with no laws of right and wrong and then the same people who wanted him born want to burn him in the electric chair. We in the U.S. Just burnt one a few days ago.

But Trump goes by the poeple that suppport him with money and help him keep power...because he just loves the power!

Trump gets it right when someone gets in the oval offfice with an argument and money for his re-election and something that sounds good and religously accepted as decent, something god will be proud off.
Like is better to jail a mom who could not afford to have a pregnancy do to money or how the embryo was conceived.

These women are united just like in the United States the same type of women and many men are and that is why these heartless laws non sencical and which hurt and does not help because why give live to an embryo who is not wanted at that time. As humans are born they need not just the placenta to keep growing while in the woumb. They will need a lot more once they are  formed and who can argue with that?
Adam Gonzalez
adamfoxie blog

Down below~ Those are not anything but people which the camera could not catch everyone
on the shot
because of the quantity of humanity, most of them women 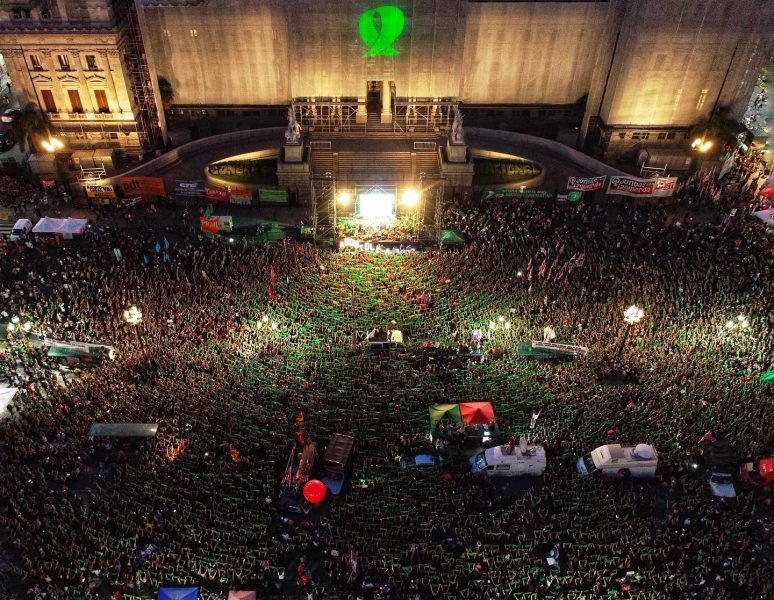 Aerial view of # 19F crowds in front of the Argentine Congress. Public photo from Dronera.
Abortion is punishable with a prison sentence in Argentina.  Romina wrote:

The below story was published in Global Voices

Thousands protested in front of the Argentine National Congress in the capital Buenos Aires on February 19, 2020, in support of the legalization of abortion.
Abortion is illegal in Argentina, and punishable with a prison sentence, except when the pregnancy is the result of rape or when it poses a risk to the woman's life.
The march was organized by the National Campaign for the Right to Legal, Safe, and Free Abortion and focused on the approval of a bill, proposed in parliament for the ninth time, that would allow the voluntary interruption of pregnancy and put an end to obstruction of access to abortions that are already legal.
The bill nearly passed in 2018 — it was approved by the Chamber of Deputies but rejected in the Senate by 7 votes from conservative senators spanning different political parties. The topic of abortion in Argentina transcends the lines of traditional party politics.
The bill was proposed again in 2019, but politicians refused to consider it at that time because it was an election year and many candidates preferred to avoid controversial issues.
In 2020, women’s rights advocates took to the streets and parliament once more with fresh hopes and the slogan “the bill is on the streets”: 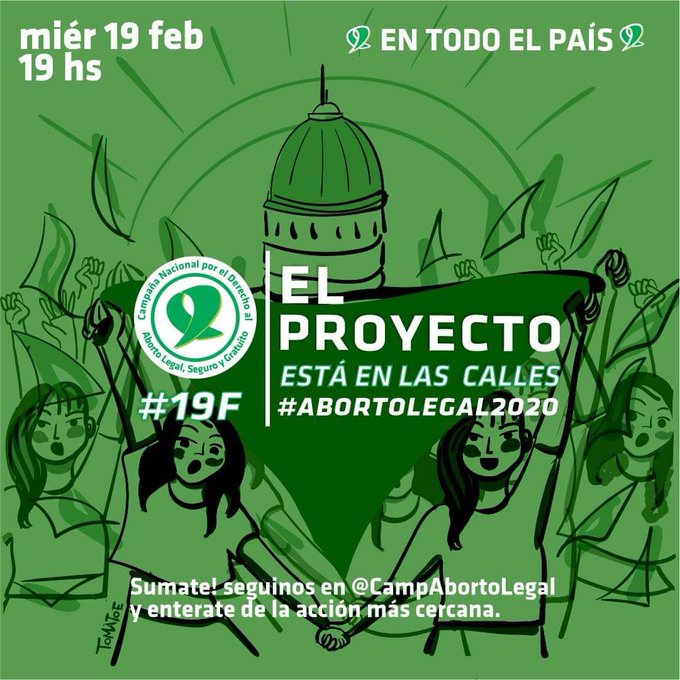 
117 people are talking about this

At the act, which was referred to online as “#19F”, there were additional demands for legal action to also address gender inequality and violence, femicides, homophobia, transphobia, and the Comprehensive Sex Education (ESI) program, which is compulsory in every school in Argentina but has encountered several obstacles to its practical application due to opposition from conservative and religious fundamentalist movements.
On a stage set in front of the Plaza del Congreso in Buenos Aires, speakers commented on the campaign. Also present were three members of the Chilean collective Las Tesis, who performed an adaptation of the well-known anthem “A Rapist in Your Path,” alluding to clandestine abortion and young girls who are forced to become mothers:

Throughout the week, the #19F, #Pañuelazo, and #AbortoLegal2020 (in English, #LegalAbortion2020) tags took social media by storm: 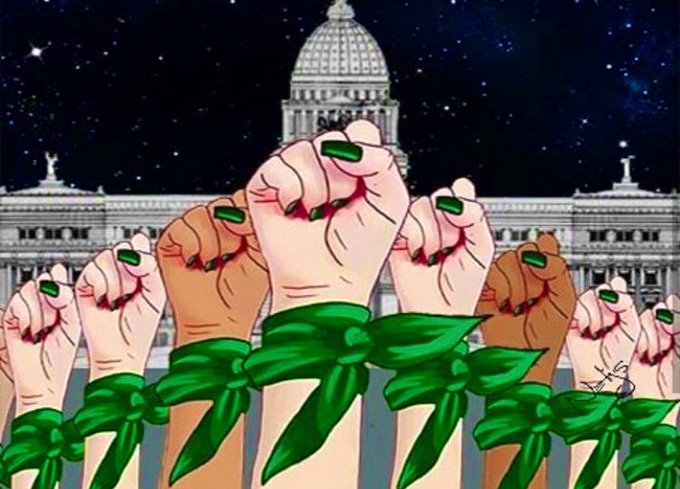 Because they are our bodies.Because it is our right.Because it is legal or clandestine.Because sooner rather than later: it will be law 💚 #LegalAbortion2020 #19F 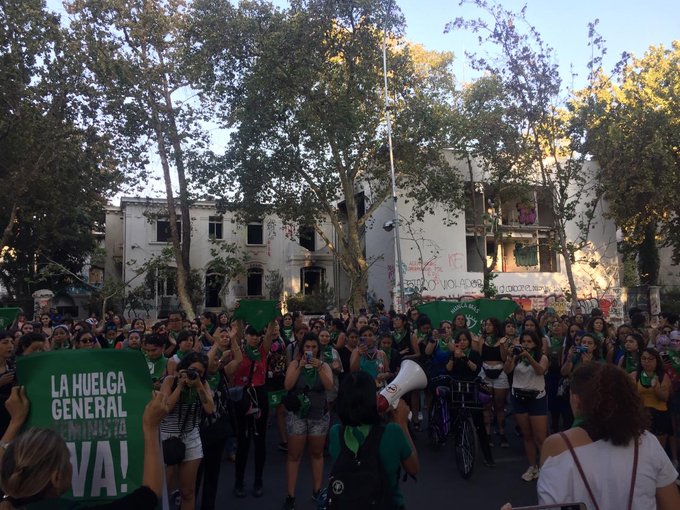 
34 people are talking about this 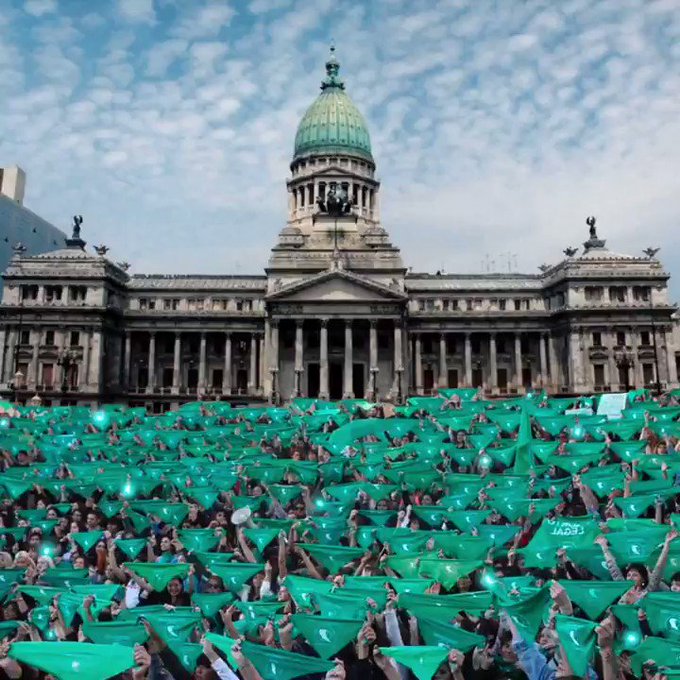 
183 people are talking about this


322 people are talking about this

We do not want to read news like this anymore. We do not want any woman to have to die in the terror of secrecy. Let's not remain indifferent. The right to #LegalSafeAndFreeAbortion is a matter of public health.
Sooner than later, #ItWillBeLaw 💚 LegalAbortion2020

The symbolic green #19F handkerchief (pañuelazo, in Spanish) was used in demonstrations of support in Argentina and beyond in several cities around the world:
Over 5.6 Million Reads Adam Gonzalez at March 11, 2020 No comments: Links to this post