Men's Health.
Over 5Million Reads Adam Gonzalez at April 07, 2019 No comments: Links to this post 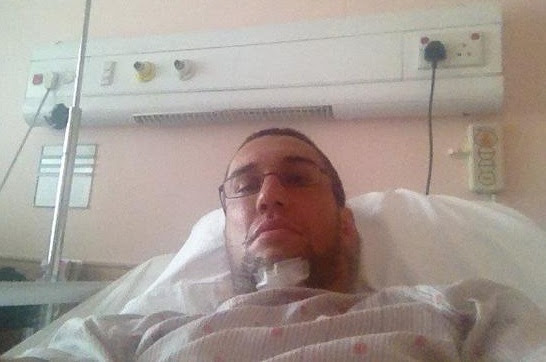 MMA is a pretty dangerous combat sport that can lead to some serious injuries. Who would figure that the most gruesome injury one fighter suffered actually happened out of the cage?
Ray Elbe, who competed on Season 9 of “The Ultimate Fighter,” announced on Saturday that he sustained one of the most horrifying injuries we can think of: a broken penis. No, the injury did not occur while he was fighting; it actually happened while he was having sex.
Elbe explained in a video posted on his website over the weekend that the injury occurred while he was having sex with his girlfriend in Malaysia on Dec. 3. He says his penis broke (ed note: there is no bone to break) when his girlfriend landed hard on him. Blood began spraying everywhere.
“I ended up fracturing my penis bone … I tore the urinary tract, tore some membrane — as it happened you can imagine the shock and the horror that was going on,” Elbe said in the video. “I jumped up from the intimate moment, blood shooting out of my groin. I immediately tried to run to the shower, felt myself losing consciousness, tried to walk back to the bed at which point I collapsed, knocking myself out. I gave myself 10 stitches and fractured a couple teeth.”
Elbe says he tried treating himself after coming to, and that his girlfriend was frantic. She called emergency while he was laying naked on the floor in a pool of blood.
Elbe says he spent 13 days — including his birthday — in the hospital, and that he’s still using a catheter to urinate. He says he’s going back for a checkup on Dec. 19 where the catheter should be removed.
Elbe was obviously embarrassed about the injury, but he says he went public about it to raise awareness for it.
“This is probably the worst nightmare you can think of,” he said. “The biggest problem people suffering from this medical emergency encounter…is not immediately seeking medical attention.
“I hope my story helps someone with a similar injury in some way…as this experience is truly something you would never wish on anyone..lol,” Elbe wrote on his blog.
Over Twitter, Elbe described the experience as coming “as close to death as you can come without dying.”
Doctors expect him to make a full recovery.
We’ve seen other athletes get hurt during sex, but this is the first time I’ve ever heard of someone breaking their penis. I honestly didn’t even know that was possible, so I really do thank Elbe for sharing his story to help educate the public.
And here I was thinking sex was supposed to be an enjoyable experience …
Elbe has racked up thousands of dollars in medical expenses as a result of the accident. If you feel badly for him, or at least got a nice laugh out of his painful story, maybe you could see fit to donate a few bucks to him to help him pay for the medical bills. You can donate to him through paypal by sending money to the following email address, which is Ray’s email:magicalray@aol.com
Note: A photo previously posted here misidentified a woman as Elbe’s girlfriend.
Photo credit: Ray Elbe/Twitter

Over 5Million Reads Adam Gonzalez at December 18, 2012 No comments:

Don't Be the Worst: How to Be a Good Ex-Boyfriend


So you broke up. Big deal. Stop whining about it in public. And follow these simple rules for handling your ex
BY JULIEANNE SMOLINSKI GQ Mag

Over 5Million Reads Adam Gonzalez at February 29, 2012 No comments: Links to this post

adamfoxie*blog International: He Once Had The Most Ripped Body } Changed Mind He...

adamfoxie*blog International: He Once Had The Most Ripped Body } Changed Mind He...: By IONA KIRBY He once had a ripped body that could rival bodybuilders. But Aaron Carter clearly decided that all the hard work t...

Over 5Million Reads Adam Gonzalez at January 21, 2012 No comments:

Like it or loathe it, some men wear make-up.
Sometimes it is for fun, sometimes
it’s almost necessary – whether it’s covering up unsightly bags
before or after a night out, or, in a more
serious scenario, covering up scars to give you confidence.
Following the years of metrosexuality there is an apparent trend where
men are returning to be ‘real men’. However, this trend is contradicted by the rise in
sales and wealth of make-up products on the market, from concealers to bronzing
powders. So So Gay has taken a look at some of the best products to help those that
will help you look like a natural male beauty rather than a tangerine queent
First up is Yves Saint Laurent’s Touche Eclat pour Homme from their
L’Homme range (Selfridges – £24.50), a light concealer for the eyes which not only
covers unsightly bags but also illuminates, providing amazing coverage without
being greasy. A must for the overworked or those who enjoy a good party and
don’t want to wear the signs on their face. It has been a staple in women’s daily
routines for many years and now thankfully they have repackaged it for men, not
that it ever stopped any guys desperate for cover up whipping out the gold wand
in a time of need.
If you require more of an all over cover up solution then Jean Paul Gaultier’s
Monsieur Range bronzing powder is a must (Boots - £30.65). Giving naturally
bronzed all over coverage, the light powder contains reflective pigments that
help even out the complexion leaving a smooth, even finish. Be sure to cover
your neck and decolletage that is on show, otherwise you’ll run the risk of a
make-up ‘tide line’ if you aren’t naturally tanned elsewhere.
For something offering a bit more cover then try the Keromaskrange.
developed for use by the Red Cross to cover up war
wounds and skin disorders in poverty stricken countries.
Unfortunately, from time to time accidents happen and
although many people might choose to wear their scars
with pride, for some confidence can be knocked and they
might feel they need a solution to cover the marks.
This range includes a some great products, one of which
is a plain uncoloured powder which covers rosacea extremely well.
Whatever your requirements there is a product for you. If you want to cover up
blemishes or even out your skin tone then there are plenty of products out there
to give you the result you require. Male skin is different in many ways from female
skin, so try to invest in something designed specifically for your skin type –
otherwise you may end up with your make-up running down your face at the
worst possible moment.
by Stuart henshall  http://sosogay.org
Over 5Million Reads Adam Gonzalez at August 01, 2011 No comments: Links to this post

'Psychiatrist studies men closeted until middle age': Then He Comes Out