The fridge in Hector Fernandez's home is under lock and key.
The door to the kitchen, which is specially fitted, is also locked.
So are the cupboards and the medicine cabinet. Anywhere that contains anything remotely edible is guarded and the keys hidden under Hector's pillow at night.
It's not that Hector is paranoid about thieves. It's because his son has the incurable genetic condition Prader-Willi syndrome.
Patients with the syndrome - named after the two researchers who discovered it in 1956 - suffer from an unrelenting, insatiable hunger.

Hector says that if unsupervised, his 18-year-old son, Christian, could, in effect, eat himself to death.
"The stories I could tell," reflects Hector.
"Eating dog food from the bowl, going through the rubbish, emptying an entire tube of toothpaste into his mouth.
"For him, it's all food…" he trails off as Christian interrupts to say he's hungry. Hector gives him a single slice of pineapple, pre-cut to ensure he has no more than his required sugar intake for the morning.

Prader-Willi, which comes from deletion or repetition in Chromosome 15, has a devastating effect on patients and their families.
As well as often suffering from obesity and diabetes which shortens their life expectancy, children with the condition have mental development issues and behavioral problems.
Rare illness
Christian is a good-natured man but can fly into violent rages if denied access to the food he wants.
"It's like a category five hurricane, flattening anything in its path," his father says, showing me a disturbing video of a recent violent episode.
His parents even resorted to tying Christian to a padded chair to prevent him from self-harming or hurting his care-givers.
"I just take things one day at a time," says Hector, unable to hold back the tears. "I don't know what will happen to him after I'm gone," a common concern for the parents of Prader-Willi children.
Dealing with the complications of the disease are especially tough in Cuba.
Hector tries to feed his son a macrobiotic diet to keep his weight and blood sugar in check. However, it's hard to find the right food and medicines on an island crippled by a decades-long US economic embargo and years of economic mismanagement by the state.
Although the Cuban government lauds its healthcare system, it is suffering from a chronic lack of investment and Hector says doctors in Cuba have next to no experience with treating Prader-Willi.
"Being a rare illness, there are very few doctors in the country who have ever seen any patients with it," he explains. "They might have seen one case in 20 years and then never have seen another. There is no specialist here."
He says patients should be seen by a range of specialists with an understanding of Prader-Willi, from nutritionists and dietitians to psychiatrists and physiotherapists.
Still, things are beginning to change.

Last month, Cuba hosted the tenth international Prader-Willi conference. The forum brought together researchers, clinicians, patients and their families under one roof to share their experiences.
It is an invaluable opportunity, says the president of the International Prader-Willi Organisation, Prof Tony Holland: "The most important aspect is to get families, scientists and care-givers - some from countries that have very good services, some that have very poor services or no services - to learn from each other."
The intention is that people can then "argue for better services, can argue for the right treatments for their children" when they go home, he says.
As emeritus professor of psychiatry at Cambridge University, Prof Holland has had years of involvement with Prader-Willi syndrome and has seen the state of care of the condition in many parts of the world. Despite the huge advances still needed in Cuba, he believes there are some encouraging signs:
"Cuba now has the ability in its health service to do the genetic diagnosis. Their doctors are beginning to recognize Prader-Willi syndrome, there is a community of families of people with Prader-Willi syndrome, and that is really important."
That coincides with Hector's experience. In 2010, affected parents held their first national meeting. Only six turned up. Today, there are more than 100 Cuban families identified with the disease and, thanks to improvements in internet access in Cuba, they are in constant touch.
Hector serves up a plate of raw vegetables and a wholewheat rice cake for Christian's lunch. Even finding rice cakes is a struggle in Cuba. But Hector is now familiar at dealing with the needs of a Prader-Willi sufferer on a Communist-run island. He's even started to teach other people in his neighborhood about the disease.
He explains to them that Christian is not just a little chubby and mentally undeveloped - but at mortal risk, every day.
"There's a tendency here to reward kids for being good with candies," he observes. "But people don't realize that one sweet here, another one there - that could kill him."
Over 5Million Reads Adam Gonzalez at December 27, 2019 No comments: Links to this post 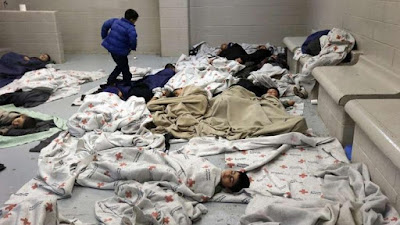 This spring, the White House implemented a new “zero-tolerance policy” intended to crack down undocumented immigrants attempting to enter the US along the country’s southwest border. Among the central targets of this policy are the children of immigrants, some as young as 18 months old.
US attorney general Jeff Sessions announced on May 7 that the Department of Homeland Security would be referring 100% of immigrants illegally crossing the border for criminal prosecution in federal court—and that any minors traveling with them would be taken into government custody. In a speech explaining the new guidelines, Sessions said, “If you’re smuggling a child, then we’re going to prosecute you, and that child will be separated from you, probably, as required by law.”
This is a major shift in policy, as immigrants previously charged with illegal entry—a misdemeanor on the first offense—had been allowed to stay in family shelters with their kids while awaiting asylum cases or deportation proceedings. Now, migrants attempting to enter the US illegally are being jailed and separated from their children.
It’s clear the separations are already having a devastating effect. One Houston Chronicle story tells the story of a man who was deported—alone—after attempting to cross the border, while his 18-month-old was placed in a federal shelter. Government agents couldn’t tell him where his child was. A story in the Arizona Daily Star reports on a Guatemalan woman begging the judge who sentenced her to serve time for illegal entry to tell her when she would be able to see her 8-year-old and 11-year-old sons again—and getting no clear response.
Heartbreaking as these stories are, the long-term consequences of the separation may be even worse. A strong body of science proves that separating children from their parents causes enduring harm to children’s emotional and mental health, and to the relationship between the child and their parent.

Attachment theory, developed in 1958 by John Bowlby and Mary Ainsworth, explains that young children’s sense of security is rooted in their relationships with caregivers, which in turn shapes children’s social, cognitive, and emotional regulation skills. That means separating a child from the caregiver puts the child’s long-term development at risk. One 2011 study, published in the journal Attachment and Human Development, examined the effects of mother-child separation upon children under two years of age who had been apart from their mothers for a week or more. Most of the children came from low-income families. The researchers found that children who had been separated from their mothers at a young age showed more aggression and negativity at ages three and five, noting that involuntary separations were much more likely to have a negative effect. Meanwhile, a 2009 study of Chinese children who had been separated from their parents found that children whose parents had migrated in search of employment opportunities early in life were at greater risk of anxiety and depression later on.
Because the separations at the US-Mexico border are both forced and unexpected, they’re likely to be particularly damaging for kids. “The physical separation between a parent and child, particularly when unexpected as in the case of deportation, disrupts this essential secure base, risking internalizing symptoms (depression, anxiety), externalizing behaviors (withdrawal, aggression), and social and cognitive difficulties,” as one 2014 study (pdf) of detention and deportation of US migrants, published in the American Journal of Orthopsychiatry, explains.
The effects of being separated from a parent can be difficult even when children are well cared for—say, staying with a grandparent or another trusted relative. But under the new US policy, parents are prosecuted and their kids are taken into government custody. Children are treated much better than their parents—they have to be transferred to the Office of Refugee Resettlement within 72 hours of being taken into custody by Homeland Security, given access to free legal services, held in a safe, sanitary, and “least-restrictive” possible environment, and given time to play outside. But the number of minors entering the US illegally is set to soon outpace the space available for them. So the Trump administration is reportedly considering holding undocumented immigrant children in military facilities.
And there’s reason to believe that the US government isn’t a trustworthy custodian. In 2018, the Office of Refugee Resettlement, which handles the placement of undocumented immigrant children into shelters or with sponsors, reported that it could not “determine with certainty the whereabouts of 1,475” unaccompanied children who had previously been resettled with sponsors. And a 2016 report found that the Department of Health and Human Services unwittingly released a dozen minors into the custody of human traffickers.
In an April 26, 2018 oversight hearing, senator Rob Portman, the Republican junior senator for Ohio, gave an overview of the systemic ways in which US immigration officials are failing to enact basic protections to the children of undocumented immigrants. “We need to do better,” Portman said. In the weeks since, it seems, the US has been doing worse.
This reporting is part of a series supported by a grant from the Bernard van Leer Foundation. The author’s views are not necessarily those of the Bernard van Leer Foundation: But it is of Adamfoxie.blogspot.com

Email Subscribe, No Spam ..Get headlines into your mailbox every day. Don’t Miss Any Stories! 🦊

Over 5Million Reads Adam Gonzalez at May 26, 2018 No comments: Links to this post

Jimmy Kimmel takes time off to be with his family following his son's second successful heart surgery. Chris Pratt recreates a "Dirty Dancing" classic with Chris Stapleton while filling in for Kimmel as a guest host.
{ HLN }

Over 5Million Reads Adam Gonzalez at December 06, 2017 No comments: Links to this post