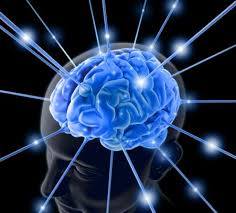 Friends, the future has arrived. Researchers at MIT have developed a device that can read your mind. It's called the AlterEgo, and it's designed to pick up your thoughts when you purposefully use "internal verbalizations," according to the MIT News Office. Not only can the AlterEgo hear your internal voice and transcribe your thoughts, but it's designed to be able to interact with other devices based on your thought commands.
Arnav Kapur, the MIT graduate student who led the development of AlterEgo, told the MIT News Office that the headset is "an intelligence-augmentation device," and said he and his team approached development by asking how they could create "a computing platform that’s more internal, that melds human and machine in some ways and that feels like an internal extension of our own cognition?”
Here's how it works: The AlterEgo fits over the wearer's ear and sits along their throat, just under their jaw, with another, smaller piece that sits in the groove between their mouth and chin. Embedded in these pieces are electrodes, which will "pick up neuromuscular signals in the jaw and face that are triggered by internal verbalizations [...] but are undetectable to the human eye," according to the MIT News Office. Neuromuscular signals from a user will be fed into a neural network that is trained by researchers "to identify [a fundamental set of] subvocalized words from neuromuscular signals, but it can be customized to a particular user," the MIT News Office reported.
MIT Media Lab on YouTube
AlterEgo users will also have a pair of bone-conduction headphones, and their function is basically straight out of a spy movie. The MIT News Office reported that "Because they don't obstruct the ear canal, the headphones enable the system to convey information to the user [by transmitting vibrations through the bones of their face to their inner ear] without interrupting conversation or otherwise interfering with the user's auditory experience."
The end goal of all this is a device through which you can communicate with the various devices around you, completely silently, and receive information in response. In a video showing Kapur using the device, he keeps track of how much he's spending in the grocery store by thinking the the price of each item he picks up — and an unseen device (but in everyday use, presumably the wearer's phone) keeps track of the total for him. In another part of the video, Kapur is shown playing Go, and was able to "silently report opponents' moves [...] and just as silently receive computer-recommended responses," the MIT News Office reported. Which, TBQH, is nothing short of wild.
Pattie Maes, who is a professor of media arts and sciences at MIT and has taught Kapur, told The Guardian that AlterEgo is all about being able to seamlessly interact with our devices without disconnecting from what's going on around us. "We basically can't live without our cellphones [sic], our digital devices," she explained. "But at the moment, the use of those devices is very disruptive. If I want to look something up that's relevant to the conversation I'm having, I have to find my phone and type in the passcode and open an app and type in some search keyword, and the whole thing requires that I completely shift attention from my environment and the people that I'm with." Thad Starner, a computing professor at Georgia Tech, told The Guardian he sees industrial uses for AlterEgo, particularly in places where communication is normally difficult. "You can imagine all these situations where you have a high-noise environment, like the flight deck of an aircraft carrier, or even places with a lot of machinery, like a power plant or a printing press."
While the AlterEgo isn't ready for commercial use yet, it's shown some pretty impressive capabilities. The MIT News Office reported that researchers conducted a study with the AlterEgo's prototype, and results indicated the AlterEgo has an average transcription accuracy of 92 percent — which will improve as researchers collect more training data for the neural network, Kapur told the MIT News Office.
With a fully functional AlterEgo at its most powerful, communication with artificial intelligence assistants like Alexa or Siri will be "less embarrassing and more intimate," The Guardian reported. However, The Guardian also points out a downside of AlterEgo: No matter how sleek the AlterEgo looks, it's going to be stuck to your face, and that can be a "barrier," The Guardianreported, adding that this barrier is part of why Google Glass wasn't super successful.
If intimate communication between humans and machines wigs you out a little, you probably aren't alone. But I for one am stoked to see where the technology in AlterEgo could take us, especially as AI further develops. And at the very, very least, if AlterEgo can keep me from having to grocery shop with my phone constantly, annoyingly in hand and the calculator app open, it's basically a technological miracle.
ByJAMES LOKE HALE first Posted on Bustle

It is adamfoxie's 10th🦊Anniversay. 10 years witnessing the world and bringing you a pieace whcih is ussually not getting its due coverage. 4.9 Million Reads
Over 5.6 Million Reads Adam Gonzalez at April 10, 2018 No comments: