Back to The Future: Falklands (Malvinas) and Vladimir Putin the Great KGB NukeThinker 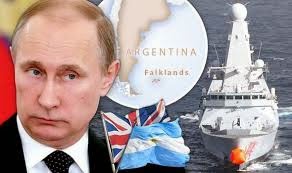 Who would imagine that we would be hearing war drum beats coming from almost the South Pole AGAIN? I remember an argentinian dictator who loved to dress up in white military attire, just like the pope except he carried medals covering his chest and he also carried a gun. The economy in Argentina was lower than the lower basement on a high rise. No employment and young college kids protesting the halting on civil liberties, meanwhile they kept disappearing. Mother’s went to the streets asking “Donde estan los perdidos?” (Where are the missing?)

Like every conniving dictator he decided to take the judging eyes off him and his troubles and failure as a leader and lay them on someone else. This time on Britain. He decided without any warning to invade the Falklands Islands. A small piece of real estate too cold to be abled to grow  You have some grass and  some land and mostly rocks to small and weathered beaten rocks and some houses. Nothing commercial then nor even to visit the few people inhabiting that piece of land unless you had to; Except for the few Britons living there ever since the time of a mighty kingdom called ‘The British Empire.’
To these Britons living there this was their home and their Island. The had the guts and know how to survive decade after decade of unpredictable cold weather. On the Argentinian side these were not the Falklands but “Las Malvinas.” Taken from them, by the mighty empire, Since then a sour point in any Argentinian conversation. This was the right stick to poke in the Argentinians pride, nothing like national pride to get people thinking alike.
The British being lead by what someone called at the time ‘The Iron lady’ Now after the years passed her titled changed with the younger generation of Britons to which they had nothing to show for from her long seat of power and the older ones that remember a period of unemployment and lack of everything but still high taxes and the rich doing good while the working people just became more poor with nothing to show for their labor. They call her now “The Witch,” On her funeral there were chantings: The witch is dead, the witch is dead!

Argentina had only one WW2 diesel powered aging sub but still capable to torpedo a ship  a squadron of Viet-nam era phantoms and few propeller bombers which struck the fear of god on the penguins and the small garrison of the British left there to keep a presence since no body thought anybody fool enough to try to take them by force.  Well, there was a fool with smart plans that for a while seemed to work. He ordered his Navy to cross the Atlantic and his small air force to take the islands and occupy the sky and so they did without much trouble from the birds, sheep and Penguins: However their victory was short lived in a matter of less than three months.The British converted the Queen Marry and any ship that would carry equipment and soldiers and  send them in the direction of the islands. The US was in a precarious position, which still is today. At the time that the US was trying to repair their relations with Latin America, now you had America’s closer ally Britan on one side and their relationship not just with Argentina but with the whole continent on the opposite side. Now the plans of the Dictator revealed it self. He asked the US if nothing else for moral back up. It took a while but the US finally came down on the side of what everyone knew she would, her old ally Britain. The US stayed out of conflict but gave satellite and intelligence to Britain so it would not have any of their ships blown out of the water before they got there. Once they got there, they lost ships and planes plus the men manning  them. 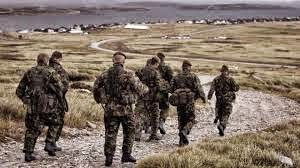 Once the British Garrison arrived at the Islands in a fierce fight like in the time of the vikings, man to man and knife to knife The british sunk the only Argentina s Sub in the area with no survivors and the new unveiled magic jet that could take off vertically proof it self a knock out for the Argentinian Air force and Navy. Argentina recalled its fighters so as not to loose them, something that decades latter another dictator in the middle east hid his air power (Dessert Storm) so they would not be destroyed and could be used in another war.

At the end we had a lot of young man killed on both sides to take possession of some overgrown sheep and confused penguins  The whole world including the Britons asks themselves if it was worth it. The answer is so simple I wont even print it here because it will offend me. But that is war! Some men or woman with power that we have given them, safely tuck away, orders young kids to go and kill each other.

Now the biggest instigator since Hussein in Iraq, self serving and with no purpose to be alive except to make the world unsafe is now picking on the same islands to poke a stick this time to both Britain and the US. The US with no stake on those dots of islands and no purpose to get involved except for the US heading several alliances that will bring her face to face with a guy that most be bored and loves to pout and stick his finger on the Nuclear trigger.

(Editorial)
Now you see why the rush to the Moon, Space and to dig holes in the bottom of the Earth. Not to save you or me nor our families when a dictator like Putin will misjudge the US or another Nuclear Power and press the trigger, You and I would be gone, but he wont be and neither would those people that we pay for their livelihoods to keeps us, educated, heathy and alive and SAFE. All of those goals already being discussed by one of our parties as something the government doesn’t have to do. The Republicans in this government argue that we have to pay for our education, Doctors and stay alive in war or peace and they argue that there should be no government except for a bunch of rich guys to come together in the club of congress and discuss between each other how they can get more powerful without having a government and people to take care of. We go tot he polls and re elects them or people like them election after election. The holes in the ground is for them because they passed the law to have constructed. Just like when they pass a law to raise their salaries.

Matthew Holehouse:
Britain will send two troop-carrying Chinook helicopters and new surface-to-air missile system to the Falkland Islands, amid fears Russia could be arming the Argentine government.
Michael Fallon, the Defence Secretary, said the Islands will be ready to repel “any potential threat” following reports that the Kremlin is preparing to lease 12 Su-24 long range bombers to Buenos Aires in exchange for beef and wheat.
It came as Russia questioned the legitimacy of Britain’s claim on the Islands.
Alexander Yakovenko, the Russian Ambassador in London compared the referendum held in 2013 that found 99.8 per cent of the Falkland Islanders wanted to remain a British territory to that held in Crimea last year.
The snap Crimean referendum, held at gunpoint and used to justify Putin’s annexation of the Ukrainian peninsula, was denounced as a sham by Britain.
Some £180 million will be spent over the next decade in upgrading the island’s defences, Mr Fallon told the Commons.
Two Chinook helicopters, which were sent to Afghanistan in 2006, will return and allow troops to respond to possible incursions more quickly, while a new system will replace the Rapier air defence missiles when they go out of service at the end of the decade.
The Mount Pleasant garrison will get a new communications system, while Mare Harbour will be upgraded.
The troop levels will remain at around 1,200, and a British patrol vessel – currently HMS Clyde – will remain stationed off the Islands.
Archive Falklands: unseen footage from frontline

It followed a review that found the Islands’ defences are “broadly proportionate” to the current threat level.
Mr Fallon said: “We will continue to defend the right of the islanders to determine their future and defend their way of life against whatever threats may arise.”
David Cameron added: "The assurance that I can give the Falkland Islands is that we will always be there for them, we will always defend them.”
The Russian intervention came in response to Philip Hammond, who used the first anniversary of the Crimean annexation to condemn the “sham” referendum as a “fig leaf” for Putin’s “land grab”.
In a statement, the embassy said: “In its rhetoric Foreign Office applies one logic to the referendum in the Malvinas/Falklands, and a different one to the case of Crimea.”
It followed weeks of rhetoric from pro-Kremlin newspapers and leading Russian MPs denouncing Britain’s “colonial occupation” of the Islands, which they dubbed the “Crimea of the Atlantic”.
Alexei Pushkov, the head of the Duma’s committee of international affairs, wrote on Twitter: “Information for London: Crimea has immeasurably more reason to be a part of Russia than the Falkland Islands to be part of the UK.”
Cristina de Kirchner, the Argentine president, has backed Putin.
“The Malvinas has always belonged to Argentina, the same way that Crimea also belonged to the Soviet Union until it was given to Ukraine,” she said last year, in comments that delighted the Russian president.
The Kremlin’s reported deal with Mrs Kirchner’s government will ease the pressures on Russia’s food supply due to western sanctions, and comes alongside arms deals with Venezuela, Bolivia and Peru.
Buenos Aires has intensified its claim since oil exploration began. In 2011 Mrs Kirchner called David Cameron "arrogant" for insisting the islands will remain British as long as their inhabitants wish to.
British oil company Rockhopper Exploration revealed significant discoveries of oil, which it says are enough oil to make the Falklands a significant production centre.
The British government last year rejected calls to sit down with Argentina to “negotiate” sovereignty over the islands.
Some 649 Argentines, 255 British armed forces personnel and three Islanders died in the 1982 war.

Matthew Holehouse
Over 5.6 Million Reads Adam Gonzalez at March 26, 2015 No comments: Links to this post