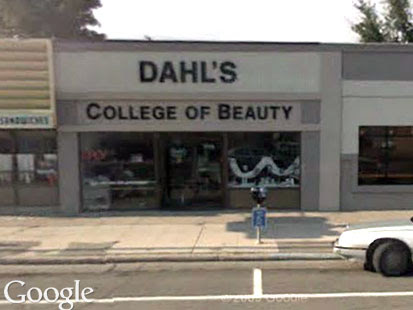 A lawsuit filed by former students and employees against Dahl's Beauty School alleges student were subjected to sexual harassment. (Credit: Google)
A lawsuit filed by former students and employees alleges a beauty school in Montana used federal dollars to enroll students in education programs with unqualified instructors that subjected the students to sexual harassment, including pubic waxing.
According to the lawsuit filed on Aug. 14,  students paid nearly $10,000 for instruction at Dahl’s College of Beauty in Great Falls and were subjected to instructors who were “sleeping, surfing the Internet, conducting business, failing to properly teach the curriculum, and improperly delegating their teaching and supervision duties to unqualified, unlicensed students.”
An individual who answered the phone at Dahl’s College of Beauty declined to comment to ABC News. And efforts to reach the individuals named in the suit were not immediately successful.
The lawsuit, which was filed at the United States District Court for the District of Montana, states, during the course of study, students were subjected to harassment by a instructor who was promoted to director.  The suit alleges the instructor’s unwelcomed conduct includes “publicly exposing her genitals, exposing her buttocks and requesting that students examine a boil to see if it could be extracted, and requiring students to wax her pubic hair.”
This story first appeared on Courthouse News.
The suit alleges that a student’s trimmers and wax stick was used to wax an instructor’s pubic hair, which was then used to give hair cuts to customers.
“None of this conduct was a legitimate part of the curriculum…,” the suit continues.
The students accuse the beauty school of deliberate indifference to the harassment by allegedly failing to correct or otherwise remedy the harassment,  failing to establish any complaint procedure whereby students could obtain redress for discriminatory behavior” and by “termininating the students in retaliation for complaining about the offending behavior.”
The lawsuit filed on behalf of 17 former students and employees allege breach of contract, wrongful discharge, and unjust enrichment.
The plaintiffs are seeking damages, including punitive damages, to be determined at trial and attorney fees and costs.

Over 5Million Reads Adam Gonzalez at August 17, 2012 No comments: Links to this post