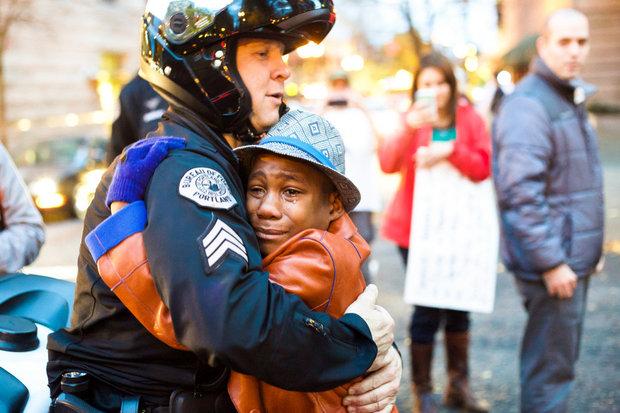 In this photo shot by freelance photographer Johnny Nguyen, Sgt. Bret Barnum (left) hugs 12-year-old Devonte Hart during the Ferguson rally in Portland on Nov. 25, 2014. (Johnny Nguyen/Special to The Oregonian)


It is adamfoxie's 10th🦊Anniversay. 10 years witnessing the world and bringing you a pieace whcih is ussually not getting its due coverage. 4.9 Million Read 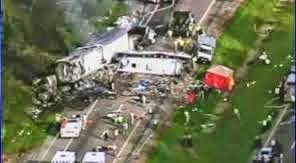 Another passenger on the limo bus was killed in the accident on the New Jersey Turnpike involving the bus, two tractor-trailers, a sports utility vehicle and two other vehicles. The accident occurred at around 1 a.m. on Saturday morning near Cranberry Township, Williams said.

“The limo bus is the only vehicle that overturned,” Williams told CNN. “Looks like one of the tractor-trailers may have rear-ended that limo bus, but that's preliminary at this time.”
He said he did not believe alcohol played a role in the accident, but said that is part of the investigation.
Six other people besides Morgan were injured, Williams said.

Morgan was on the road for his "Turn it Funny" stand-up comedy tour. He was booked to perform at a casino in Dover, Delaware, on Friday night and had been due to appear on Saturday in Charlotte, North Carolina.

The comedian, a native of New York City, spent seven years on "Saturday Night Live" before leaving the cast in 2003. He went on to star in the sitcom "30 Rock" for seven seasons, playing an unhinged, reckless comedian called Tracy Jordan in a network television satire that caricatured his SNL days.

"30 Rock" also skewered Morgan's sometimes inflammatory stand-up routine - on more than one occasion he has publicly apologized for making jokes about gay and disabled people.

Morgan, a diabetic, had a kidney transplant in 2010.

Peter Haigney, a spokesman at the hospital where Morgan was being treated, said the hospital was treating a total of four people from the accident, three of them in critical condition.

He gave no other details and referred queries about Morgan to the actor's publicist, Lewis Kay. Kay said he would release a statement later on Saturday.

Police said they were still investigating the crash, and whether alcohol was involved.
Celebs react on Twitter
As news of the accident broke early Saturday morning, fellow celebrities and friends took to Twitter to express shock and send their thoughts out to Morgan.

"€œSending prayers and love to @RealTracyMorgan & all injured in the NJ accident. I'm pulling for you brother," wrote "€œPsych"€ actor Dulé Hill.

Jay Mohr, like Morgan a "€œSaturday Night Live" alum, noted the severity of the accident. "I'm from NJ. For the Turnpike to be closed for hours is incredibly, frighteningly rare,"€ he tweeted. "€œI love you @RealTracyMorgan. No more comics, God."
David JonesReuters