US Injured Airman Argument about Flying Gay-American Flag on base 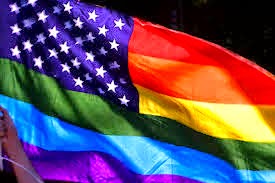 To have the story in contest, there was an airman that won the right to fly the gay american flag you see above. This story concentrate when a very  well known injured airman goes about fighting this decision with the navy and loose. It was thought that if the flying of the flag was challenged it would be taken down. What they forgot is a Navy that has evolved because their commander in chief evolved.   Adam Gonzalez

An outspoken wounded veteran  from Tucson has caused a stir on social media over his objection to a flag he calls an affront to the American flag.
Instead of red-and-white stripes the flag flying recently at a home on Tucson's Davis-Monthan Air Force Base has stripes of rainbow colors — traditionally used to show gay pride.
Former Senior Airman Brian Kolfage, who lost two legs and an arm in an attack in Iraq, says the flag parodies the American flag.
Kolfage says it's illegal and had no business flying on a military base.
"I was cutting across base on Saturday when I saw the flag flying," Kolfage said. "It was a new thing to see for me."
Kolfage, 33, is a Purple Heart recipient who served two tours in Operation Iraqi Freedom. After his injuries, he graduated from the University of Arizona with an architecture degree and frequently shares his political views on the Internet.
He wrote an article about his displeasure over the flag for his blog, briankolfage.com, citing Title 4 of the U.S. Code.
Kolfage said he received a tremendous response on social media.
"I heard from a lot of Air Force people thanking me for saying what they couldn't say as active duty personnel," he said. "I felt like I should allow people to be heard, so I wrote an article for The Blaze."
Base officials disagreed with his objection.
On Monday, he was contacted by email by the Davis-Monthan public affairs office.
"We are currently reviewing this issue and have taken no action at this time. We take seriously our responsibility to abide by federal law and defend the Constitutional rights of all citizens," wrote the 355th Fighter Wing Public Affairs Office.
On Wednesday, he received their final ruling.
"The installation commander carefully considered the opinions of legal professionals and the law. The display in question is not an altered U.S. flag; therefore, its display does not violate federal law. No action will be taken."
Erin Ranaweera, a spokeswoman for the base, gave the Star an identical response to questions about the ruling.
If the flag didn't look so similar to the American flag, Kolfage said he wouldn't have had an issue.
"People are allowed to have their own beliefs," he said. "I just think the two flags should be separate."
Active duty personnel can't have Christmas parties on base and their freedom as far as what they can display on base housing is limited, according to Kolfage.
"They were more concerned about political correctness than legality," he said.
Although the ruling didn't cite freedom of speech, Kolfage believes they came close by deciding the flag didn't break the law.
"Had they used free speech, everyone would be free to put up what they wanted. This decision was biased and selective.”
Caitlin Schmidt
tucson.com
Over 5Million Reads Adam Gonzalez at February 06, 2015 No comments: Links to this post