An Oklahoma mother's offer to stand in as the parent for LGBTQ couples if their own parent or parents choose not to on their wedding day has been shared thousands of .
Sara Cunningham, a 54-year-old mother of two and an ordained minister, wrote her Facebook post after hearing from several same-sex couples without a supportive parent on their wedding day.

Cunningham back in 2013 raising her right hand and wearing a necklace.

Just days before her now-viral post, Cunningham said several women had shared with her emotionally devastating stories at a same-sex wedding rehearsal in which Cunningham was participating.
One woman recounted how her mother asked to be given "a heads up" when it was time for her daughter to kiss her bride, presumably so her mother could turn away. Another woman shared how her mother chose not to attend.
“That’s what prompted the post, and I had no idea I would hear from so many in the community,” Cunningham said, including “parents from all around the world that are willing to stand in."
Cunningham said her own story of not initially accepting her son as gay is a big part of what triggered her advocacy and support for the LGBTQ community.
“His whole life he came out to me, but I thought it was a phase,” she said.

In 2014, Cunningham’s son Parker “came out” to her about his relationship with a man.
“When he turned 21, that’s when he said 'I met someone, and I really need you to be okay about it,'” Cunningham recalled.
That’s when Cunningham said she went into a deep depression and stayed in her room not accepting reality.
“I wrestled with my faith as if I had to choose between my faith and my son,” Cunningham added. “I reexamined everything I believed."
Her mindset changed when her son lay beside her and told her why she needed to support him.  “I’ve sucked it up being your son for 21 years. I need you to suck it up and be my mom,” she recalled her son saying.
Cunningham then sought out resources to learn more about the LGBTQ community and eventually became an advocate, even self-publishing a book about her experience.
A pastor from Expressions Church, an LGBTQ-affirming church near Cunningham's home, reached out to her after learning about her struggle. She started attending after serving at a conservative church for 20 years.
As a part of Expressions Church, she founded a group called Free Mom Hugs that offers resources for and about the LGBTQ community for schools, churches and hospitals.
In 2015, she and her husband met a same-sex couple on vacation in Virginia Beach that asked her to officiate their wedding the following year. Cunningham's pastor ordained her so she could grant the couple's request.
Cunningham traveled to Mississippi to marry the couple in 2016 and has been officiating other weddings for LGBTQ couples ever since.
“We’re lucky to have each other and be in each other’s life,” Parker Cunningham said of his relationship with this mom. “We have to represent parents giving their children a chance."
Since her viral Facebook post, Cunningham said she has received roughly 100 private messages of encouragement, along with “horror stories” from same-sex couples whose parents do not support them.
"Everyone needs their mom,” she said, regardless of whether their child is gay or straight. Cunningham also has a son who is straight.
“To deny that on the most important day of their lives is devastating,” she added. “I wanted to make the day better." 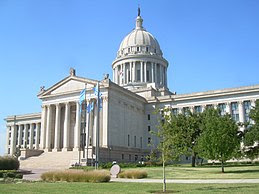 Saying Oklahoma's ban on gay marriage is "arbitrary" and "irrational," a federal judge ruled the ban violated the constitution and it should be struck down.

U.S. Senior District Judge Terence Kern, however, put a hold on his ruling, pending an appeal. This means gay marriages will not begin immediately in the state.

Kern said Part A of the Oklahoma Constitutional Amendment — which stipulates marriage in the state should only consist of "one man and one woman" — "violates the Equal Protection Clause of the Fourteenth Amendment to the U.S. Constitution by precluding same-sex couples from receiving an Oklahoma marriage license."

Kern acknowledged that the Supreme Court has never specifically ruled on how bans on gay marriage relate to the Fourteenth Amendment. That's the case even when the high court decided United States v. Windsor, which overturned the federal Defense of Marriage Act, which similarly defined marriage as a union between one man and one woman.

"However, Supreme Court law now prohibits states from passing laws that are born of animosity against homosexuals, extends constitutional protection to the moral and sexual choices of homosexuals, and prohibits the federal government from treating opposite-sex marriages and same-sex marriages differently," Kern writes. "There is no precise legal label for what has occurred in Supreme Court jurisprudence beginning with Romer in 1996 and culminating in Windsor in 2013, but this Court knows a rhetorical shift when it sees one."

Because of that, Kern reviewed the case under the Equal Protection clause and found that banning gay marriage in Oklahoma deprives one class of Oklahoma citizens of a governmental benefit for no good reason.

"The Bishop couple has been in a loving, committed relationships for many years," Kern writes about two of the plaintiffs. "They own property together, wish to retire together, wish to make medical decisions for one another, and wish to be recognized as a married couple with all its attendant rights and responsibilities. Part A of the Oklahoma Constitutional Amendment excludes the Bishop couple, and all otherwise eligible same-sex couples, from this privilege without a legally sufficient justification."

Shelby did not issue a stay of his decision, so gay marriages were held in the state, until the U.S. Supreme Court issued a ruling halting the ceremonies. Utah is currently appealing Shelby's decision before the U.S. Court of Appeals for the 10th Circuit.

In a statement, Gov. Mary Fallin said she was "disappointed" in the judge's ruling. She went on:

"In 2004, the people of Oklahoma voted to amend the state's constitution to define marriage as 'the union of one man and one woman.' That amendment passed with 75 percent support.
"The people of Oklahoma have spoken on this issue. I support the right of Oklahoma's voters to govern themselves on this and other policy matters. I am disappointed in the judge's ruling and troubled that the will of the people has once again been ignored by the federal government."
Update at 6:46 p.m. ET. Guaranteed By The Constitution:

"Judge Kern has come to the conclusion that so many have before him – that the fundamental equality of lesbian and gay couples is guaranteed by the United States Constitution. With last year's historic victories at the Supreme Court guiding the way, it is clear that we are on a path to full and equal citizenship for all lesbian, gay, bisexual and transgender Americans. Equality is not just for the coasts anymore, and today’s news from Oklahoma shows that time has come for fairness and dignity to reach every American in all 50 states."