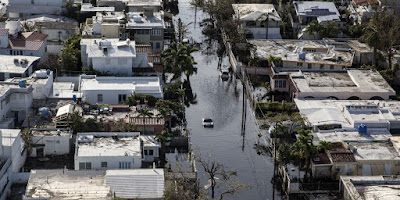 LENDERS TO PUERTO Rican homeowners have kicked foreclosures into high gear in the aftermath of Hurricane Maria, skirting local and federal borrower protections. According to attorneys and experts, lenders have ignored federal moratoria on foreclosures; placed notices of default in newspapers where they’re unlikely to be seen; sent files to homeowners in English rather than Spanish; and required residents to complete tasks that are borderline impossible without electrical power yet fully restored, among other abuses.
The foreclosure horrors add to Puerto Rico’s Dickensian experience of late. Close to 35 percent of the island remains without power after Hurricane Maria, with full restoration not expected until May. At least 100,000 people have left the island. Abandoned pets are everywhere. Government services have been slashed or hobbled. Even one major proposed solution, wiping out Puerto Rico’s debt, will take a personal cost: The bonds represent the life savings of many residents to whom the financial products were aggressively marketed without explanation of the downsides.
Ultimately, the expected wave of foreclosures could prove worse than what happened in the most hard-hit areas in the U.S. mainland during the Great Recession. According to the New York Times, roughly one-third of 425,000 Puerto Rican homeowners have fallen behind on mortgage payments, and with jobs scarce after the hurricane, that number will likely grow. In fact, the economy of the island could collapse, as the Republican tax bill imposes a 20 percent tax on offshore exports — a category that includes Puerto Rican manufacturing.
But if you think America learned lessons from the orgy of illegality that accompanied foreclosures in the United States after 2008, just look to Puerto Rico. Despite new rules to prevent foreclosure fraud, Puerto Rico appears to be Exhibit A in its continuation — and it’s only just beginning.
Piles of home foreclosure documents inside wooden paper holders in the court of first instance, in Bayamón, Puerto Rico, Tuesday, June 20, 2017. 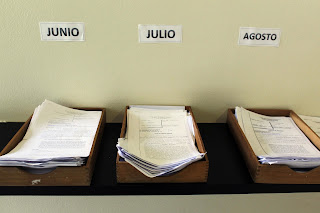 FORECLOSURES RAVAGED PUERTO Rico even before Maria, up 130 percent in 2016 relative to a decade before. Adding two hurricanes to the equation makes the island’s residents ripe for a gargantuan ripoff.
The foreclosure process in Puerto Rico resembles the judicial foreclosure process on the mainland. Lenders must follow federal guidelines on notifying borrowers of default and giving them an opportunity to cure debt. Then lenders can file a lawsuit for foreclosure. Judges are obligated to impose mandatory mediation, bringing borrowers and lenders to the table to work out a resolution. Only if that doesn’t work can lenders obtain a judgment and evict the homeowner.
However, what sounds like substantive protections for the borrower often don’t play out that way. “Many times they don’t know about their rights,” said Veronica Rivera, a coordinator for Derecho a Tu Casa or Right to Your House — a coalition of legal aid groups providing information and assistance to homeowners facing foreclosure. “They think that the bank would understand that they can’t pay because they lost their jobs. It surprises me sometimes how much trust people have in the banks.”
For example, after Hurricane Maria, the federal government imposed a foreclosure moratorium on homes either backed by government-sponsored mortgage giants Fannie Mae and Freddie Mac, or those with Federal Housing Administration insurance. The FHA moratorium was recently extended to March 19, 2018, but it only applies to a sliver of loans. The Fannie and Freddie moratoria were set to expire on December 31, but the lenders this week made an extension until March 31. Banks and mortgage investors voluntarily offered three months of relief from payments, but homeowners had to call their lender to trigger it. “The banks said you have to call,” said Rivera. “We didn’t have internet for more than a month, didn’t have electricity, no communication. Many didn’t know.”

“They think that the bank would understand that they can’t pay because they lost their jobs. It surprises me sometimes how much trust people have in the banks.”

Indeed, a report from the public interest firm Hedge Clippers shows that one company, Roosevelt Cayman Asset Co., has 289 active foreclosure cases in federal court and another 56 in local Puerto Rican courts. Federal courts, typically not a venue for foreclosure cases, are seen as faster than local courts, so offshore companies like Roosevelt lean heavily on them.
Even after the hurricane, Roosevelt has filed motions for default judgment or eviction in the cases. The Intercept has reviewed lists of dozens of these motions. For example, Roosevelt filed a motion for eviction of Ernesto Santiago-Guzman and his family on October 11, three weeks after Maria hit, and a motion for default judgment against Elias Rivera-Rivera on October 12. U.S. District Judge Gustavo Gelpí denied that request because the case was only initiated a month before the hurricanes, “which trashed the entire island of Puerto Rico.” The judge postponed the case until March.
Other judges have not been so kind. Docket entries show that Roosevelt secured a default judgment against Carlos Gonzalez-Luna’s property on October 23.
Many of the loans Roosevelt acted on were purchased in a fire sale from the Federal Deposit Insurance Corporation after the 2015 failure of Doral Bank, a lender with a large portfolio of Puerto Rican mortgages. These loans were severely delinquent, some over two years. Federally insured distressed mortgages in Puerto Rico have become an appetizing target for Wall Street land speculators seeking to make a quick buck and turn Puerto Rico into a playground for the rich.
An unidentified Puerto Rico homeowner submitted a comment to the Consumer Financial Protection Bureau’s consumer complaint database, claiming that Roosevelt is “not flexible and expressed that they just want to acquire the home to build their house portfolio.”
Critics allege Roosevelt uses sleazy tactics to get default judgments. “Since the hurricane, they’ve sought to use service by publication, publishing names in the newspaper to serve the lawsuits. Who’s reading the newspaper these days?” asked Jim Baker, founder of the Private Equity Stakeholder Project, who helped with the Hedge Clippers report. “Then they ask for default judgment because they served papers and the homeowners haven’t responded. In most cases, they’re getting [the judgment],” he added, referring to Roosevelt.
Roosevelt is an affiliate of Rushmore Loan Management Services, which in turn services loans owned by private equity giant TPG Capital, managers of $73 billion in assets. While TPG spokesperson Patrick Clifford claims only a client relationship between Rushmore and TPG, Rushmore’s principal owners are senior TPG executives. A June 2017 report lists Rushmore as the second-largest repossessor on the island, behind only Banco Popular, Puerto Rico’s main bank.
(A new TPG “impact investing” fund includes on its board Pierre Omidyar, founder of First Look Media, The Intercept’s parent company.)
Activist groups held protests outside TPG headquarters in Manhattan on Wednesday, calling for an end to foreclosures on the island. Related demonstrations were held in eight cities around the world. “This is the first of many companies hurting the people of Puerto Rico and it will be one of many we will be scrutinizing,” said Julio López Varona, a spokesperson for Hedge Clippers, in a statement. “We have asked TPG and Rushmore directly to stop their foreclosures and we will continue to target them until they stop harming Puerto Ricans.”
This appears to have made an impact. Rushmore claims to have “instituted an immediate suspension of foreclosure proceedings in Puerto Rico,” per spokesperson Steven Goldberg, including stopping notice by publication. The length of the freeze is indefinite.
“Rushmore pursues the loan modification or other alternatives to foreclosure first in all cases and remains fully committed to working to keep as many borrowers as possible in their homes,” Goldberg said, “especially in light of the extremely challenging circumstances caused by the hurricane.” He said the company has conducted “extensive outreach efforts” to contact borrowers, given communication problems on the island. Goldberg even provided the number to Rushmore’s Puerto Rico office, (877) 509-8389, and its Spanish and English websites, urging borrowers to contact them to seek a resolution to their situations. 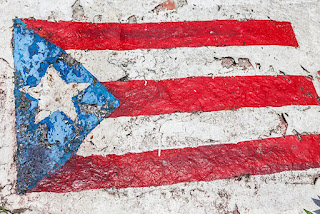 TPG’s Clifford added, “We’ve been in constructive dialogue with various advocacy groups, and we plan to continue having those conversations because they are important.”

EVEN IF HOMEOWNERS were lucky or savvy enough to fall under the foreclosure moratorium, it expires December 31 for loans backed by Fannie Mae and Freddie Mac, and by March for FHA-insured loans. Many have called for those to be extended, but no decision has been made. 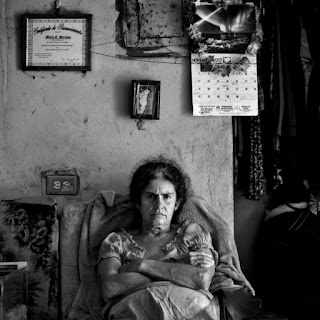 The voluntary payment moratoria also expire in January. In an opinion piece for the Puerto Rican newspaper El Nuevo Dia, Ricardo J. Ramos González, who runs the Legal Aid Clinic at the University of Puerto Rico’s School of Law, warned residents that the payment moratorium merely comprised forbearance, not a cancellation of payments. “Those who accepted the moratorium on payments could very well face a process of collection and eventual foreclosure of their main home, if they are required to pay three months plus the current term,” González wrote. He endorsed a yearlong moratorium on foreclosures, similar to those instituted in some states during the Great Depression.
When foreclosure notices and letters from lenders come in the mail in Puerto Rico, they are typically in English. But many Puerto Ricans only speak Spanish. Unlike in local courts, federal court filings are similarly in English, putting homeowners at a disadvantage.
Rivera of Derecho a tu Casa claims that lenders have been negotiating loss mitigation with borrowers while also pursuing foreclosure, a scheme known as “dual tracking,” which is supposed to be illegal under federal mortgage servicing laws and local law in Puerto Rico. The mediation process has not assisted borrowers more generally. “Lawyers cannot participate in the process unless the client gives us special power,” said Rivera. Worse, lenders send representatives who are not empowered to make decisions, she explained. “It’s a pro forma process,” said Rivera. “The banks do not have to give a specific option.”
Foreclosure lawyers in Puerto Rico are also finding the same discrepancies in foreclosure processing that roiled the United States after the crisis. This is not surprising since those errors never really stopped in the United States. Rivera alleges that investors who came in and scooped up distressed mortgages didn’t follow property records procedures. “There have been cases where there is no mortgage. They don’t have the note,” Rivera said.
The endgame of aggressively foreclosing on properties in Puerto Rico — where there is little hope of turning them around to make a profit — is unclear. Offshore lenders “made this investment a couple years ago,” said Baker of Private Equity Stakeholder Project. “They’re churning through the portfolio. Maybe they believe the land is worth more than keeping people in the homes.” The insurance payouts also benefit offshore purchasers of distressed mortgages; that alone could turn a profit relative to the small price paid.
Derecho a tu Casa offers resources at its website to educate homeowners and also representation for those who qualify. “Many people get depressed and we want to give them hope,” Rivera said. “I can see the difference when I represent someone.”
David Dayen
The Intercept
Over 5Million Reads Adam Gonzalez at December 27, 2017 No comments: Links to this post

Building a Home for LGBT Seniors in New York City