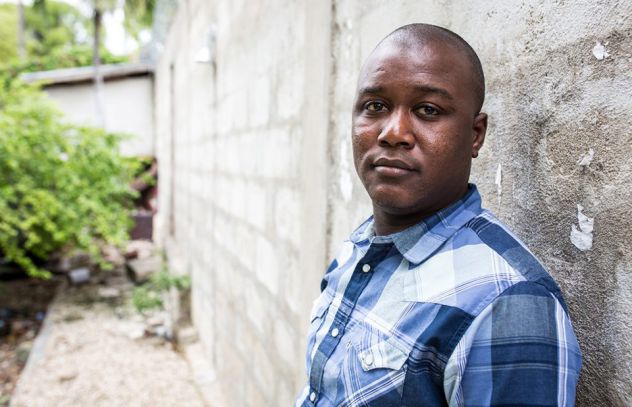 More than three weeks after the death of a prominent gay rights activist in Haiti under suspicious circumstances, he still has not been buried and no autopsy has been performed to find the cause.
Charlot Jeudy, the President of Haiti’s lesbian, gay, bisexual and transgender (LGBT) community organization Kouraj, was found dead at his home in November. Investigations into the circumstances of his death are ongoing. UNAIDS remembers Mr Jeudy as a fearless campaigner for human rights.
In the aftermath of the devastating earthquake in 2010, the people of Haiti worked to overcome the loss of homes, businesses, public services and more than 100 000 lives. But amid the shared trauma and determination, a harmful narrative emerged.
Some people began to blame the masisi—a derogatory Haitian Creole term for gay men. They thought that the disaster was divine punishment for the sins of the LGBT community. Members of sexual and gender minorities found themselves subject to intensified exclusion and abuse. Human rights organizations documented cases of LGBT people being denied access to emergency housing, food, health care, and work. There were also reports of physical assaults and homophobic rape.
Rather than accept the situation, Charlot Jeudy decided to act. He created Kouraj, which means courage in Haitian Creole. In the struggle for equal rights, Kouraj emphasized the importance of community empowerment and aimed to inspire pride and confidence among LGBT people.
“We wish to put forward an alternative discourse on homosexuality in Haiti because for too long only homophobes have discussed our reality and proposed their own interpretation,” Mr Jeudy said in 2011.
Over the next eight years, Kouraj evolved to offer community training, legal and psychosocial services and sexual health education. It became one of Haiti’s leading advocates for ending discrimination against LGBT people and has played a key role in resisting the introduction of discriminatory laws.
The organization was aptly named. Its members have contended with verbal abuse and death threats. Three years ago, it had to cancel a festival to celebrate the Afro-Caribbean LGBT community after numerous threats of violence. According to friends, Mr Jeudy resisted their pleas to leave the country at the time. In response to a spike in reports of anti-LGBT street violence last year, he worked with the United Nations on a project to promote tolerance and equal rights.
John Waters, Programme Manager of the Caribbean Vulnerable Communities Coalition, paid tribute to Mr Jeudy’s leadership.
"I have watched Charlot Jeudy grow from a young, impatient and impassioned activist into a thoughtful, strategic leader, capable of using human rights not as a sword, but as a shield,” said Mr Waters. “He won over the hearts and minds of others to create allies. Mr Jeudy has left a huge gap in human rights work in the Caribbean. He raised the bar for those who must now follow in his footsteps.”
Mr Jeudy was also an active civil society representative on the body that oversees the management of Haiti’s response to HIV, tuberculosis and malaria.
“Under Charlot Jeudy’s leadership, Kouraj was a model partner,” said Fritz Moise, Executive Director of the Foundation for Reproductive Health and Family Education. “His death is a big loss for the response to HIV in Haiti.”
UNAIDS has added its voice to the expressions of grief and also paid tribute to the leadership of Mr Jeudy.
“Charlot Jeudy exemplified the power of communities to be the voice for the voiceless and to make meaningful change in people’s lives,” said UNAIDS Country Director for Haiti, Mame Awa Faye. “This World AIDS Day we celebrated the power of communities to make a difference. Mr Jeudy did just that.”

UNAIDS and Miami Herald
Over 5.6 Million Reads Adam Gonzalez at December 27, 2019 No comments: Links to this post