Filipino Archbishop: Oscar Cruz Math Does Not Ad Up on Gay Marriage

His Math: 2 gay Men=No    Male+gay+Lesbian= Archbishops happiness  Gay Are Not Marrying the Aercgbishop to make him happy.  They need to make themselves happy.

What The Church does not seem to understand is that sex is none of their business. They have made it their business by methods that includes lies and scaring people about something they can’t give or take away  and that’s a person’s salvation if the person believes in it.
Coupling with two consenting adults individuals and what they do in bed belongs nowhere outside that bed. Two people loving each other and making a commitment for life cannot be wrong in any language religion or god you choose because that’s what life is all about. To be able to love, to be able to commit, to be able to have a partner to help you endure the good and the bad that life as in store for all of us.
I am posting this crazy thought about a Lesbian and a gay male it might be ok.. Why would it be ok?  Because some man in robes says is better for his life. Is not anyone’s life we discussing here but gay lives. We are born gay and lesbian probably also.  Now you want a sister and a brother to marry each other. This is sick, uneducated thinking because if you knew what a gay man is or a lesbian no one would say that for fear of being laughed out of their city. Gay and lesbian are asking for fairness because we are here we were born by you and now you want to throw your sons and daughters over board.  The Filipino people have gone through out on WW2 and have learn to leave together. They have so many official languages and then the dialects, IM surprised they can talk to each other at all. But they do it. They look and are related to spanish, japanese, poli., chinese, etc. They learn that different does not means bad, I am sure that just like Europe, Vietnam and the Americas with Canada have gay marriage they will learn why you have this happening and is just a matter of fairness, that is all. I know Filipinos to be good hearted and smart. I am sure this will happen with the same timing of Viet name and the Federal government of the uS.  Adam Gonzalez, Publisher 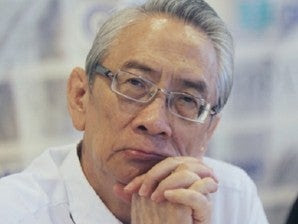 Retired Archbishop Oscar Cruz. INQUIRER FILE PHOTO
[Below is the report coming out of Manila on the Inquirer News]
MANILA, Philippines — Two homosexual men cannot marry but a gay man and a lesbian can tie the knot, according to the head of the Catholic Church’s matrimonial court.
Archbishop Oscar Cruz, judicial vicar of the Catholic Bishops Conference of the Philippines-National Appellate Matrimonial Tribunal, all but ruled out any chance of the Catholic Church agreeing to same-sex unions in the Philippines but said a lesbian and gay man might be allowed to marry.
“May a lesbian marry a gay man? My answer is ‘yes’ because in that instance the capacity to consummate the union is there. The anatomy is there. The possibility of conception is there,” Cruz told a church forum on Tuesday.
“I ask this question to myself and I have thought about it for a long time and the answer is ‘yes’,” he said.
Cruz was explaining the Church’s opposition to gay marriage or same-sex civil unions.
Several European church leaders — including Godfried Cardinal Daneels, the former Archbishop of Mechelin-Brussels, and the Vatican spokesman, Fr. Federico Lombardi SJ — recently made statements that were seen as hinting of eventual Church approval for gay civil unions.
But Cruz said gay advocates would have a difficult job getting legal approval for gay civil unions in the Philippines, a predominantly Catholic country.
“That will be against the Constitution and against the Family Code of the Philippines. So, they have to revise the Constitution for that,” he said.
“The law says marriage is between a man and a woman and for raising a family,” he said.
Cruz said the Catholic Church would oppose gay civil unions and other related proposals if these were filed in Congress.
“For the Church, even if you turn it upside down and call it by another name, it would still not be marriage. For the Church, even if a hundred (judges) bless a same-sex wedding, it would still not be effective,” he said.
The Church earlier warned that after the passage of the controversial Reproductive Health Law, similar proposals for same-sex marriage, divorce and euthanasia would follow.
However, gay groups have denied actively pushing for gay marriage in the country. They accuse the Church of using the issue to block other gay civil rights legislation proposals.
“They always use that as a specter to block any other piece of LGBT (lesbian, gay, bisexual, transgendered) rights legislation,” said Jonas Bagas, executive director of the TLF Share Collective.
“So, even with the anti-discrimination bill, they would frame it as a gay marriage bill,” he said.
Cruz said homosexuality would be a valid ground for the annulment but has been seldom used as a reason in annulment petitions.
“More often, it’s is about psychological problems, meaning there is some kind of mental impairment or emotional disturbance,” he said.
Over 5Million Reads Adam Gonzalez at June 23, 2013 No comments: Links to this post