Images of a Japanese whaling operation(above) have been released after a five-year legal battle.
Australian customs officials filmed the footage in 2008 but Canberra tried to suppress the pictures saying they could harm relations with Tokyo.
The Australian government was forced to release them after a prolonged Freedom of Information bid by anti-whaling group Sea Shepherd.


North Atlantic right whales are facing a severe threat of extinction after this year saw the death of 17 of the species, leaving their numbers dwindling at around 450 individuals in the wild.
Given the situation, the National Oceanic and Atmospheric Administration is set to watch their migration down south along the Atlantic coast and has cautioned fishermen and boats in the region to steer clear of them.
But, NOAA scientists warned the species is already under severe threat and extinction could be a very real possibility.
In a November report, the organization said the deaths of right whales in American and Canadian waters was a blow to the already declining numbers; this prompted a meeting of officials on last Tuesday to discuss the future of the species.
The meeting of the regulatory New England Fishery Management Council saw officials discuss the possibility of extinction.
According to them, 2017 marked a year of high mortality and it also coincided with a year of poor reproduction, which left only about 100 breeding female North Atlantic right whales.
A tangled right whale being released near Daytona Beach Photo: NOAA
"We are very concerned about the future of North Atlantic right whales," said Barb Zoodsma, a right whale biologist for NOAA Fisheries, in an NOAA media release in November.
"We lost 16 right whales in U.S. and Canadian waters this year. This is troubling for a population of about 450, particularly because we estimate that only about 105 of those are breeding females who are producing fewer calves.”
The meeting saw a reinforcement of the need to control vessel-strikes and entanglements in fishing gear, seen as a major cause of death in right whales.
Current restrictions include rules on where and how traps, pot gear, and gillnet gear can be set. These restrictions also include seasonal closures, said the report.
This is because the right whales travel more than 1,000 miles from their feeding grounds off Canada and New England to the warm coastal waters of South Carolina, Georgia and Florida's east coast every winter.
A dead whale in Canada found in 2017 Photo: NOAA
Tom Pitchford, the wildlife biologist for the Florida Fish and Wildlife Conservation Commission, said in the report that "any disturbance could affect behaviors critical to the health and survival of the species.”
A study published in the Endangered Species Journal in November said that stress hormone level in right whales is a major cause of death. Spike in stress hormones was seen in both whales that died from are entangled and those that died in swift vessel-strikes.
Even in whales that survived fishing accidents, the stress hormone levels eventually affect their numbers by impacting their ability to reproduce.
"The current status of the right whales is a critical situation, and using our available resources to recover right whales is of high importance and high urgency," said Mark Murray-Brown, an Endangered Species Act consultant with NOAA, in the release.
According to an analysis by the Anderson Cabot Center in the same study, 83 percent of all North Atlantic right whales have been entangled at least once in fishing gear, with more than half of them experiencing more than one entangling.
NOAA Fisheries, the Georgia Department of Natural Resources, the Florida Fish and Wildlife Conservation Commission and the U.S. Coast Guard have issued collective reminders to boaters and coastal residents that North Atlantic right whale birthing season begins in mid-November and runs until mid-April and that boaters keep their vessels at a minimum 1,500 feet distance from the whales.
Vessels 65 feet or longer are required to slow to 10 knots or less in certain areas along the East Coast during this period.
Another study from the New England Aquarium has questioned current conservation efforts and their effectiveness. The paper says that there is no evidence that these regulations are reducing mortality rates of right whales. 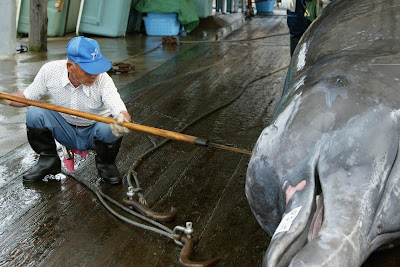 Anti-whaling group Sea Shepherd has announced it will not intercept Japanese vessels in the Southern Ocean this season.
The anti-whaling group's ships have confronted ships off Antarctica each year since 2005.
Sea Shepherd founder Captain Paul Watson said the group could no longer match Japan's surveillance technology.
He accused nations including Australia, New Zealand and the US of being "in league" with Japan. 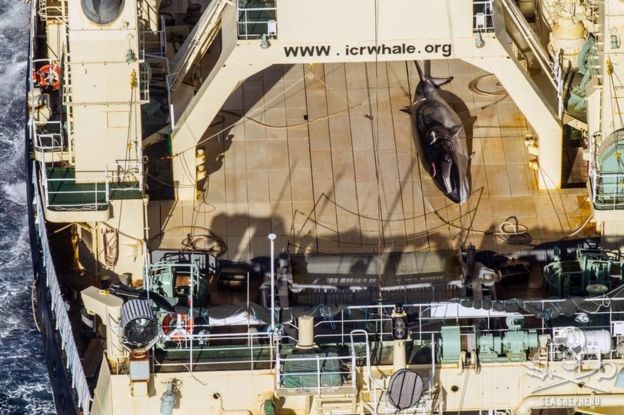 "Japan is now employing military surveillance to watch Sea Shepherd ship movements in real time by satellite and if they know where our ships are at any given moment, they can easily avoid us," Mr. Watson said in a statement.
He told the Australian Broadcasting Corp: "We do not have their money, we do not have their technology. We are going to have to find an alternative way to deal with them and we will."
Mr. Watson did not detail potential future tactics.
Despite an international moratorium on whaling since 1985, Japan's fleet sails to the Antarctic in the autumn or winter each year, returning the following spring.  Mr Watson said the Sea Shepherd was largely responsible for reducing Japan's annual whaling quota from 1,035 in 2005 to 333 at present.

In 2014, Australia successfully won a temporary ban on Japanese whaling in the International Court of Justice (ICJ).
However, Japan resumed whaling a year later, claiming that its fleet had satisfied ICJ requirements about conducting scientific research.
Australia, New Zealand, the US and other nations have maintained public opposition. In January, Australian Environment Minister Josh Frydenberg said he was "deeply disappointed" that Japan had resumed another whaling season.
However, the three nations were accused by Mr. Watson of having "hostile governments" who did not challenge the program in any genuine way.
"We are trying to do the job that Australia, New Zealand, the United States and other nations should be doing, but they are too busy appeasing Japan," he said.
Mr. Frydenberg said: "No country has done more than Australia to try to end Japan's so-called 'scientific' whaling, particularly in the Southern Ocean.
"The Government has made representations at the highest level in Japan and we are working hard through the International Whaling Commission (IWC) to end any commercial or so-called 'scientific' whaling and promote whale conservation."
BBC
Over 5.6 Million Reads Adam Gonzalez at August 30, 2017 No comments:

Thanks to a swift response by the Mexican government, a potentially dangerous confrontation by hostile fisherman towards Sea Shepherd was averted on Thursday March 30.
A temporary restraining order issued against the fisherman on March 28 by the Attorney General’s office was ratified by a judge on April 5th.
Protesting fishermen, led by one of San Felipe’s fishing cooperative leaders, held a demonstration on March 26thwhere they threatened to burn Sea Shepherd ships if they were still in the Gulf by Thursday, March 30th at 14:00 hours.
Sea Shepherd is currently in the Gulf, also known as the Sea of Cortez, for Operation Milagro III to protect the near extinct vaquita porpoise and the endangered totoaba bass. The campaign is in partnership with the government of Mexico.
At the demonstration, the fisherman and their leader took a small local fishing boat, known as a ‘panga,’ painted Sea Shepherd’s name on it, and burned it in the streets of San Felipe. The act served as a warning that they would do the same with the anti-poaching organization’s ships, the M/Y Sam Simon and M/V Farley Mowat, if they did not exit Mexican waters. The demonstration ended with the leader promising to attack the Sea Shepherd crew with 200 pangas on March 30th.
When that date arrived, Mexican Navy vessels acted as escorts for the Sam Simon and the Farley Mowat in case a clash occurred. Meanwhile, on shore police screened fishing boats before allowing them to launch in to the sea.
However, no more than 60 pangas managed to assemble in the harbor, and none set sail towards Sea Shepherd.  No one was hurt on either side and no property damage occurred.

On April 5th,  a Mexican judge ratified a restraining order to the fisherman and their group leader, forbidding them to speak, threaten and harass campaign leader and Sam Simon Captain Oona Layolle and the Sea Shepherd crew aboard the Sam Simon and the Farley Mowat. The fisherman have been ordered not come near the ships and land base.
“Sea Shepherd very much appreciated the effective measures taken by the Mexican government to quell what was potentially a very explosive and violent situation,” said Captain Paul Watson.
Illegal poachers who set the banned gillnets that trap the vaquita, totoaba and other marine animals - are angry that Sea Shepherd is working with their government to remove these nets, and remove the animals caught in them, be they dead or alive.  The totoaba bladders fetch $20,000 a kilo in China, a price that has attracted individuals tied to organized crime and drug smuggling to the trade.
This illegal fishing has caused the vaquita numbers to dwindle down to less than 30, leaving the world’s tiniest porpoise on the brink of extinction. In March, Sea Shepherd found several dead vaquita floating in the Gulf.
The poachers’ animosity toward Sea Shepherd is further intensified because the conservation society uses drones to locate the illegal fisherman and the promptly notifies the Mexican authorities of their coordinates, which has led to arrests.
“Sea Shepherd is not in the area to oppose legal fishing activities,” said Captain Layolle. “Sea Shepherd’s actions are focused on illegal fishing and the only fishermen who have any reason to be angry with the Sea Shepherd ships are those whose illegal activities are being disrupted and shut down by Sea Shepherd crews.