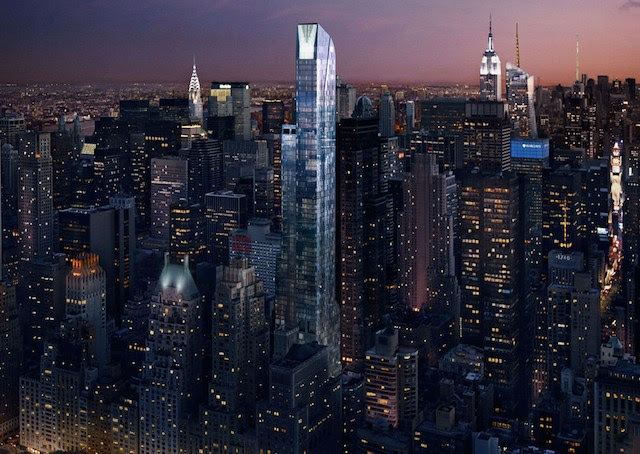 A rendering of One57, a luxury building that received 421-a tax abatements because it subsidized 66 affordable units in the Bronx (via)
No government agency keeps track of how your tax dollars are used to subsidize luxury apartments—job-creating neighborhood-renewers shan't be stifled. But a handy new mapshows you where your investments live, and it's not in a three-bedroom Craigslist share in Bushwick.
The Municipal Art Society had to retrieve data from the Department of Finance, the Department of Housing Preservation and Development, and the Department of City Planning to make the map, which shows that 60% of the $1.1 billion in tax revenue that we forfeited last year under the 421a tax abatement went to building apartments in Manhattan that very few people can actually afford.

Screengrab of the map 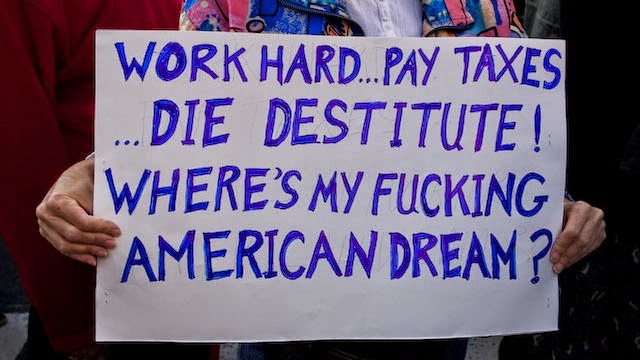 In Manhattan, Long Island City, and large swaths of Brooklyn, the exemption is supposed to require that developers make 20% of their units "affordable," except when lawmakers give them a loophole to ignore or dilute the requirement.
"It's not the 1970s anymore. In these booming Manhattan neighborhoods, the only value of a 421-a program is to spur affordable housing, yet the data on 421-a's affordable housing impact is largely unavailable," MAS' executive director, Margaret Newman, says in a release.
One way of measuring 421a's impact would be to look at how much affordable housing was generated under Mayor Bloomberg: In 2013, 421a helped build 150,000 new apartments; only 12,000 of them were affordable. The city loses 11,000 affordable units to deregulation each year.
Another way would be to look at some of these properties getting the exemption: a few blocks from Bloomberg's apartment, at 150 East 86th Street, developers got $5.8 million in tax exemptions over a decade to build a total of 118 apartments, only 24 of them "affordable" (and those are built off-site).
In the Financial District, 343 Broadway got $4.4 million over 20 years to build 358 apartments, only 18 of them "affordable."
On the Upper West Side, 535 West End Avenue got $3.3 million over 10 years to build 31 apartments, and just six of them are "affordable."
One57, pictured above, got $35 million in tax breaks, including for the $100 million penthouse that recently sold; for that, developers will build 66 "affordable" units in the South Bronx.
Gothamist.com
Contact the author of this article or email tips@gothamist.com with further questions, comments or tips.
Christopher Robbins in News                   A F F O R D A B  L E

Note from the publisher: I looked at over two dozen apartments in the four boroughs(there were none in Staten Island) and found out that out of these 20 to 24 apartments which all had “affordable” apartments advertised by their realtor and a city web site. I did  not qualify for almost all because Im not a couple making 35-45k a year. For those lucky New Yorkers they were going to pay a rent I could afford making a lot less than them and being single. The apartments went from App. $400-$800 rent depending how many bedrooms they had or wether they were a studio. For the sake of argument why a single guy making 15-20K a year because he/she is disabled or a senior on Social Security why couldn’t they get an apartment paying 400-600 a month?,,,because they make too little money yet in many of these cases they are forced to pay up to 75% of their income on rent! What is affordable and for whom? Why a single or couple making 35-45k a year can’t pay$900- $1200 a month for a single or 2 bedroom in any of the boroughs? Yes they could pay it because the one making $16k-19k are paying and eating from pantries.  The one that gets shafted is the one that doesn’t make enough and they put a cap on how much they earn not on how much they can pay, because they could pay the 400-600 rent but restricted from applying g because they are reserved for someone that makes more money so they can pay less rent. The whole deal turned on its head! Only in NY I heard someone said.

But what the landlord does with the blessing of the city and state is rent the apartments, the affordable apartment for as much as they can and then call them affordable so they can get the tax abatement and then rent the rest for $4000K a month making money on both ends plus no tax and just giving people that can afford a little higher a gift apartment which belongs in reality to the one that might become homeless because of lack of money to pay the rent they need to pay and getting no help because at 1500k a month having work all their lives and depending on SS as promised by the government and not qualifying for SSI nor for most government programs, not medicaid , not food stamps because they make too much, they missed on the cheap apartments by NYCHA or some sort of rent control that lets them pay according to their income, like Mitchell Lama and others.

Too little to live and too much to live on.  Could give sample after sample and know the issue well and know that the tax abatements are being paid by those in houses or anyone that works in the city and pay taxes but again hardest hit would be the working poor and all, so the rich landlord does not make plenty of money but good and plenty on the railroad leading to the New Yorkers wallet and at the end we all pay. We pay for the homeless we pay for the rich. Where is the government???? in bed with the construction industry, banks for mortgages and everyone involved with their hand extended out even if they had nothing to do with the deal but know the players so the hand gets extended and greased. No one knows better this type of business as the ex mayor of NY Bloomberg which in fairness to the new mayor, Bloomberg was the godfather of the “affordable” apartment pyramid. We heard him say that word more than Giuliani says 9/11.

Adam Gonzalez
Over 5.6 Million Reads Adam Gonzalez at March 16, 2015 No comments: Links to this post