Stigma is Keeping Delhi Men From Getting Tested for HIV

Over 5.6 Million Reads Adam Gonzalez at January 11, 2019 No comments: Links to this post

Americans Are Getting HV Tested Faster But Not Fast Enough

Over 5.6 Million Reads Adam Gonzalez at November 29, 2017 No comments: Links to this post

In London An HIV Testing Vending Machine at Gay Sauna 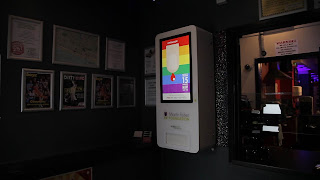 In London, an innovative vending machine for HIV tests being piloted in Britain aims to help in the fight to end the epidemic by encouraging more people to find out whether they have contracted the virus as a first step to seek treatment, a doctor said.

Installed at a gay sauna in the southern seaside city of Brighton, the first-of-its-kind machine distributes free fingerprick self-testing kits that can be collected anonymously and used at home, providing results within minutes.

"(The aim) is to... encourage people who haven't tested so far to test," said doctor Gillian Dean, an HIV specialist at the Martin Fisher Foundation (MFF), the charity behind the project.

A vending machine dispensing free HIV tests is seen at the entrance of the Brighton Sauna in Brighton, Britain, August 10, 2017. Cormac O'Brien / Thomson Reuters Foundation
An estimated 14 percent of the more than 100,000 people living with HIV in Britain have not been diagnosed and are unaware they have the virus, according to government figures.

"If we can get to that 14 percent and get them tested and on treatment then they will essentially become uninfectious and the whole epidemic could then be drawn to a conclusion," Dean told the Thomson Reuters Foundation in an interview at the Brighton Sauna, where the machine was installed in June.

Currently many people are put off tests by the lack of anonymity and restricted working hours of sexual health clinics, MFF said.

A 2016 study of 281 men at the Brighton Sauna showed while about a third had never been tested, 93 percent were prepared to try self-testing or self-sampling, the charity said.

In the first six weeks since the machine was installed, it dispensed more tests than those collected by charity workers at the sauna in the preceding six months, it added.

People living with HIV can take antiretroviral medication to lower the amount of virus in their blood, reducing the risk of transmission to their sexual partners.

Sauna customer Callum Stripp, 18, said heading to a clinic to get tested for the first time was an experience many gay men dreaded due to stigma surrounding the disease and homosexuality.

The kits dispensed by the touchscreen machine allow for more privacy and help reduce anxiety as traditional testing methods can take a few days to arrive, he said.

"You're left waiting and it nags that you might get a bad result. Having such a quick and easy kit eliminates all of that worrying," said Stripp.

The machine is accessible to anyone during the sauna's opening hours and staff have been trained to offer support and advice.Instructions on how to seek help are also included in the kit, which costs significantly less than in-clinic tests
.
Funded by a government grant, the machine, could also be used to collect data for research, Dean said.MFF said it planned to roll out 10 more machines at gay venues across Brighton, which has the second highest prevalence of HIV in Britain after London.

Of 6,095 people in Britain newly diagnosed with HIV in 2015, 54 percent were gay and bisexual men, according to Department of Health data.

by THOMSON REUTERS FOUNDATION
NBC OUT

Over 5.6 Million Reads Adam Gonzalez at August 16, 2017 No comments: Links to this post