Building a more inclusive community for elderly people who identify as lesbian, gay, bisexual or transgender begins with open and sensitive conversations, says Teresa Weybrew, director of marketing and admissions at Christopher Heights Northampton.
In October, the assisted living community on Village Hill Road received an LGBT Cultural Competency Accreditation through SAGECare, an LGBT training program for health care providers for older populations.
The agency, SAGE, has awarded Christopher Heights with its highest rating of platinum, the first in western Massachusetts. Christopher Heights also has assisted living communities in Attleboro, Belchertown, Marlborough, Webster, and Worcester. In Northampton, there are a total of 83 units, some of which are for low-income seniors.
Over the course of a two-day training, nearly all of the 45 members of staff and management at Christopher Heights learned a variety of ways to improve communication with and create a more welcoming space for LGBT residents — whether they are public “out” or not — as well as for residents who have family members who identify as LGBT, Weybrew said.
“We have to tread carefully, but we are doing it very mindfully and very authentically,” Weybrew said. “We want our residents to feel like they can be who they are.”

A 2018 AARP survey of its membership found that more than a third of LGBT seniors were concerned they would have to hide their identity in order to find suitable housing as they age. At least 60% of LGBT seniors said they were concerned about neglect, harassment, and abuse.
“There may be — and must be — gay 80-year-olds elsewhere, and I can bet they are not out,” said Carol Drexler, 88, a resident at Christopher Heights since last July. “And it’s from a lifetime of fear.”
Drexler noted that conversations around sexual orientation and identity are complex for staff and residents to navigate. “The private conversation is probably old, or older, than the public conversation, which is a very risk-taking conversation for those people in this current decade.” 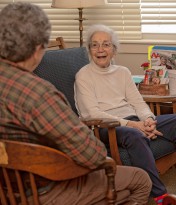 “We are just beginning to get more active, and it will be an educational job here,” said Drexler, who has done gay advocacy work through the University of Massachusetts.
Drexler participated in one of the largest-ever gay rights marches in Washington, D.C., in 1979, an event that drew between 75,000 to 125,000 people.
Throughout the mid-1970s and 1980s, Drexler worked as a counselor for the Everywoman’s Center at UMass (now the Center for Women & Community), where she provided counseling for lesbian women.
“There was nothing for gay people,” before the Everywoman’s Center, Drexler said. “Women began to come from all over, not just for counseling but to be able to talk to someone.”


A 2015 report by the Massachusetts LGBT Aging Commission found that an estimated 65,000 “LGBT older adults” were living in the state at the time.
This past November, the Boston Public Facilities Commission approved a proposal to convert a Hyde Park middle school into a 74-unit complex that will be designated as an LGBT-friendly senior housing facility, the first in New England.
We need allies who said that LGBT residents may have faced discrimination in the past, and the SageCARE training is intended to help staff members create a community where residents can freely express themselves without fear of judgment or discrimination.
“This generation — the average age is 83 (at Christopher Heights) — this particular age group faced major challenges,” Weybrew said. By becoming a more inclusive community, Weybrew said she hopes that residents do not have to hide their sexual orientation as some may have done in the past.
There have been changes at Christopher Heights, big and small, that show sensitivity to its LGBT population. Staff members have begun wearing rainbow flags on their name tags. The organization is rethinking everything from its application form to welcoming letters for new residents to make Christopher Heights inviting to a wide variety of people, according to Weybrew.
Tim Johnston, the senior director of national projects for SAGE, said the training their programming provides is intended to raise awareness for the staff at living communities such as Christopher Heights, especially for those who remained “closeted” as a means to survive.
“It’s about not making assumptions about heterosexuality or cis-gender … and creating the opportunity to come out if they are comfortable,” Johnston said. “One of the most important messages is that we need allies in this. Allies have a huge possibility to help advance this cause for LGBT residents.”
Still, becoming a more inclusive community is a learning process, Weybrew said. Every year, staff members will have to undergo training to retain their accreditation, and Weybrew is developing programming to foster a close LGBT community.
Christopher Heights recently partnered with Rainbow Elders of Greenfield to host a panel with elderly members who are bisexual, gay and transgender to speak about their experiences. They promoted open communication and consistent education, Weybrew said.
For Drexler, the undertaking of making Christopher Heights a more welcoming LGBT community is a continuation of her life’s work.
“It’s the same way as the ’70s and ’80s — it’s a revival,” Drexler said. “It’s a revival with some of the same cast.”
Luis Fieldman can be reached at lfieldman@ gazettenet.com
Over 5Million Reads Adam Gonzalez at January 21, 2020 No comments: Links to this post