Trans medical student Sakris Kupila. Photo via Amnesty.org.uk
The cruel and unusual ‘Trans Act’ remains.
The Finnish government has denied changes to reform the Act on Legal Recognition of the Gender of Transsexuals despite recommendations by the UN Human Rights Council. Finnish law currently requires transgender people to be sterilized before legally changing their gender.
Amnesty UK’s Campaigner Rebecca Dallison told Gay Star News: “Despite strong international pressure, Finland has decided to reject recommendations from the Universal periodic review in the UN Human Rights Council to reform the Trans Act. Not only has the Finnish Government chosen to turn its back on trans people, but it has also failed to provide any justification for this regressive decision.”
GSN also contacted the medical student and trans activist leader Sakris Kupila, a 21-year-old medical student.
“The psychiatric diagnosing process felt like I was handing my dignity, identity, and future over to doctors, nurses and officials that would thoroughly examine me and judge whether or not my sense of self-was real or not,” they said. “The requirement of sterilization is a violation of bodily integrity.”
Kupila ran an Amnesty.org.uk petition that called for changes to trans rights in Finland. The petition closed last Friday with over 16,000 signatures, but Kupila wished it was enough.
“I am disappointed of course, but I am so proud you all stood up with me to give a powerful message to the prime minister, Juha Sipilä: that we’re watching, we will not be ignored and we will not stop fighting for trans rights in Finland.”
Aside from sterilization, trans people need to provide a medical statement certifying they want to permanently belong to the opposite gender and live in that gender role. GSN reports that trans persons must also be medically diagnosed with “transsexualism” and receive extensive mental health screenings.
In April, the European Court of Human Rights ruled forced sterilization was a human rights violation, according to the Windy City Times.

Finland Says 'Not Buying' from Boeing After Trump's Remarks 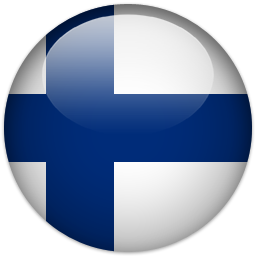 President Sauli Niinisto on Tuesday denied that Finland was buying new fighter jets from American planemaker Boeing, following remarks by U.S. President Donald Trump.
Finland is looking to replace its aging fleet of 62 F/A-18 Hornet jets with multi-role fighter aircraft in a procurement estimated at 7-10 billion euros by 2025.
"One of the things that is happening is you're purchasing large amounts of our great F-18 aircraft from Boeing and it's one of the great planes, the great fighter jets," Trump said on Monday at a news conference with his Finnish counterpart in the White House.
Niinisto, who was standing next to Trump, looked surprised but did not follow up on the comment. He later denied the deal with Boeing on his Twitter account and on Tuesday in Washington.
"It seems that on the sale side, past decisions and hopes about future decisions have mixed ... The purchase is just starting, and that is very clear here," Niinisto told Finnish reporters.
Helsinki is expected to request that European and U.S. plane makers provide quotations for new jets in 2018, with a final decision made in the early 2020s.
A government working group has listed possible candidates as Saab's Jas Gripen, Dassault Aviation’s Rafale, Boeing’s Super Hornet, Lockheed Martin’s F-35 and the Eurofighter, made by Britain, Germany, Italy and Spain.

Reuters
(Reporting by Tuomas Forsell; Editing by Janet Lawrence)
Over 5Million Reads Adam Gonzalez at August 30, 2017 No comments: Links to this post 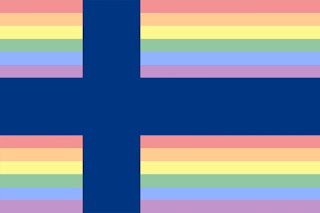 Same-sex marriage is now legal in Finland, the 12th European state to do so, according to Pink News.
Finland has allowed same sex-unions, or partnerships, with restricted rights since 2002; however, the new legislation, which went into effect Wednesday, allows same-sex couples the right to take each other’s surname and adopt children, according to The Huffington Post.

Finnish lawmakers rejected a petition Feb.17 from more than 100,000 people demanding the repeal of the same-sex legislation, according to The New York Times. Petitioners, who claimed registered partnerships were sufficient enough, included members of the far-right populist Finns Party and the Christian Democrats. Despite opposition, the Finnish Parliament voted 120-48 in order to uphold the law.

Some opponents within parliament also argued all children should have the right to a father and mother, a declaration posed by Mika Niikko of the nationalist Finns party during the legislation’s initial approval in 2014, Reuters reported.

“This is a question of the future of our children and the whole society, and such changes should not be made without thorough evaluation of their impact,” Niikko said before the 2014 vote narrowly passed.

The Finnish Parliament originally passed a citizens’ initiative relating to same-sex marriage in 2014, voting 105-92 in favor of the law. At least three bills failed prior to the successful passing of the bill in 2014.

Alexander Stubb, a former member of the European Parliament, said in an open letter before the 2014 vote:
“Finland should strive to become a society where discrimination does not exist, human rights are respected and two adults can marry regardless of their sexual orientation.”

But although the legislation serves as a triumph for marriage equality advocates, there’s a caveat. The Finnish Lutheran church is still divided on the issue, and some old rules concerning marriage between men and women still apply, meaning same-sex couples who wish to be married in a church are left waiting in the wings, according to Business Insider Nordic: News. However, some priests defy the clergy’s opposition, and websites, such as Sateenkaaripapit, or “The Rainbow Priests,” offer a rolodex of priests willing to officiate same-sex weddings.

Over 5Million Reads Adam Gonzalez at March 02, 2017 No comments: Links to this post 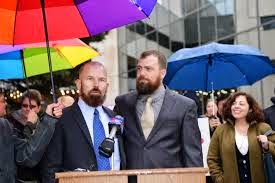 Same-sex couples are set to receive full marriage rights in Finland after the Nordic country’s parliament backed a much-debated legislative proposal on Friday.
The proposal—expected to be enacted into law by the end of 2015—will grant same-sex couples the same marriage and adoption rights as the Finnish law now affords heterosexual couples.
Finland’s 200-seat parliament approved the proposal by 105 votes to 92, capping a period of heated campaigning which clogged the email accounts of parliamentary deputies and aroused strongly voiced commentary from both sides of the argument. 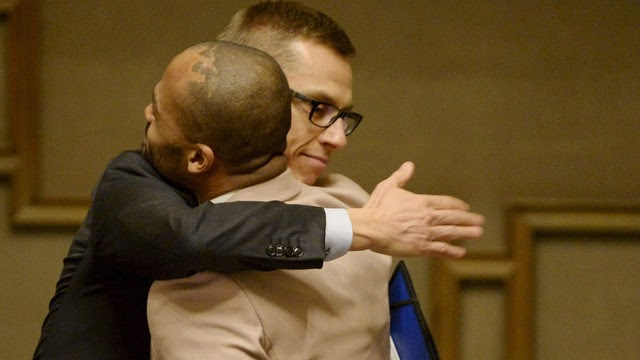 ENLARGE
Finland's Prime Minister Alexander Stubb, left, hugs the country’s first openly gay MP Jani Toivola after the vote. REUTERS
“I am very happy that the parliament has today said ‘I do’ to an equitable marriage law,” Finland’s center-right Prime Minister Alexander Stubb told reporters shortly after the parliamentary vote.
Mr. Stubb has actively supported same-sex marriage and on the eve of the vote he publicly pleaded to members of parliament to vote in favor of the proposal—an unusual move for a sitting prime minister in Finland.
Same-sex couples have been able to register their partnership formally in Finland since 2002 in an arrangement that has granted them many of the same rights and obligations that come with traditional marriage under the Finnish law.
However, Finland has been lagging its Nordic peers and many other Western nations in giving full marriage and adoption rights to same-sex couples.
Mr. Stubb said the proposed new law will now put Finland “on par with the other Nordic countries and Western [nations].”

‘I am very happy that the parliament has today said ‘I do’ to an equitable marriage law.’
—Alexander Stubb, prime minister of Finland

The proposal was put to parliament through a so-called citizens’ initiative. In Finland, if a citizen or a group of citizens gather 50,000 signatures for a legislative proposal, the parliament has to take it up for consideration.
Backers of the proposal came predominantly from urban areas and were younger people and its opponents represented more conservative rural and elderly people.
“I feel great,” said Silvia Modig, a member of parliament who voted for the proposal and represents the Left Alliance party. “Even though I am openly homosexual, this was no personal mission to me. This was foremost an equal protection issue. We are now legalizing and recognizing something that already exists in the society.”
Police estimated that about 6,000 supporters of the proposal had gathered outside Finland’s parliament, erupting in cheers after the vote’s result was announced.
Inside the parliament, Pentti Oinonen, a member of parliament who had voted against the bill, was downcast.
“I am disappointed. This is bad for Finland and bad for our values. I had hoped that in this issue, Finland would have not followed the crowd,” said Mr. Oinonen, who represents the predominantly socially conservative The Finns Party.
online.wsj.com
Juhana Rossi at juhana.rossi@wsj.com
Over 5Million Reads Adam Gonzalez at November 28, 2014 No comments: Links to this post

Homoerotic Stamps Coming Out in Finland 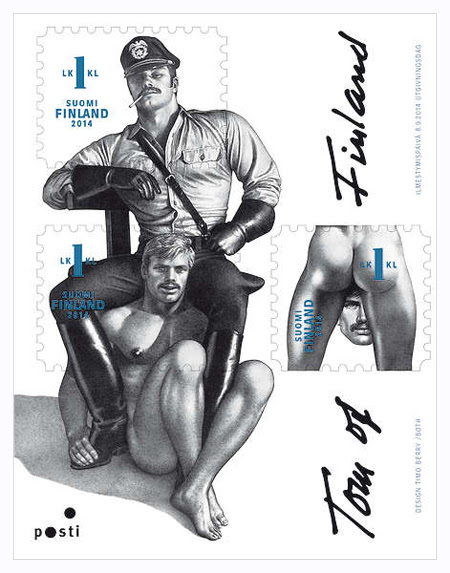 Set to be rolled out between September and October 2014, the three Tom of Finland stamps were unveiled this week by the postal service on its blog, alongside seven additional sets of stamps featuring the works of other prominent Finnish artists.
"His emphatically masculine homoerotic drawings have attained iconic status in their genre and had an influence on, for instance, pop culture and fashion," reads a press release issued by the Itella Posti Oy. "In his works, Tom of Finland utilized the self-irony and humor typical of subcultures." 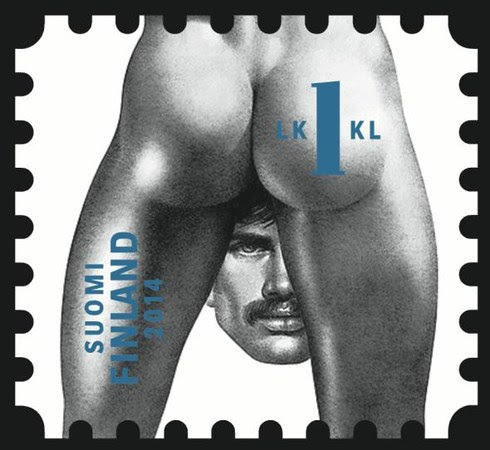 The release, which also hails the artist's work as "confident and proud homoeroticism" goes on to note that the self-adhesive stamps will be launched in conjunction with an art exhibition dedicated to Tom Finland in the Postal Museum.


While Tom of Finland (whose real name was Touko Laaksonen) died in 1991, his work lives on as some of the most iconic and daring of its kind.Within the LGBT and arts communities, he is legendary.
"He created an archive of erotica with a distinct aesthetic – vast-shouldered men in leather, denim and knee-high boots – that is said to have influenced figures including Robert Mapplethorpe, Freddie Mercury and the Village People," writes the Guardian's Kira Chochrane. "[His works] are considerably more erotic than those usually seen on any nation's envelopes."
"His sketches, often explicit, were unapologetic depictions of gay sex and relationships," wrote Soraya Nadia McDonald, similarly, for the Washington Post. "Laaksonen’s subjects were almost always muscle-bound, handsome figures, often bursting out of their clothes. His work, a meditation on masculinity, was also heavy on leather fetish imagery." 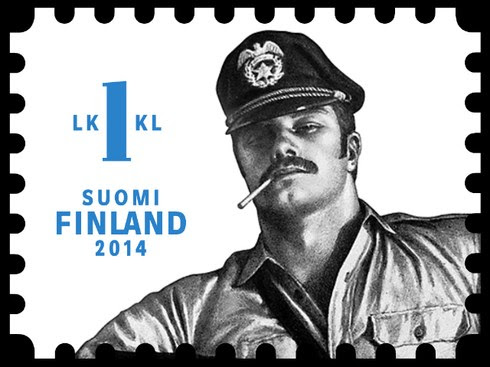 Being one of the most well-known Finnish artists in the world with more than 3,500 drawings to his name, it makes sense that Tom of Finland was chosen for the honor of having his work appear on stamps — and yet, in a country where gay marriage is not yet legal, the fact that his graphic homoerotic works are being celebrated by the post office has come as a surprise to some.

by Lauren O’Neil
http://www.cbc.ca/
Over 5Million Reads Adam Gonzalez at April 16, 2014 No comments: Links to this post