RE: Sheriff's Office Out of Control in Toilets at Volusia County, Florida 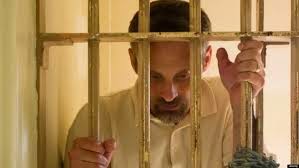 German lawmakers on Thursday approved a plan to annul the convictions of thousands of gay men under a law criminalizing homosexuality that was enforced enthusiastically in post-World War II West Germany.

Parliament's lower house voted unanimously for the bill to cancel convictions under Paragraph 175. Justice Minister Heiko Maas described the annulment as "a late act of justice."

Volker Beck, a lawmaker with the opposition Greens and a longtime campaigner for gay rights, said Thursday was a "historic day."

"It is good that, for many homosexuals, the stigma of being criminal is finally being removed," he told parliament. "It is less good that this won't reach many because they have died in the meantime."

The legislation criminalizing homosexuality was introduced in the 19th century, toughened under Nazi rule and retained in that form even by democratic West Germany, which convicted some 50,000 men between 1949 and 1969. Homosexuality was decriminalized in 1969 but the legislation wasn't taken off the books entirely until 1994.

The new bill foresees compensation of 3,000 euros ($3,340) for each conviction, plus 1,500 euros for every year of jail time that convicted men started. It says at most 5,000 applications for compensation are expected.
In 2000, parliament approved a resolution regretting the fact that Paragraph 175 was retained after the war. Two years later, it annulled the convictions of gay men under Nazi rule but not post-war convictions.

The planned legal rehabilitation will be automatic. It will also apply to men convicted in communist East Germany, which had a milder version of Paragraph 175 and decriminalized homosexuality in 1968.

About 4,300 men are believed to have been convicted there. In all, some 68,300 people were convicted under various forms of Paragraph 175 in both German states before it was scrapped in 1994.

Parliament's upper house still has to clear the legislation.

In addition to individual compensation, the government plans to give an annual 500,000 euros ($557,500) in funding to a foundation that is documenting the stories of men convicted under Paragraph 175.

In October, the British government announced that thousands of men convicted under now-abolished laws outlawing homosexuality would receive posthumous pardons, while those still alive will be eligible to have their criminal records wiped clean.

AP(Source for Germany story)
Over 5Million Reads Adam Gonzalez at June 23, 2017 No comments: Links to this post