Latvia’s foreign minister comes out as gay on Twitter 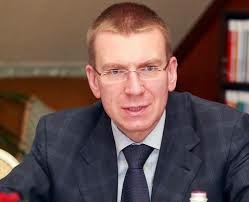 The Latvian foreign minister, Edgars Rinkēvičs, has become the first high-ranking politician in his country and the Baltic states to come out publicly as gay.
In a tweet that has gone viral since he posted it late on Thursday, Rinkēvičs wrote: “I proudly announce I am gay … Good luck all of you.”
Moments earlier he tweeted in Latvian: “Our country must create a legal framework for all types of partnerships, I will fight for it, I know that there will immediately be mega-hysteria but #Proudtobegay.”
Rinkēvičs, 41, had been the subject of whispering campaigns regarding his sexuality, most recently during the runup to October’s parliamentary elections.
His announcement is likely to be contentious in the Baltic country of 2 million people, where events such as gay pride parades attract hundreds of predominantly Christian opponents.
Rinkēvičs was congratulated on Friday by the president of neighbouring Estonia, Toomas Hendrik Ilves.
Latvia is one of three Baltic states including Lithuania and Estonia that joined the EU in 2004 after breaking free from the crumbling Soviet Union in 1990-91
Over 5Million Reads Adam Gonzalez at November 08, 2014 No comments: Links to this post