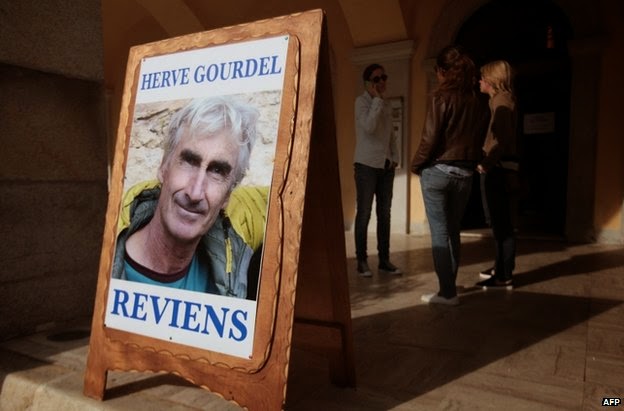 IS itself has beheaded three Western hostages since August: US journalists James Foley and Steven Sotloff, and British aid worker David Haines. Their deaths were all filmed and posted online.
The group has also threatened to kill Alan Henning, a taxi driver from the UK, who was seized while on an aid mission to Syria in December.
On Sunday, it warned it would target Americans and other Western citizens, "especially the spiteful and filthy French".
'Odious ultimatum'

Mr Gourdel worked as a mountain guide in the Mercantour national park north of Nice, his home town.
He had also been organising treks through the Atlas Mountains of Morocco for some 20 years, AFP news agency reports.
The mayor of Nice, Christian Estrosi, said it was difficult to contain the "deep sadness" he felt.
"Today a war was declared on France," he said. "We've been turning a blind eye to what's happening in our back yards. And this is where it has led us."
The BBC's Lucy Williamson in Paris says news of Mr Gourdel's killing has hit France hard.
Our correspondent says that it is the first time that France has lived through the threat and brutality of this kind of killing.
The fact that Mr Groudel was a tourist in a region popular with French holiday-makers has added to the sense of shock, our correspondent says.
In the video posted by his killers, he is shown on his knees with his hands behind his back in front of four masked, armed militants.
He is allowed briefly to express his love for his family before one of the militants reads out a speech in which he denounces the actions of the "French criminal crusaders" against Muslims in Algeria, Mali and Iraq.
The beheading, the spokesman says, is to "avenge the victims in Algeria... and support the caliphate" proclaimed by IS in Iraq and Syria.
Jund al-Khilafa (Soldiers of the Caliphate) pledged allegiance to IS on 14 September.
Until then it had been known as part of al-Qaeda in the Islamic Maghreb (AQIM), which grew out of an Algerian militant group and is now active across North and parts of West Africa.
The group claimed Toulouse gunman Mohamed Merah, a French citizen of Algerian origin, as a member after he killed seven people in south-western France in March 2012, French radio reports.
The militants said that they were responding to the IS call to attack citizens involved in strikes on Iraq and would kill Mr Gourdel unless France ended its military operation.
France’s public position is that it does not negotiate with militant groups but there have been reports of French.
BBC
Over 5.6 Million Reads Adam Gonzalez at September 25, 2014