S.F. Board of Supervisors Scott Wiener Says He Uses Truvada as PrEp


Scott Wiener, a member of the San Francisco Board of Supervisors, made an unusual public announcement on Wednesday: He takes Truvada, a daily antiviral pill, to greatly reduce his risk of contracting H.I.V.

Taking the pills is a practice known as pre-exposure prophylaxis, or PrEP, and some researchers believe it may reduce the risk of infection by 99 percent if patients take their medication daily as prescribed. Approved by the Food and Drug Administration in 2012, PrEP has increasingly been embraced by public health authorities and is one of three planks of Gov. Andrew Cuomo’s plan in New York to sharply cut new H.I.V. infections.

But it carries a stigma in some parts of the gay population, and Mr. Wiener appears to be the first public official to disclose that he’s personally on it.

“A much larger segment of gay men should be taking a close look at PrEP,” Mr. Wiener, who represents the same Castro-based district once held by Harvey Milk, said in an interview on Wednesday. “I hope that my being public about my use of PrEP can help people take a second look at it.” 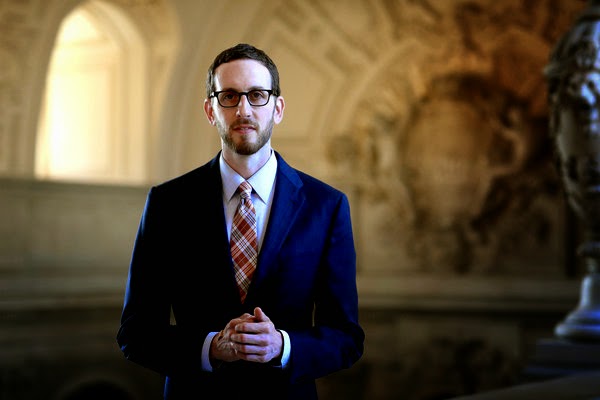 Scott Wiener, a member of the San Francisco Board of Supervisors, at City Hall in San Francisco on Wednesday. He supports a plan to subsidize Truvada for residents of the city regardless of their income. Credit Thor Swift for The New York Times
According to data from the San Francisco Department of Public Health, there were 359 new H.I.V. infections in the city in 2013, 86 percent of them among men who have sex with men. Authorities including the World Health Organization and San Francisco’s health department say they believe that PrEP is a good strategy to cut new infections among gay men.

But PrEP has been slow to catch on. According to data from the city, there were fewer than 1,000 active prescriptions for Truvada as PrEP in San Francisco at the end of 2013.

On Thursday, the board will hold a hearing about increasing that number. David Campos, a supervisor who like Mr. Wiener is openly gay, will introduce a resolution directing the city’s health department to develop a plan by December that “addresses the educational and affordability issues” around Truvada. In particular, he and Mr. Wiener are focused on bringing down costs for people who would like to be on PrEP but can’t afford it.

PrEP is widely covered by health insurers, including Medi-Cal, California’s version of Medicaid. Medi-Cal covers PrEP’s entire cost and many high-quality private plans cover most costs. Mr. Wiener pays just a $15 monthly co-payment under his city-provided health plan. But health plans with high deductibles may leave patients “covered” yet unable to afford their share of the cost of Truvada, whose list price is over $1,000 per month. The price is also forbidding for the uninsured; federally funded programs provide free medication to H.I.V.-positive people without insurance, but they do not cover PrEP.
Washington State adopted one model for addressing that gap. In April, the state’s health department started the PrEP Drug Assistance Program, which pays the entire cost of PrEP for uninsured people, and covers co-payments and deductibles for those who do have coverage. On average, PrEP-DAP is covering $400 a month in out-of-pocket costs for its insured participants, according to David Kern, who oversees the program.

Mr. Campos has cited PrEP-DAP as one possible model for San Francisco, though the exact approach will be determined based on the December report. “We haven’t figured out the specific steps that will be taken or what the program looks like, but we have to start somewhere,” he said. Mr. Campos noted that every prevented H.I.V. infection saves $355,000 in treatment costs, a significant offset to the cost of subsidizing PrEP.

Beyond the financial aspect, wider use of PrEP in San Francisco will require greater public awareness among doctors and patients and a reduction in the stigma that often surrounds Truvada. PrEP has been controversial in the gay population because of its popular association with sex without condoms.

Mr. Wiener is focused on changing that, starting with his own announcement. “I definitely struggled with the decision about whether to be public about this because people will make a lot of assumptions and speculate,” he told me. “But in the end I thought it was very important to be public given the district I represent and the community I represent precisely because we need to remove the stigma from PrEP.”

Email ThisBlogThis!Share to TwitterShare to FacebookShare to Pinterest
Labels: Prep