Investigation Concludes on beating of gay couple in Philly 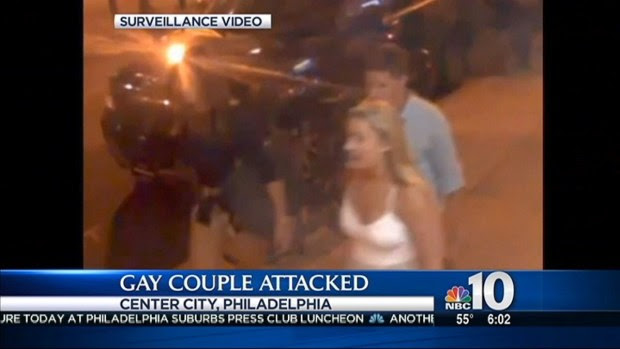 Police released surveillance video they hope will help lead them to the suspects who attacked a gay couple in Center City. NBC10's Monique Braxton reports that police phones have since been flooded with tips.

Police Commissioner Charles H. Ramsey said Monday that the department has concluded its investigation into a Center City assault that left a gay couple seriously injured - and the District Attorney's Office is now reviewing the case.
"We feel that there is sufficient evidence to have charges placed against some of the individuals there," Ramsey said in an interview.
As prosecutors review differing accounts of the Sept. 11 incident, the case has spurred calls for changes to the state's hate-crimes statute, which currently does not cover crimes motivated by sexual orientation.
On Monday, Ramsey also said he supports modifying the state law, which he said “ eeds to change, and change very quickly.”

"There's no statute, unfortunately, that adds sexual orientation to the hate crime statute - which is a shame. There should be. No question about that," he said.

With that the commissioner joined a growing number of legislators who have spurred a renewed push to expand the current law.
State Rep. Brendan Boyle (D., Phila.) - who has twice introduced House bills to expand the hate-crimes law to include sexual orientation, gender and gender identity - has said he hopes outrage over the Center City assault will finally lead to change.
On Tuesday, Boyle and State Sen. Larry Farnese (D., Phila.) will hold a rally at the Capitol Rotunda in Harrisburg for of Senate Bill 42, which would expand Pennsylvania's hate-crime law to include lesbian, gay, bisexual and transgender citizens.
Gubernatorial candidate Tom Wolf and U.S. Rep. Robert Brady have also called for changes to the state law.

Brady on Friday introduced legislation in Congress that would expand the federal hate-crime laws concerning the LGBT community.
Mark Segal, the publisher of the Philadelphia Gay News, said the case has highlighted what many in the gay community have been calling for years.
"I believe the citizens of Pennsylvania are there," he said Monday. "It's only our legislators who are dragging behind."
He said members of the gay community seem resolute in a desire to “ ot allow this case, particularly, to just stay on the vine."

"There is restraint in the community, but that restraint only goes so far," he said.
As calls for action on the law increase, prosecutors are parsing through more than a dozen interviews - some of which include differing accounts of the incident - and video footage.
Police have said that on the evening of Sept. 11, two gay men were assaulted by a group of people near Rittenhouse Square. Both gay men went to the hospital, and one had his jaw wired shut.
Police said the group had made disparaging remarks about the men's sexual orientation.
The gay couple have said that they were attacked after one of them bumped into a member of the group, and another asked whether they were dating.

According to law enforcement sources and others close to the investigation, several members of the group interviewed said the incident began after both sides exchanged words, and that one of the victims first escalated the incident, shoving or becoming physical with a woman in the group.
Ramsey said that investigators had to work through multiple interviews and witness accounts to reconstruct what he called "a brutal assault."
"You've just got a lot of people," Ramsey said. "Trying to sort through it all, as to who may have done what, who may have gotten physically involved - you have to sort through all these things. It takes a little time to do that."
Segal said that the department's efforts to apprise the gay community of the progress of the investigation have, to some extent, "eased the pain" the community feels.
“But there is anger out there," he said, "and I think that anger will only be answered by charges."