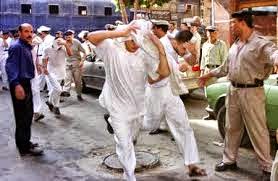 The eight Egyptian men detained on accusations of "debauchery" for appearing in an online video of a gay wedding on a Nile party boat are set to be tried by a misdemeanour court, after prosecutors referred them to trial on Monday.

The defendants have been detained since early September as per an order from Egypt's prosecutor-general to investigate charges of debauchery and spreading acts that violate public decency.
The investigations identified nine men who appear in the video as well as the boat's location and the person who shot the footage.
Prosecutor-General Hisham Barakat watched the video and confirmed that the footage was of two men getting married, a statement from the prosecution said.
Egypt's forensics authority had announced earlier this month that the defendants had undergone physical inspections and were found to be "not gay".
Human Rights Watch condemned news of the forced inspections, saying that they "violate international standards against torture".
Consensual same-sex relations are not explicitly prohibited in Egypt, but other laws have been used to imprison gay men in recent years, including "debauchery" or "shameless public acts."
A man who said he was one of those who appeared in the video denied the allegations in an interview with privately-owned Rotana Masriya TV channel in early September.
He said he was holding a birthday party for his friend and got him a silver ring as a present because it was something he wanted.
In April, four men were convicted and sentenced to eight years in prison for debauchery after holding parties involving homosexual acts and women's clothing and makeup.
In 2001, Egypt grabbed the world's attention when 52 men were arrested in a police raid on a Nile boat restaurant and accused of taking part in a gay sex party.
After a highly publicised trial in an emergency state security court, 23 of the men were convicted and sentenced to prison terms of one to five years for immoral behavior and contempt of religion.