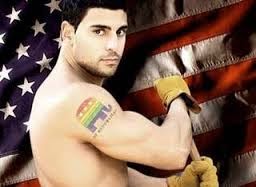 In March, the Pew Research Center published a poll showing that 61 percent of “young” Republicans — those between the ages of 18 and 29 — were in favor of same-sex marriage. Compared to young Democrats, Republican support was modest; a difference of 16 percentage points. Still, overall, the difference in public opinion was extreme, with 39 percent supporting same-sex marriage on the right and 69 percent on the left (independents fell somewhere in the middle, with 54 percent support across age groups).
The poll concluded that younger conservatives are generally far more supportive of LGBT rights compared to older generations. And there’s certainly an age gap across parties, as well. Younger Democrats and independents showed considerably stronger support for marriage equality than older respondents.
This means that the coming generation is far more likely to be LGBT friendly, and it may only be a matter of time until the majority opinion is supportive of equal rights — even if that means a long wait. Currently, though, the poll shows an engrained prejudice in the age groups that are in power right now: Not many 18- to 29-year-olds hold seats in the Senate.

Many may have experience with this sort of generational gap. Imagine having a conversation with an older man or woman, perfectly pleasant, when suddenly, the chat is marked by a painfully racist, offhand comment — that can pretty much end the conversation right there. Casual homophobia can create similar moments of shock among youth, who may be more accustomed to hearing about gay rights in popular culture. Contrary to widely held opinion, it seems that people actually can change their views.
A separate poll from Pew quantifies what might otherwise sound like a foolish hope. A poll published last year showed 49 percent of respondents to be in favor of same-sex marriage, with 44 percent opposing it. This year, the overall number across party and age supporting same-sex marriage increased to 54 percent, and opposition decreased to 39 percent.
But what’s most interesting about the 2013 numbers is the section on those who self-report having changed their minds. A negligible 2 percent of the 44 percent opposition changed sides in a stance against gay marriage. A more significant portion, 14 percent, changed their minds in favor of same-sex marriage. That’s 28 percent of the total support group for gay marriage.

The GOP and coming out

One GOP spokesman, James Richardson, came out recently via an article in The Washington Post. He discussed his party membership and his struggle as one of the many who would like to get married but is denied the rights marriage offers. He addressed his party membership and conservative values, saying, “gay couples don’t want to rock the marriage boat — they only want a ticket for two to ride.”
He also discussed, among many things, the fact that public opinion is changing, and not just because of millennials. “Nearly one-third of these belated boosters (in favor of equal marriage) say they were won over through personal encounters with gay family members or friends,” said Richardson. “So the potential reward of convincing even one dubious neighbor is greater than the assumed risk of a diminished social orbit. And it’s okay if I alienate a Facebook friend or two.”

Changes for Hillary and Obama

Richardson is not the only one in the political sphere to recognize the need for entrenched opinions to change. Politicians have seen the ebb and flow of public opinion and personal opinion alike — though whether the two go hand-in-hand is hard to pin down at times. Hillary Clinton is a good example. Anyone who listened to Clinton’s NPR interview in June likely remembers the tense conversation between her and Terry Gross on same-sex marriage — specifically, about when and why Clinton openly stated her support for gay marriage. Age and her generation came up, as did the concept of gradually changing one’s opinion.
“I did not grow up ever imagining gay marriage, and I don’t think you probably did either. This was an incredibly new and important idea that people on the front lines of the gay rights movement began to talk about and slowly, but surely, convinced others of the rightness of that position,” said Clinton. “And when I was ready to say what I aid, I said it.”
She’s not the only politician to have made slow adjustments — both publicly and quite probably privately — concerning a stance on gay marriage. Even President Obama’s opinion on same-sex marriage has shifted a great deal over his time in the spotlight. At first he was against it, then he was pro-civil unions, and finally, he changed to full-blown support of same-sex marriage. But the change wasn’t immediate, and he’s hardly between the ages of 18 and 29 — just look at that hair if you need proof (sorry, Obama).
Anthea Mitchell on Twitter @AntheaWSCS
http://wallstcheatsheet.com
Over 5.6 Million Reads Adam Gonzalez at September 29, 2014