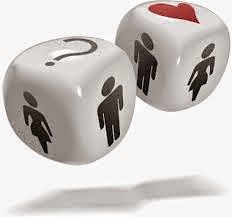 (about 42 million people) had never been married,according to a new Pew Research Center analysis of census data. In 1960, only about one-in-ten adults (9%) in that age range had never been married.1 Men are more likely than women to have never been married (23% vs. 17% in 2012). And this gender gap has widened since 1960, when 10% of men ages 25 and older and 8% of women of the same age had never married.
The dramatic rise in the share of never-married adults and the emerging gender gap are related to a variety of factors. Adults are marrying later in life, and the shares of adults cohabiting and raising children outside of marriage have increased significantly. The median age at first marriage is now 27 for women and 29 for men, up from 20 for women and 23 for men in 1960.2 About a quarter (24%) of never-married young adults ages 25 to 34 are living with a partner, according to Pew Research analysis of Current Population Survey data.3

What Never-Married Adults Are Looking For in a (Potential) Spouse

A new Pew Research survey finds that abouthalf of all never-married adults (53%) say they would like to marry eventually. This share is down somewhat from 2010, when 61% of never-married adults said they would like to marry someday. Roughly one-third of today’s never-married adults (32%) say they are not sure if they would like to get married, while 13% say they do not want to marry.5
But the survey also finds that, among the never married, men and women are looking for distinctly different qualities in a potential mate. Never-married women place a great deal of importance on finding someone who has a steady job—fully 78% say this would be very important to them in choosing a spouse or partner. For never-married men, someone who shares their ideas about raising children is more important in choosing a spouse than someone who has a steady job.
Never-married adults—whether male or female—place a much lower priority on finding a partner who shares their moral and religious beliefs, has a similar educational pedigree or comes from the same racial or ethnic background.
Among those who have never been married but say they may eventually like to wed, three-in-ten say the main reason they are not married is that they have not found someone who has what they are looking for in a spouse. Nearly as many (27%) say they are not financially prepared for marriage, and 22% say they are too young or not ready to settle down. There are no significant differences between never-married men and women in this regard.

As the share of never-married adults has climbed, the economic circumstances faced by both men and women have changed considerably. Labor force participation among men—particularly young men—has fallen significantly over the past several decades. In 1960, 93% of men ages 25 to 34 were in the labor force; by 2012 that share had fallen to 82%. And among young men who are employed, wages have fallen over the past few decades. For men ages 25 to 34, median hourly wages have declined 20% since 1980 (after adjusting for inflation). Over the same period, the wage gap between men and women has narrowed. In 2012, among workers ages 25 to 34, women’s hourly earnings were 93% those of men. In 1980, the ratio was less than 70%.6
The new Pew Research survey findings suggest that never-married women place a high premium on finding a spouse with a steady job. However, the changes in the labor market have contributed to a shrinking pool of available employed young men.
Among never-married adults ages 25 to 34, the number of employed men per 100 women dropped from 139 in 1960 to 91 in 2012, despite the fact that men in this age group outnumber young women in absolute numbers. In other words, if all never-married young women in 2012 wanted to find a young employed man who had also never been married, 9% of them would fail, simply because there are not enough men in the target group. Five decades ago, never-married young women had a much larger pool of potential spouses from which to choose.7
Despite the survey finding that few Americans say it is very important to them to find someone of the same racial or ethnic background to marry, the vast majority of new marriages (85%) take place between people of the same race and ethnicity.8 The pool of employed men has shrunk for both black and white young adults since 1960, but the decline has been more pronounced among blacks.
It is important to note that never-married young adults are not necessarily restricting their choice of a potential spouse to those who have never been married, nor are they limited to a spouse within their age group. Among all unmarried adults ages 25 to 34 in 2012, 15% have been divorced, separated or widowed, and these men and women are potentially in the marriage market as well.
The relationship between education and marital status has changed considerably over time, and the patterns among men and women have reversed. In 1960, men of various education levels were about equally likely to have never been married. Today, there is considerable disparity in the shares of never-married men along educational lines. Men with a high school education or less are much more likely than men with advanced degrees to have never married (25% vs. 14%).
BY WENDY WANG AND KIM PARKER
http://www.pewsocialtrends.org
Over 5Million Reads Adam Gonzalez at September 30, 2014

Email ThisBlogThis!Share to TwitterShare to FacebookShare to Pinterest
Labels: Dating