Remember this ugly face??She now fights a dead Vet from having his marriage recognized 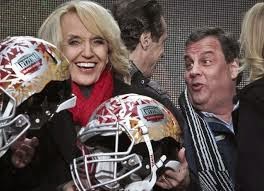 UPDATE:
A federal judge issued an emergency order requiring Arizona to recognize the California marriage of Green Valley couple Fred McQuire and George Martinez., according to theArizona Republic. Martinez died of pancreatic cancer last month.
ORIGINAL POST:
I know how much marriage-equality opponents hate to be called bigots, so I won’t do that. But in the case of George Martinez, Arizona officials battling recognizing his marriage and 45-year relationship with Fred McQuire are just being a bunch of pricks.
Martinez’s final wish, as he battled cancer, was to marry his partner of forty-five years, Fred McQuire. Martinez passed away two weeks ago leaving McQuire a legal battle in their home state over Arizona’s ban on gay marriage. The state is not allowing McQuire to list himself as the spouse of Martinez’s death certificate, putting funeral plans on hold for Martinez who is a Vietnam War veteran.
A judge will hear arguments today over whether McQuire’s marriage in July to Martinez in the state of California, is valid in Arizona. U.S. District Judge John Sedwick also will consider McQuire’s request to allow a death certificate that identifies McQuire as the surviving spouse.
— David Taffet


U.S. District Judge John Sedwick quickly handed a victory Friday to a gay man who lost his spouse to cancer last month and was denied death benefits because Arizona does not recognize same-sex marriage. Sedwick said that Fred McQuire should be granted his request to have his name listed on his husband George Martinez's death certificate. Here are questions and answers about the ruling:
WHAT WAS AT ISSUE IN FRIDAY'S HEARING?
McQuire of Green Valley, Arizona, was barred by his home state from listing himself as a spouse on his husband's death certificate because his same-sex marriage with Martinez in California isn't recognized in Arizona. That has placed McQuire in limbo, unable to receive any death benefits from the federal government and putting on hold plans to cremate the body.
WHAT DID THE JUDGE RULE?
Sedwick ruled that McQuire demonstrated that he faced irreparable harm on the basis of the loss of his dignity and status while he was the midst of his grief. Sedwick allowed McQuire to be listed as Martinez's spouse on the death certificate. Without ruling on the larger issues of whether Arizona's ban on gay marriage is unconstitutional, the judge said the state's argument that its marriage laws don't discriminate on the basis of sexual orientation lacks merit, pointing out the reason same-sex couples don't marry is because of their sexual orientation.
Sedwick sided with the state, however, in ruling that McQuire hadn't shown irreparable harm based on the financial consequences of not having his marriage recognized in Arizona, ruling that McQuire will not be able to succeed in getting Social Security and Veterans Affairs benefits.
WILL THE RULING HAVE BROADER IMPLICATIONS?
The ruling Friday was narrowly focused on the question of whether McQuire can obtain death benefits. But Ohio has a similar ongoing case: Two gay men whose spouses were dying sued to win the right to be listed as the surviving spouses on their husbands' death certificates and for their spouses to be listed as having been married.
IS THIS CASE PART OF A LARGER EFFORT TO OVERTURN ARIZONA'S BAN ON GAY MARRIAGE?
Yes. The request from McQuire and Martinez was made as part of a lawsuit in which 19 people are challenging Arizona's ban on same-sex marriages. The lawsuit alleges that the ban violates the equal-protection and due-process guarantees in the U.S. Constitution. But the federal court hearing Friday was limited to only McQuire's requests. Still, Sedwick wrote that the state's argument that its marriage laws don't discriminate on the basis of sexual orientation lacks merit. Sedwick is also hearing the broader challenge to the constitutionality of Arizona's ban.
Over 5Million Reads Adam Gonzalez at September 13, 2014