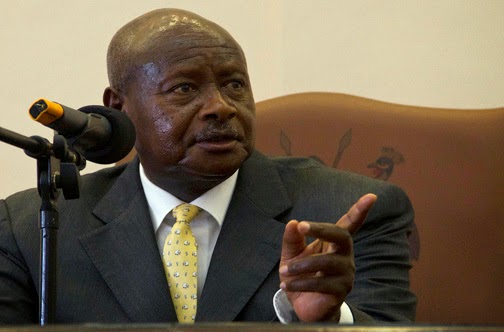 After a post appeared in Dallas Voice’s Instant Tea blog on Wednesday, Sept. 17, the Four Seasons Hotel in Irving canceled Ugandan President Yoweri Museveni’s accommodations. Museveni has pushed for the so-called “kill the gays” bill in his country.
The Irving Convention Center and Irving police are also concerned about the controversial head-of-state’s visit. Museveni is supposed to attend a religious service at 10 a.m. and speak to potential investors at 5 p.m. on Sunday, Sept. 21 at the Irving Convention Center.
Museveni is currently negotiating with the Gaylord Texan Resort and Convention Center in Grapevine to host his stay. No word yet whether that hotel will accommodate him or how Grapevine police plan to protect him with little notice.
In Boston, Gay and Lesbian Advocates and Defenders announced Ugandan gay activist John “Longjones” Abdallah Wambere was granted asylum in the U.S.
According to GLAD, Wambere was “outed as gay by newspapers, harassed by strangers, received death threats by anonymous phone calls, arrested, evicted from his home and beaten up.”
Under the “kill the gays” law, Wambere would face life imprisonment and he faces the threat of arrest should he return to Uganda.
ALSO:
Diana Pfaff of the Irving Convention Center has notified Dallas Voice that the Ugandan Embassy had until the close of business today to get all paperwork back to them. Because embassy officials did not meet that deadline, the event featuring Ugandan dictator Yoweri Museveni will not take place Sunday in Irving as originally planned.
Earlier today, the Four Seasons Hotel in Irving canceled Museveni’s reservation and the Marriotts put the gay back in Gaylord hotel by refusing to accommodate him either.
David Taffet
dallasvoice.com