Daniel Mark Ogloff has been teaching at a school in southern Alberta since January. (kyokushin.ca)
A Langley, B.C., teacher, who was suspended for writing "I'm gay" on a piece of masking tape and sticking it on the back of a student's jacket last year received a second suspension this month.

Daniel Mark Ogloff,  a metalwork teacher at Aldergrove Community Secondary School, was first suspended for 10 weeks in November 2013 by the school district for the homophobic prank on the male Grade 11 student.
On Sept. 10 this year, he received a second two-week suspension from the B.C. Commissioner for Teacher Regulation, according to documents that were recently released. That suspension ends early in October.
Grade 10 student Cameron Snow says he was in his class Sept, 24, 2013, when the incident happened.
"Mr. Ogloff,  just as a joke, came up and stuck a sticker on him that said, 'I'm gay, LOL.'  We didn't think anything of it.  No one did because we always mess around with the teacher and he messes back. He's friendly," said Snow. 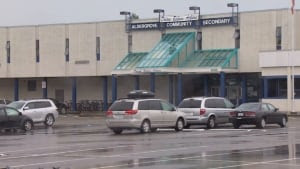 Aldergrove Community Secondary School in Langley, B.C., is where Daniel Mark Ogloff played a prank on a student that led to the teacher being suspended twice. Ogloff stuck a piece of masking tape reading 'I'm gay' on the back of the student's jacket. (CBC)
But Snow recalls students were pointing, laughing and taking pictures of the student, who was clearly upset.
"He took it to offence, walked out of the room, told the principal ... and then the next day we came to school and Mr. Ogloff wasn't there."
Ogloff later described the incident to officials as "horseplay."
But the school district disagreed and suspended Ogloff from work without pay for 10 weeks, beginning last November, for acting unprofessionally and disrespectfully.
When he returned to work, he met with the offended student and took some mandatory courses.
The B.C. Commissioner of Teacher Regulation then suspended his teaching certificate, effective Sept. 22 to Oct. 5.
LGBT advocates, such as Dara Parker, executive director of QMunity, say they are stunned a teacher would have done something like this.
"This is just an affirmation that, despite all of the progress that we've made and all of the legal equalities we've achieved, that the day-to-day lived equalities are still not there," said Parker.
"This teacher thought it was acceptable to put a sign that says 'I'm gay' on a student's back. And that's completely wrong."
Martin Rooney, the founder of Out in Surrey, agrees.
"In this day and age, with all of the conversation regarding gay and lesbian issues in school, and with the transgender issue being forefront, it surprises me there's not a sensitivity," said Rooney.
Nevertheless Snow says he wants Ogloff to return to the classroom.
"I learned all of my welding skills from him. I'm pretty good at it now. I'm already starting to get a job somewhere from welding."
Ogloff has been disciplined before.
In 2011, he received a warning for making inappropriate comments to Grade 7 students.
The Langley School District and the B.C. College of Teachers did not return CBC’s calls for comments.
CBC News
Over 5Million Reads Adam Gonzalez at September 27, 2014

Email ThisBlogThis!Share to TwitterShare to FacebookShare to Pinterest
Labels: Homophobia in Schools