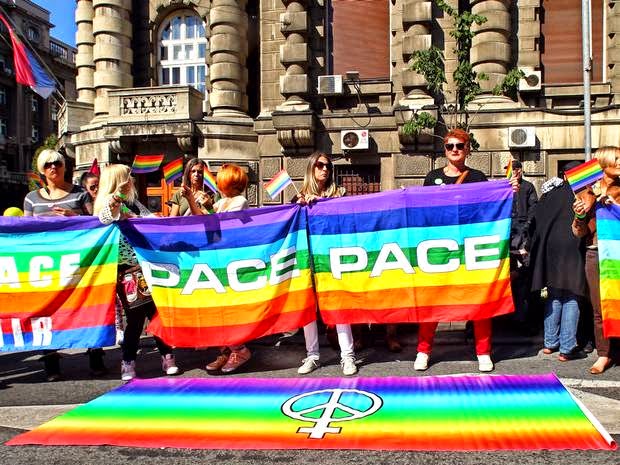 Social media—legitimately praised as democratic mobilizing tools in the Arab world—now are being used for major civil rights violations in Egypt. Authorities have taken to scouring the internet and social media in their crackdown on the country’s LGBT community. Six men were sentenced to two years in prison for advertising their apartment on Facebook as a place for men to engage in sexual acts; they were allegedly charging around $200 a night. This follows another recent high-profile case, in which eight men were put on trial for appearing in a YouTube video purportedly showing Egypt’s “first gay marriage,” on a small boat on the Nile.

Egyptian officials told BuzzFeed they are closely monitoring some social-media sites. While sexual relations between consenting same-sex adults (in private) are not illegal (pdf) in Egypt, other laws have recently been used to imprison gay men. The defendants in the video trial, for instance, were arrested for “inciting debauchery.”
As a result of the regime’s online snooping, Grindr, a smartphone hookup app, has issued a warning to all of its Egyptian users.

The LGBT community in Egypt has launched a Twitter campaignagainst the crackdown, with the hashtag #stopgjailinggays and #ضد_حبس_المثليين.
According to the ILGA state-sponsored homophobia report (pdf), only three (Jordan, Djibouti, and Bahrain) of the 22 countries of the Arab League deem homosexual acts legal. The rest categorize homosexual acts as illegal, and five (Mauritania, Saudi Arabia, Sudan, Yemen, and parts of southern Somalia) punish them by death. In Iraq and the Gaza strip, matters are unclear as the penal codes have been undergoing multiple overhauls.

Human Rights Watch condemned Egyptian courts (pdf) for putting the eight men involved in the wedding video under medical examinations to “detect” homosexuality. Moreover, it is not uncommon for families to throw a gay son out of the house or send him to a psychiatrist for “fixing.”
A crackdown is underway across the region. A man in Saudi Arabia was sentenced to 450 lashes and three years in jail for for allegedly being gay and tweeting about it. In Lebanon, where the thriving nightlife makes it easy to forget the illegality of gay acts, LGBT rights have been taking a step backward. Twenty-seven men were arrested at a public, Turkish-style bath for allegedly seeking “sexual encounters with other men.” That was followed by additional arrests targeting another public bath and a private home. As a result, Lebanese gay rights organizationshave been working to annul the penal code that has been used to target gay people. The crackdowns also extend to gender identity. Dubai, which prides itself in being the least conservative of Arab cities, jailed two men for wearing women’s clothes.

There’s little sign of relief. This past week, the UAE, Saudi Arabia, Algeria, Kuwait, and Morocco voted against a United Nations Human Rights Council resolution against LGBT violence and discrimination.

But, rather than being a peripheral issue, LGBT rights are an important test of—and component of—any transition by Mideast regimes toward more progressive, less-controlling government. Brian Whitaker of Foreign Policy writes:
Attitudes towards gay rights are [...] an important measure of how far, or not, a society has moved from authoritarianism. Gay rights in the Middle East are not simply about gay people; they are intimately bound up with questions of personal liberty, the proper role of governments, and the influence of religion. Demands for gay rights add to the broader pressure for change and, conversely, progress in these other areas can ease the path towards gay rights.