It makes so much sense that Trump's defender in the Committee collecting evidence for a possible Trump impeachment, who yells about the law, unfairness, etc. is himself involved on disgusting allegations with a Doctor Richard Strauss who is in Jail now (A professional referee says in a lawsuit filed Thursday that disgraced doctor Richard Strauss masturbated in front of him in a shower after a wrestling match at Ohio State University, and that he reported the encounter directly to Rep. Jim Jordan, R-Ohio, who was then the assistant coach). To me, this Congressman with a salty tongue belongs to the man he is a defender to and who does not want to see him impeached.
Adam Gonzalez 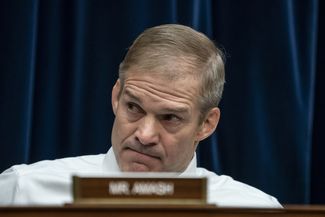 By Tim Marcin/ Vice and NBC
A wrestling referee alleges in a lawsuit that when he told Rep. Jim Jordan (R-Ohio) that now-disgraced Ohio State doctor Richard Strauss masturbated in front of him in a shower, Jordan did nothing.
The pro referee is identified only as John Doe in court documents, reported NBC News on Thursday. In 1994, when Jordan was an assistant coach on Ohio State’s wrestling team, the ref alleges, Strauss performed the sex act in front of him in a shower after he worked a match.
John Doe says Jordan shrugged it off.
“Yeah, that’s Strauss,” Jordan and then-head coach Russ Hellickson told Doe, according to the lawsuit.
Jordan — an extreme loyalist to President Donald Trump — has taken on an increasingly prominent role within the GOP amid the impeachment inquiry. Republicans are considering adding him to the Intelligence Committee days before public impeachment hearings are scheduled to begin, the Los Angeles Times reported Thursday.
READ: Nearly 1,500 accusations of sexual assault filed against OSU doctor
Jordan has repeatedly denied that he knew about the abuse carried out by Strauss. The longtime Ohio State doctor — who died by suicide in 2005 — abused at least 177 male students, according to a report from the university released in May. But the referee alleges it was an open secret.
“It was common knowledge what Strauss was doing, so the attitude was it is what it is,” he told NBC News. “I wish Jim, and Russ, too, would stand up and do the right thing and admit they knew what Strauss was doing, because everybody knew what he was doing to the wrestlers. What was a shock to me is that Strauss tried to do that to me. He was breaking new ground by going after a ref.”
Former Ohio State wrestler Dunyasha Yetts was the first to state publicly that he told Jordan about Strauss’ behavior. Yetts said he told his coaches that when he went to see Strauss for a thumb injury, the doctor pulled the wrestler’s pants down.  “It’s good that people are starting to come forward and say the truth, which is that Jordan and the other coaches knew what was going on and they blew it off,” Yetts told NBC News.
Jordan claimed vindication when the report from Ohio State found no hard evidence he knew about the abuse.
“It confirms everything I said,” he told reporters at the time. “If we’d have known about it, we’d have reported it.”
But the report did find that many in Ohio State acknowledged rumors of abuse were rampant and that Strauss went out of his way to shower with wrestlers. And team members who competed for Jordan in the ‘80s and ‘90s continued to say the former coach knew about Strauss’ behavior, the New York Times reported.
Cover: Rep. Jim Jordan, R-Ohio, left, and, Rep. Scott Perry, R-Pa., right, speak to reporters on Capitol Hill in Washington, Wednesday, Nov. 6, 2019, near the area where the interviews for the impeachment inquiry are being held. (AP Photo/Susan Walsh)
Over 5.6 Million Reads Adam Gonzalez at November 10, 2019