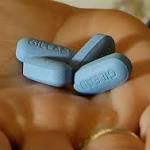 Hot take, but PrEP—that is, preexposure prophylaxis, a once-daily FDA-approved drug sold under the brand name Truvada that reduces the risk of HIV transmission among HIV-negative individuals by 99% when taken daily—should be as readily available as condoms at a gay bar. Just pour a bunch of those little blue babies into a fishbowl—or, better yet, put ‘em in one of those big, round, bubble-shaped gumball machines they have at supermarkets and the Chinese takeout place down the street from my apartment, except that instead of having to put in a quarter to get a week’s worth of pills, you don’t put in any money because it’s free.
No one likes Mike & Ikes anyway, those goddamn candy queer baiters. PrEP for breakfast! Gay utopia now! Or at least make it available over the counter…for free…and coupled with a complimentary seltzer, while we’re at it. Definitely don’t make it $2,000 out of pocket, which Truvada manufacturer Gilead has the absolute, unnerving gall to charge. Researchers at the Centers for Disease Control and Prevention have found that Black and Latino men who have sex with men are significantly less likely to be aware of PrEP, to have discussed PrEP with their health care providers, or to have taken PrEP in the last year compared to their white counterparts.
You might think that these stats have something to do with insurance coverage or health care access, but the researchers say that neither of those two variables was a factor. Apparently, it has more to do with how Black and Latino men who have sex with men—a clinical term that includes, but isn’t limited to, gay, bisexual, and queer men and sometimes trans people assigned male at birth (I reached out to the CDC for clarification on that last one, and I’ll update if I hear back)—are less likely to discuss PrEP with their providers in the first place, perhaps due to stigma or maybe thanks to structural racism within health care and how it might influence their providers’ decision to bring it up in the first place.
Again, it feels disingenuous to talk about who does or doesn’t know about PrEP without repeating that Gilead charges upwards of $2,000 out of pocket for a one month supply of Truvada. A lot of private insurance companies and even Medicaid, in some states, cover that cost, but still—that’s astronomical! Black and Latino men who have sex with men are already at disproportionately high risk for HIV transmission; more than 40 percent of all people diagnosed with HIV in 2017 were Black, while just over a quarter of them were Latinx. So, why not remove some of the barriers by... literally removing some of the barriers, such as cost? Abolish the entire profit-driven health care system we’ve got going on in the U.S. and replace it with, I don’t know, everything’s free fishbowl at the gay bar idea has to be better than what we currently have, right?

Email ThisBlogThis!Share to TwitterShare to FacebookShare to Pinterest
Labels: Prep