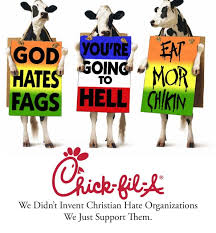 Bisnow reported yesterday Nov.18, 2019 about the change of heart of this anti-gay company. There have been press releases in the past about Chick-fil-A giving money to some pro-LGBT organization but their wallet was kept open to people which for their own reasons can't stand the LGBT Community. It's a good thing if this company would sincerely study the issue and find out why so-called anti-gay religious outfits are that way. It can't be for following any dogma or commandments from Christ if they are Christians and Jehova if they are not. It would be a better thing if they worry about chicken and leave issues of religion to the churches and temples.


Please take this posting with a grain of black pepper until we get more clarification on a change of policy from this company who has helped those that travel to Africa to help the governments enact laws that we call "Death to the Gays" because they are jailing us and killing us.
Adam Gonzalez

As Chick-fil-A expands globally and into more liberal parts of the U.S., the chicken chain plans to change which charities it donates to after years of bad press and protests from the LGBT community.  Beginning next year, Chick-fil-A will move away from its current philanthropic structure, Bisnow has learned. After donating to more than 300 charitable organizations this year, the Atlanta-based fast-food chain will instead focus on three initiatives with one accompanying charity each: education, homelessness, and hunger.  “There’s no question we know that, as we go into new markets, we need to be clear about who we are,” Chick-fil-A President and Chief Operating Officer Tim Tassopoulos said in an interview with Bisnow. “There are lots of articles and newscasts about Chick-fil-A, and we thought we needed to be clear about our message.”

The new initiative will no longer include donating to organizations like the Salvation Army, the Fellowship of Christian Athletes and the Paul Anderson Youth Home, Chick-fil-A says, all of which sparked criticism in the past from the LGBT community due to the organizations’ stances on homosexuality.

The move comes after several U.S. airports rejected the company from concessions deals earlier this year. More recently, the landlord of the first Chick-fil-A in the U.K. announced eight days into its lease the pop-up venue would not be welcome to extend — all because of the company’s perceived anti-LGBT stance.

The company is also months from opening its first location in Boston, where the late Mayor Thomas Menino pledged to ban the company from opening within city limits after Chick-fil-A CEO Dan Cathy voiced his opposition to gay marriage in 2012.  Starting next year, the Chick-fil-A Foundation plans to give $9M to organizations like Junior Achievement USA to support education, Covenant House International to fight homelessness and community food banks for its hunger initiative in each city where the chain operates.

The company intends to dedicate $25K to a local food bank each time it opens a new location.  “This provides more focus and more clarity,” Tassopoulos said. “We think [education, hunger, and homelessness] are critical issues in communities where we do business in the U.S.”

Along with scholarships for team members and ongoing revitalization initiatives in its hometown of Atlanta, Chick-fil-A anticipates about $32M in cash gifts in 2020.  The new giving structure moves away from the multiyear commitments Chick-fil-A had with the Salvation Army and the FCA and focuses on annual grants, which Tassopoulos said will be reviewed and assessed each year.

Future partners could include faith-based and non-faith-based charities, but the company said none of the organizations have anti-LGBT positions. While the philanthropic shift is an acknowledgment that past giving has hurt the company’s brand, it hasn’t negatively impacted sales.

Chick-fil-A surpassed $1B in sales in 2001 and eclipsed the $5B mark in 2013, the year following Cathy’s statement on gay marriage. The chicken chain became the third-largest U.S. fast-food chain this year with $10.5B in sales, according to Nation’s Restaurant News data. Only McDonald’s and Starbucks bring in more revenue among fast-food chains. But after years of “taking it on the chin,” as a Chick-fil-A executive told Bisnow, the latest round of headlines was impossible to ignore. This time, it was impeding the company’s growth.

The San Antonio City Council was voting on an airport concessions contract in March when ThinkProgress reported that Chick-fil-A was still donating to anti-LGBT groups. The Chick-fil-A Foundation had donated $1.8M in 2017 to the Salvation Army, the FCA, and the Paul Anderson Youth Home. A San Antonio city councilor brought up the article at the council meeting, and councilors voted in favor of the concessions contract — as long as a planned Chick-fil-A was dropped from the deal.

The story had ripple effects. Delaware North, the concessions handler for Buffalo Niagara International Airport, also decided in March not to move ahead with plans for a Chick-fil-A at that airport, and officials in San Jose, California, announced they would not renew the chain’s lease at the airport when it runs out in 2026.

The company’s giving history and Cathy’s previous comments on marriage equality have also dealt a reputational blow to its international expansion.  More than 100 LGBT and animal rights protesters showed up to an opening day at Chick-fil-A’s first Toronto store in September. After protests and a boycott by a local LGBT group, the landlord behind a Chick-fil-A pop-up store at a mall in Reading, England, announced eight days into the lease it would not renew with the chain because the mall is meant to “offer an inclusive space where everyone is welcome.” A Chick-fil-A in Scotland is still in operation, but company leaders still felt a new message was needed — especially in foreign markets, where the most prominent brand exposure to Chick-fil-A are headlines about its support for organizations with anti-LGBT stances.

Chris Potter, Flickr Chick-fil-A has been working on the new charitable structure since summer 2018, according to sources familiar with the process, and finally approved it in a board vote last week. But it will still take time for the plan to take effect. The Chick-fil-A Foundation donated $115K to the Salvation Army and $825K to the FCA in 2018, according to a tax form filed Friday with the IRS. A company spokesperson said the donations were the last of multiyear commitments to the two groups.

The company still maintains the donations were made for reasons completely unrelated to the organizations’ stance on LGBT issues. The FCA donation goes toward summer youth camps at the Atlanta HBCUs Morehouse College and Spelman College, according to the tax filing.

Looking ahead, Chick-fil-A leaders told Bisnow the mission of the company is to serve all members of its many communities. But the company also recognizes that changes are needed, especially if some communities don’t want to see a Chick-fil-A sign go up in their backyard.  “When there is tension, we want to make sure we’re being clear. We think this is going to be helpful,” Tassopoulos said. “It’s just the right thing to do: to be clear, caring and supportive, and do it in the community.”

Oct. 15: By Tim Fitzsimons/NBC
Ugandan LGBTQ activist Brian Wasswa died on Oct. 5, one day after the 28-year-old was attacked at home amid rising tensions in the East African nation over its beleaguered lesbian, gay, bisexual, transgender and queer community. Sexual Minorities Uganda, a local advocacy group, said Wasswa’s death was the fourth LGBTQ-related murder there in three months.
The death of Wasswa, who was gay and gender-nonconforming, comes as human rights advocates have been sounding the alarm that the Ugandan government is ramping up pressure on the country’s LGBTQ community by threatening to reconsider the infamous 2014 “Kill the Gays” bill that increased the penalty for homosexuality from life in prison to death.


“When politicians, members of Parliament call for laws, the reintroduction of the ‘anti-gay’ law, they are responsible for this increase in vulnerability in the LGBT community,” Frank Mugisha, executive director of Sexual Minorities Uganda, stated in a press release announcing Wasswa’s death.

Uganda is highly conservative and a dangerous place to be openly gay. In 2010, the local tabloid The Rolling Stone published a list of “top homos,” and soon after, activist David Kato was killed. Many LGBTQ Ugandans have fled the country to seek asylum and refuge elsewhere.
Shortly after Wasswa’s death, Ugandan Minister of Ethics and Integrity Simon Lokodo joined in on the calls to revive Uganda’s so-called Kill the Gays bill, which was struck down by the country’s high court in 2014. In an interview with Thompson Reuters Foundation published last week, Lokodo said homosexuality “is not natural to Ugandans,” and blamed gay people’s existence on “massive recruitment” in schools and among youth.
The Guardian reported that MP James Nsaba Buturo also said the bill would soon be brought forward in Parliament. However, a spokesperson for Ugandan President Yoweri Museveni said there are no current plans to reintroduce the legislation.

In an interview last week with a Ugandan TV station, Lokodo, a former Catholic priest, restated his plan to “bring back the anti-homosexuality bill.” When asked by the interviewer why he wants to reintroduce the bill now, he said, because “the things that were criminalized are still there.”
“The penal code only criminalizes the act,” he added, noting that the reintroduced bill would go further. “Now we are saying anything — like recruitment, promotion, exhibition — amounts to committing a crime against that law.”
Neela Ghoshal, a senior researcher at Human Rights Watch, said that as a government minister, Lokodo does, in fact, speak for the government, but his words should be taken “with a grain of salt.” Every few months, she noted, a Ugandan politician threatens to revive the “kill the gays” bill and “it brings them the political notoriety they want.”
“Even if they don’t move forward with this policy, the kind of statements being made shows that the Ugandan government does not value LGBT Ugandan lives,” Ghoshal said. She added that the Human Rights Awareness and Promotion Forum, the organization that Wasswa worked for, faced several recent attacks that harmed — and killed — security guards outside their facilities.

Email ThisBlogThis!Share to TwitterShare to FacebookShare to Pinterest
Labels: Commerce and Gay Rights