Are Russians Aware Their Government is Taking Them Out of The Internet toRestrict Their Info.

The only time the government can be believed is when there are other sources that are saying the same thing and sources that did not get the story purely from the government. That is what the government of Puting and it's many layers of governmental agencies want to do, they want to be perfect so people will trust them and keep them in power.

My question is are 144.5 (2017) Million Russians will just sit around and let the government do as it wishes? In the past Russians have suffered hunger, lack of money and other necessities but now we are in the 21 century and you would think a country that is spending so much in unique missiles that hopefully will never get used because it will destroy Russia's enemy's together with Russia and everyone else. So, why the investment? If you leave for the government to explain it will tell you it needs defense. The U.S. will say the same. But that does not make sense. Improving and spending more on missiles that will never (hopefully) get used? So far both governments are getting away with it. In the U.S. you have a President that can not tell a single truth and you see in his lips face and you hear it in his voice and in yesterday's truth which today is not. Russia you have the same type of individual President but being an ex KGB spy, you never know what he is thinking and his lies have few emotions. Thank goodness some of us have been given common sense and when something does not make sense no lie can cover it up.

Taking away the Internet and I don't mean Facebook which promotes untruths, but the internet where you learn politics, science, medicine and everything else. What is discovered (if it's not by the government) is there for the average citizen. It's a miracle of the time and you must be pretty backwords to go back on the future. By the way, North Korea has its own internet...With that example, I will tell you no more.

MERRIT KENNEDY/ NPR.org
Russian law has taken effect that, in theory, would allow the Russian government to cut off the country's Internet from the rest of the world.
The "sovereign Internet law," as the government calls it, greatly enhances the Kremlin's control over the Web. It was passed earlier this year and allows Russia's government to cut off the Internet completely or from traffic outside Russia "in an emergency," as the BBC reported. But some of the applications could be more subtle, like the ability to block a single post.
It requires Internet service providers to install software that can "track, filter, and reroute internet traffic," as Human Rights Watch stated. Such technology allows the state telecommunications watchdog "to independently and extrajudicially block access to content that the government deems a threat."
The equipment would conduct what's known as "deep packet inspection," an advanced way to filter network traffic. 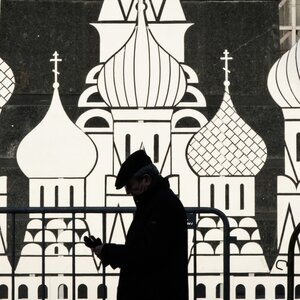 Russia Is Considering An Experiment To Disconnect From The Internet

Such widespread control is alarming to human rights groups, which fear it could be used to silence dissent.
"Now the government can directly censor content or even turn Russia's Internet into a closed system without telling the public what they are doing or why," Rachel Denber, Human Rights Watch's deputy Europe and Central Asia director, said in a statement. "This jeopardizes the right of people in Russia to free speech and freedom of information online."
The Russian government has justified the law by saying it is needed to prevent U.S. cyberattacks. And, as the BBC reported, Kremlin spokesman Dmitry Peskov has rejected the idea the law could be used to cut off Russia from the rest of the world: "No-one is suggesting cutting the Internet."
Regardless of what the government intends, some experts think it would be technically difficult for Russia to actually close its network if it wanted to, because of the sheer number of its international connections.
"What I found was that there were dozens of existing Internet exchange points in Russia, some of which have hundreds of participants — so hundreds of networks coming together there to exchange traffic," says David Belson, senior director of Internet Research & Analysis at Internet Society. Many of them are international network providers, he says, so "basically it's challenging — if not impossible, I think — to completely isolate the Russian Internet."
Belson says that the requirement for Internet service providers to install tracking software will very likely also be challenging in practice. He adds that it will be difficult to get hundreds of providers to deploy it and hard to coordinate that they're all filtering the same content. And blocking certain content could have "collateral damage" — effects that the government hasn't foreseen.
And how will this law ultimately change how Russians use the Internet? "It's not clear," Belson says. "There could be no change." Or, Russians may begin having difficulty accessing certain sites or be redirected to other sites when they request ones that are blocked.
Internet freedom has been on the decline in Russia for at least six years, according to Freedom House. Last year the government tried to block the messaging app Telegram and cracked down on virtual private networks, which encrypt Internet traffic.
Over 5Million Reads Adam Gonzalez at November 03, 2019