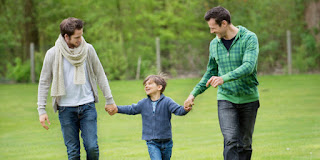 Nineteen years ago, when Greg Thomas and Ron Preston adopted Samantha, they didn’t expect the process to run so smoothly. “A lot of that had to do with the attorney we had,” says Thomas, who lives with his family in Wichita Falls, Texas. “His wife was one of our best clients. And she was rooting for us and pulled every string in the system to make sure this was going to happen.”
Same-sex couples looking to adopt in the future might not be in so lucky. On November 1, the first day of National Adoption Month, the Trump administration issued a notice of nonenforcement from the U.S. Department of Health and Human Services proposing to override the Obama administration’s anti-discrimination law, which included gender identity and sexual orientation as federally protected classes. If the rule becomes final after an upcoming 30-day comment period, Department-funded faith-based adoption or foster care agencies would be within their rights to deny same-sex couples or LGBTQ persons from adopting a child, a decision many belief treats children as commodities to be traded rather than people deserving of safe and loving homes.
When we talk about selective adoption, we often concentrate on the injustice of denying the rights of same-sex couples. But more than 100,000 children in foster care cannot be returned to their biological families and thus await adoption. Is their right to the best chance at a family not also denied when adoption agencies are allowed to discriminate against members of the LGBTQ community? Prohibiting same-sex couples from adopting a child not only bottlenecks the adoption process but also sends children the message that identifying as anything other than cisgender is inherently wrong. Compounding this trauma is the fact that many LGBTQ youths entered the child welfare system because they had been rejected by their families, according to research from the Child Welfare League of America.
“Young people in foster care are now being subjected to living in this fear that their identity is something wrong or bad, and that because of it, they will have less of a chance of finding a safe, loving home,” Denise Brogan-Kator, chief policy officer at Family Equality, an LGBT advocacy and support organization, tells Well+Good.
Same-sex couples are valuable assets to child welfare since they’re more likely to adopt children of color or those with disabilities, both of which are overrepresented in the foster care system, according to Abbie Goldberg, PhD, author of Open Adoption and Diverse Families and psychology professor at Clark University in Worcester, Massachusetts. “LGBTQ parents are a resource for, not a drain on, the child welfare system,” she says.
Of the estimated 442,995 children in foster care, according to the Department of Health and Human Services Administration for Children and Families, racial and ethnic minorities comprise 53 percent of the population. A study published in the journal Children and Youth Services Reviewfound that up to 47 percent of the child welfare system population has some form of disability (compared to less than eight percent of the general youth population), with same-sex couples more likely to adopt children with special needs. In the child welfare system, children with disabilities are also more likely to be mistreated, abused, and overlooked, warranting an even greater pressing need for committed adoptive parents.

“Barring LGBTQ people from adopting or fostering makes no sense from a child welfare or economic perspective.” —Abbie Goldberg, PhD

Numerous large bodies of research cite equivalent parenting styles across a variety of orientations and identities, with a landmark study from the Journal of Marriage and Familyshowing that children adopted into same-sex or LGBTQ families are equally well adjusted both socially and academically. “Trump is not basing his agenda on empirical research, period,” says Dr. Goldberg. “Barring LGBTQ people from adopting or fostering makes no sense from a child welfare or economic perspective.”
Thomas, a devout Christian, explains that he proudly raised his daughter Samantha with his partner even at the expense of his relationship with his traditional parents. “I was raised in the Church of Christ so all of this was craziness to my parents, and they didn’t know that we were going to do this,” says Thomas. “So the day Samantha was born, I called to tell them. My mother said, ‘Oh, did you get another dog?’ and I said, ‘No, mom, it’s a little girl.’ ‘Well, what are two gay guys doing with a little girl?’ and I said, ‘Mom, we’re just going to love her.’”
And love her they did. “They have always treated me like they gave birth to me themselves,” Samantha tells Well+Good. “Never missed a basketball game or a dance recital. Been there for homework and boy troubles. Gave me a roof my head and unconditional love.”
If the ruling does become final, Dr. Goldberg says not all hope is lost for youth in the child welfare system and their prospective same-sex parents. “Many agencies and social workers do recognize LGBTQ people and parents as incredible resources when it comes to fostering and adopting, and this cannot be overstated,” she says. “Not all agencies want to engage in and nor will then engage in discriminatory practices.”
And if the ruling does not make it past the 30-day comment period, Brogan-Kator says the administration’s proposal still raises an important question: “If the government allows us to be discriminated against here, where else can we be discriminated against?”
Over 5.6 Million Reads Adam Gonzalez at November 12, 2019