A gay penguin couple at a Netherlands zoo has stolen an egg from another family and is trying to hatch it.
The pair are two gay male African Penguins at the DierenPark Zoo in the city of Amersfoort. Zookeepers suddenly discovered them nesting an egg alongside heterosexual couples.
“The gay couple is looking after the egg very well and takes turns in keeping it warm,” zookeeper Marc Belt told Dutch News.
“Homosexuality is fairly common in penguins.
“What makes this couple remarkable is that they have gotten hold of an egg.”
The zoo said the gay couple took the egg from a heterosexual couple who went on to produce another, the zookeeper said.
They hope the gay couple’s egg will hatch, however, it’s not yet certain if the egg has been fertilized.
It’s apparently quite common for male penguin couples to form relationships.
Several zoos around the world have given their own gay penguin pairs abandoned eggs to hatch and raise.

In Sydney, our own gay penguin couple Sphen and Magic welcomed their first foster baby last October.
The Gentoo penguin duo lives at Sydney’s Sea Life Aquarium. The pair went viral last year when staff announced they were inseparable ahead of the breeding season.
They bowed to each other – a common way of showing love – and built an ice pebble nest together for the breeding season.
Staff later gave them a foster egg from a mother who had two. Their baby girl, named Sphengic, celebrated her first birthday in October.
Last month, the staff announced they gave the couple a second egg. However, we’re still waiting to see if it was fertilized. Fingers crossed!
For the latest lesbian, gay, bisexual, transgender, intersex and queer (LGBTIQ) news in Australia, visit qnews.com.au. Check out our latest magazines or find us on Facebook, Twitter, Instagram, and YouTube. 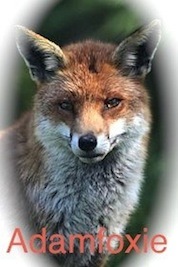 Good Morning Sunday!
On Sunday morning adamfoxie Blogspot is going to take Sunday morning off and if we publish it will be something to do with nature and how involved we should be with the animals that surround us. You don't have to be an animal lover but only a person that doesn't mind sharing the planet with all the other species that make this planet a beautiful habitat. I there is nothing publish is because we took that particular Sunday as a day of rest.