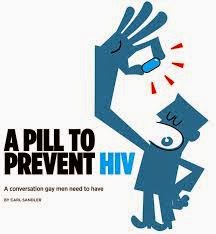 The Department of Health and Human Services is suing Gilead Sciences over the patent rights to Truvada, Gilead’s HIV prevention drug better known as PrEP, or pre-exposure prophylaxis.
PrEP is a pill taken once daily that is 99 percent effective at preventing HIV transmission, according to the Centers for Disease Control and Prevention.
The lawsuit, filed Wednesday in U.S. District Court for the District of Delware, alleges that CDC researchers began studying the preventive use of HIV treatment drugs — like tenofovir, or TDF, and emtricitabine, FTC, the two compounds in a Truvada tablet — as early as 1998, before Gilead sought a patent.
Crucially, the lawsuit alleges that the government owns the PrEP patent for both Truvada and Descovy, Gilead’s next generation PrEP approved last month, setting up the possibility that both HIV prevention drugs could see drastic price reductions.
“HHS recognizes Gilead’s role in selling Truvada and Descovy to patients for prevention of HIV. Communities have put these drugs to use in saving lives and reducing the spread of HIV,” HHS Secretary Alex M. Azar II said in a statement. “However, Gilead must respect the U.S. patent system, the groundbreaking work by CDC researchers, and the substantial taxpayer contributions to the development of these drugs. The complaint filed today seeks to ensure that they do.”
In response, Gilead said the government’s patent claims were “invalid.”
“We are surprised that the government has requested that a district court judge and jury look at the same issues of patent validity that the Patent Office will be deciding,” Gilead said in a statement Thursday. “We will be asking the district court to stay the litigation until the Patent Office has an opportunity to undertake the review that we already have requested.”

The PrEP4All Collaboration was formed in summer 2018 to advocatethat the U.S. government “break the patent” by exercising its “march-in rights” and requisition Truvada for emergency public health purposes.
James Krellenstein, another member of the collaboration, said that shortly afterward the group’s founding he received a phone call from one of the doctors who discovered PrEP.
“He gave me a ring and said, ‘You should know that in addition to the government having march-in rights on the patents that protect Truvada, the federal government actually owns independent patents that protect the use of Truvada and Descovy as PrEP.” That led Krellenstein and others to research the various patents that apply to the compounds, formulations and uses of these drugs for prevention purposes. “He was advocating very, very strongly because he was appalled about the price gouging that Gilead was doing with his invention and the massive barriers that caused for uptake,” Krellenstein said of the doctor who called him.
Christopher J. Morten, an NYU researcher and a lawyer for the PrEP4All Collaboration, said, “Gilead knew at least from 2008 that it was at risk of liability of patent infringement if it sold Truvada or Descovy as PrEP.”
The lawsuit lays out a timeline that alleges Gilead contributed nothing more than donated Truvada tablets to multimillion-dollar human trials that were funded by the U.S. government and philanthropic donors.

On Aug. 2, 2004, Gilead Sciences received FDA approval for Truvada as a drug to treat, not prevent, HIV. At the time, Truvada was considered one of the least toxic combination HIV-treatment tablets. But in 2004, research was already underway on whether the drugs contained within Truvada tablets could also be an effective way to prevent transmission of HIV.
That is because, “in the mid-1990’s, high doses of subcutaneous tenofovir alone had been shown to have prophylactic activity in macaques exposed intravenously to simian immunodeficiency virus (SIV), a virus similar to HIV,” the lawsuit states.
A report published in 2004 by the AIDS Partnership California and Center for HIV Prevention and Treatment Services shows that in the same year that Gilead’s Truvada received FDA approval for use in treating HIV, five separate human trials were planned in countries around the world to test the efficacy of tenofovir alone as PrEP. According to that report, the studies were sponsored by the CDC, the National Institute of Allergy and Infectious Diseases and the Bill and Melinda Gates Foundation. But those studies failed to show that tenofovir, or TDF, alone could protect against sexual transmission; protests in Cambodia led the government to shut down the trials.
“While two-drug regimens would generally be considered more toxic, the CDC researchers hypothesized that the inclusion of FTC — as an effective antiretroviral drug with relatively low toxicity — could add more protection than seen with TDF alone. The CDC researchers were the first group to take the innovative FTC/tenofovir prodrug combination path in PrEP preclinical or clinical studies,” the lawsuit states.
The lawsuit also states that CDC researchers discovered the proper dosage, used proprietary animal modeling techniques, and painstakingly recreated the environment of sexual transmission in macaques.
A 2008 report on the results of a CDC primate trial by government-funded researchers showed that a combination of the two drugs found in Truvada worked better than TDF alone. That study states that the authors have a competing interest: They “are named in a U.S. Government patent application related to methods for HIV prophylaxis.” That study said that the promising results of the macaque trial “support PrEP trials for HIV prevention in humans and identified promising PrEP modalities.” According to the lawsuit, those patent applications were filed in 2006 and 2007 and approved in 2015.
After the 2008 study showed that a dual drug regime worked better than a single drug, ongoing human trials were modified to include TDF and FTC, instead of TDF alone. The 2010 results of one of those modified trials, the iPrEX study, effectively proved that Truvada worked as PrEP in men who have sex with men and transgender women.
According to a 2017 AVAC report, these human trials received commercial funding from Gilead of up to $2 million per year — largely the cost of donating the drug — while combined public and philanthropic funding was $29 million to $62 million per year.
“While Gilead’s public statements emphasize the amount of money it has spent to ‘support the clinical trials that led to the approval of Truvada for PrEP,’ that claim is disingenuous,” HHS wrote in a press release. “Its support of early clinical trials was typically limited to only the donation of study drugs. Only after the commercial success of Truvada for PrEP did Gilead increase its funding of PrEP clinical trials, and in particular, trials related to Descovy for PrEP.”
Following the successful results of the iPrEX and other studies, in July 2012 the FDA approved a second use for Truvada: as a HIV prevention pill for high-risk populations like gay men and injection drug users. Gilead did not advertise Truvada for prevention because it was still controversial. Prescribing guidelines for clinical providers were not published until 2014. Television ads only began in May 2018. In the meantime, Gilead earned billions from sales of Truvada — $3 billion in 2018 alone.

The HHS press release states that the Patent and Trademark Office granted four patents to HHS for PrEP. “These patents entitle HHS to license CDC’s PrEP regimens and receive a reasonable royalty for their use. Two other companies that manufacture generic equivalents of Truvada for PrEP in foreign countries have agreed to licenses with HHS.”
Krellenstein said the PrEP4All Collaboration’s next task is ensuring that whatever royalties the U.S. government may obtain from its lawsuit against Gilead — which could be in the billions — are spent on ensuring the drug gets to the estimated 900,000 at-risk people who are still not taking it.
“The government must ask to both simultaneously increase access to the drug” by lowering the price, allowing an earlier generic, or providing the drug for free to clinics, Krellenstein said, and use any royalties obtained “to fund a national prevention program that guarantees anyone in the country who wants it can get it.”
Tim FitzsimonsNBC News
Over 5.6 Million Reads Adam Gonzalez at November 09, 2019