Trump Names Lawyer For Fed.Judge Who Fought At the Supreme Court Vs.Gay Marriage ⧭⧭ Should He Be Approved? 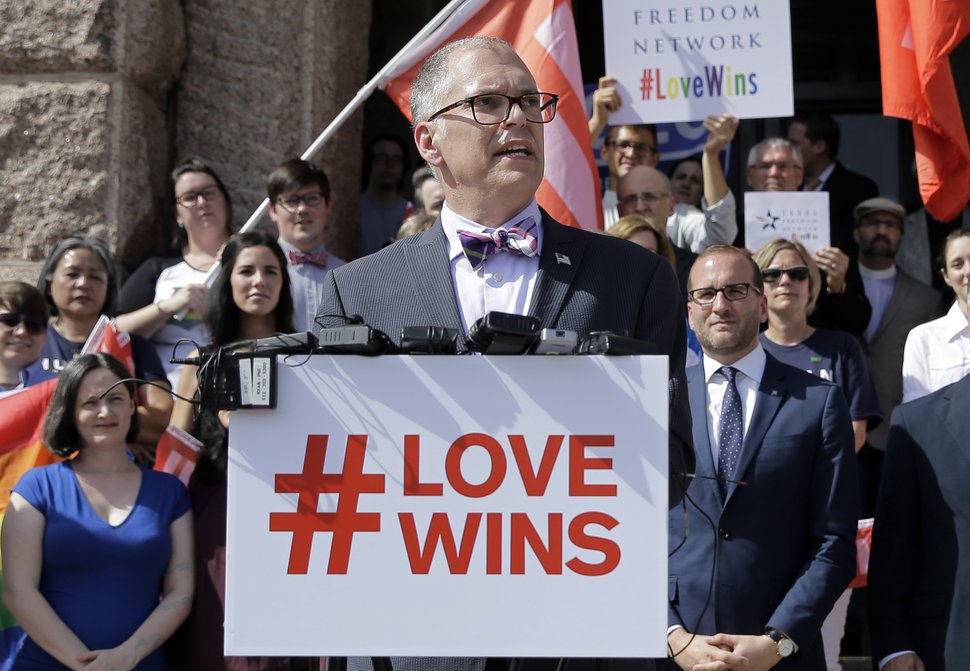 In this June 29, 2015 photo, Jim Obergefell, the named plaintiff in the Obergefell v. Hodges Supreme Court case that legalized same sex marriage nationwide, is backed by supporters of the courts ruling on same-sex marriage on the step of the Texas Capitol during a rally in Austin, Texas. The Supreme Court declared that same-sex couples have a right to marry anywhere in the United States. It was 2004 when Massachusetts became the first state to allow same-sex couples to marry. Eleven years later, the Supreme Court has now ruled that all those gay marriage bans must fall and same-sex couples have the same right to marry under the Constitution as everyone else. (AP Photo/Eric Gay)
By Jim Obergefell | For The Washington Post
In March 2013, Sen. Rob Portman, R-Ohio, broke with his Republican colleagues and penned an op-ed in the Columbus Dispatch supporting same-sex couples' right to marry, a conclusion he reached shortly after his son came out as gay. In the article, he expressed his desire for each of his three children to have "the same opportunities to pursue happiness and fulfillment" in all aspects of their lives. So I was surprised to find out that Portman was supporting the nomination of Eric Murphy to be a judge on the U.S. Court of Appeals for the 6th Circuit even after Murphy argued against same-sex marriage at the Supreme Court.

Barely four years ago, Mr. Murphy made a forceful argument that my marriage was unconstitutional. As the attorney tasked with defending Ohio's discriminatory ban on same-sex marriage, he used dog-whistles such as "traditional marriage" in his brief to the Supreme Court and argued that "bigotry" had nothing to do with why the state refused to recognize my lawful marriage to my late husband.

The court rejected Murphy’s arguments and overturned that law. In a landmark opinion written by Justice Anthony Kennedy — for whom Murphy himself once clerked — the Supreme Court declared that “it demeans gays and lesbians for the State to lock them out of a central institution of the Nation’s society.” Gay couples “ask for equal dignity in the eyes of the law,” Kennedy wrote. “The Constitution grants them that right.”

Still, if Murphy had been successful, John and I, and tens of thousands of couples like us, would have been denied the right to marry and forced to live as second-class citizens.

Now, Murphy seeks to be a judge who will decide cases such as mine; his renomination was sent to the Senate this week. As a federal judge, Murphy would have immense power and influence over the rights of the LGBTQ community. Judges can decide if presidents can ban transgender soldiers from serving in the military. Judges can decide if people can be fired from their job for being gay. Such decisions would affect people such as me, Senator Portman’s son, and thousands of other LGBTQ people living in the 6th Circuit states of Ohio, Michigan, Kentucky and Tennessee.
In light of his past arguments, Murphy must show he is capable of being fair and unbiased toward the LGBTQ community.

Now that he is no longer obligated to defend the old Ohio law, he should explicitly affirm that my Supreme Court case was correctly decided and vow that discrimination against the LGBTQ community would have no place in his courtroom. Surely there is no longer anything stopping Murphy from showing the same respect and dignity to the LGBTQ community as Kennedy and Portman have.
Until Murphy makes such a statement, Portman and his fellow senators should oppose his nomination.

I was fortunate enough to meet John in 1992 and knew instantly that he was the love of my life. In Portman’s own words, my late husband and I were two people “prepared to make a lifetime commitment to love and care for each other in good times and in bad.” We need senators — on both sides of the aisle — to ensure our community can live free from discrimination at work, at school and in the military.

Portman has already stated his desire to make sure all of his children, gay or straight, have the same opportunities. Now is the time for him to commit to making sure all of his constituents, including LGBTQ families, couples and children, can do the same. He can start by challenging Murphy, and all of President Trump's nominees, to publicly denounce LGBTQ discrimination in any form before agreeing to support their confirmations.